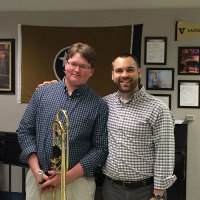 If you’ve been reading my blog for any length of time, you know that my son Liam is a senior in high school and has been following his passion to play the trombone. He’s worked really hard, had all sorts of awesome successes, (along with a couple of disappointments), and auditioned all over the country this past year at 9 different Schools of Music and Conservatories. After ruling out the conservatories as being too focussed, he ended up with 3 Schools of Music within larger Universities that offered him some really fantastic scholarships. In the end, he’s chosen to study with Jeremy Wilson, the trombone professor at Vanderbilt University’s Blair School of Music. Here they are last Fall, when Liam took a lesson with Jeremy after playing principal trombone with the NAfME All National Honor Orchestra in Nashville.

Liam’s very first college audition was last December at Vanderbilt, it was a crazy trip! His “mental toughness” (as Jeremy puts it) in the face of adversity and little sleep stood him well that day. Of course, Liam needed to audition at 8 other schools, each one of them he’d visited twice and had lessons with each of the teachers he would have studied trombone with. Because that relationship is so important, we all wanted to make sure that Liam got along with his teacher (or in some cases, teachers, because there are a couple of schools where you take lessons with all the trombone professors).

Aiyiyi, there’s so much to say and yet at the same time, all I need to say is HOORAY!!!! He’s going to a fabulous school to learn and grow with an incredible trombonist who is also a truly awesome human being…and with a Cornelius Vanderbilt Scholarship, his tuition is totally paid for, along with a stipend for a summer of study abroad!!!!! HOORAY!!!!!

16 Responses to One Moment | The Decision is Made!