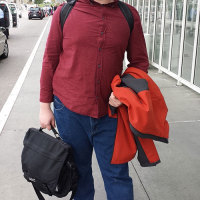 It’s been a busy couple of weeks, especially for my 17 year old Liam! I’ve been sharing his journey as a trombonist here on the blog because it’s a great way for me to keep track and remember all these milestones. I’ve also heard from some longt time readers that they enjoy hearing about it too, so win win!

His first college audition of  was at the Blair School of Music, which is part of Vanderbilt University, Saturday morning, Dec 6. He’s visited the school twice, one time just about 6 weeks earlier, so it was a great way to start the audition circuit. It also was the only one of their 3 audition weekends that fits into the grand plan we’ve mapped out on the calendar. At the music schools/conservatories he’s auditioning for, they either have 3 different audition weekends OR 1 single audition day, and these need to be done in person. They all fit together in such a way though that he CAN audition every place he wants to (assuming that he makes it through the pre-screening rounds, we still haven’t heard about those from 2 of the schools, Northwestern and Juilliard).

The original plan was for Andrew to go with him, because I had the holiday open studio to do, with postcards printed months ago. However, a couple weeks prior Andrew was told he had to do a presentation about the school of music to the Board of Trustees the same day as Liam’s audition, so it meant cancelling his ticket. Andrew spent some time on the phone earlier in the week with the hotel we had booked that was within walking distance of Blair, filling out a form and sending pictures of his credit card, so we thought we had arranged everything. Famous last words….

Anyway, here he is as I drop him off at the airport Friday early afternoon: 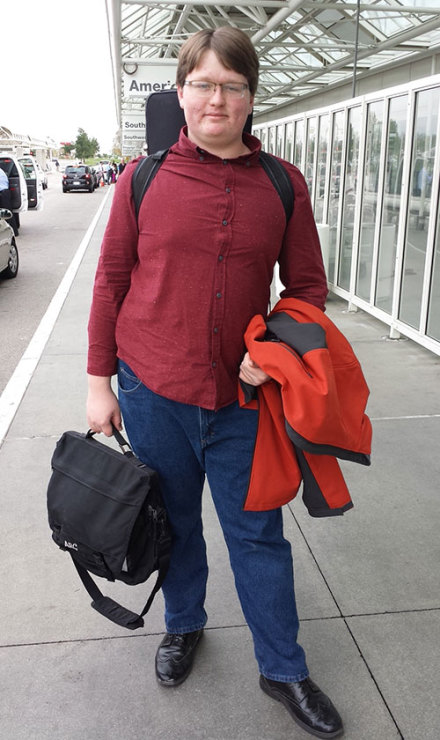 His flights were bothdelayed a bit, so didn’t get into airport until after 11. The shuttle bus we’d paid for shut down right at 11, so he had to take a cab and the cab drops him off at the WRONG Mariott, so he takes a cab to the second Mariott. (I’m finding all of this out by text in the middle of the “Feast of Lights” performance, most of it during the candelight portion so I’m desperately trying to not have anybody see me texting!)

He gets to the right Mariott and the desk clerk won’t check him in because “in the state of Tennessee it’s illegal for anyone under 21 to check into a hotel room”. We find this out 3 minutes from the end of the performance so thank God we can easily sneak out. Andrew calls the hotel and tells the clerk that he had called earlier in the week, explained the situation and filled out 2 forms, one with photocopy of credit card, that were emailed to him back to the hotel so that this would be all taken care of. Liam had the hard copies of these emails.

Desk clerk wanted name of person who did this, we go to Andrew’s office and he boots up his computer so he can find the emails. There is no name on the emails so he can’t tell the clerk what the name of the person was, just that he had called the number, pressed 0, and the clerk on the phone had transferred him to someone else who had said no problem, just fill out the forms. This goes round and round, Andrew says get me your supervisor, who was home. Supervisor gets called and Andrew goes through the whole story all over again.

In the meantime, I tell poor Liam to go lie down on a couch, but thank goodness he doesn’t. He stays right there at the desk and a line of drunk people starts to form behind him!

The new info Andrew finds out is that it’s because there’s a bar attached to the hotel, which is the reason why they won’t check Liam in (?don’t ask me!?) So he finally tells the supervisor, “fine, book him into a hotel that doesn’t have a bar, put him in a cab and don’t charge us a dime”. The supervisor calls the clerk back and tells him something, we don’t know what, but the clerk just hands Liam a key card and starts dealing with the drunks behind him. Whether he was lazy and didn’t want to find the new hotel or whether he wanted to deal with the folks behind him, Liam finally gets to the room at midnight! Phew!

The scariert part was I started texting/calling him at 6AM (4AM our time) and I got no response for 20 minutes. GAH! I was just about to call the clerk (who may have been the same one…) and ask him to knock on Liam’s door when he finally responded!!!! PHEW!!! But I’m now wide awake and get to spend the wee hours of the morning waiting to hear how the audition went!

He ended up getting a breakfast sandwhich from the coffee shop in the hotel, properly navigating the 1.2 miles to Blair, and checking in right on time, 7:45 for an 8:45 audition. He mentions a bit of the night before craziness to the admissions guy checking him in, and 30 minutes later Jeremy Wilson, the trombone prof, is knocking on the practice room door to check in with him and make sure he’s ok.

And he was fine! He played really well, with one funky mental slip (he played a spectacularly wrong note early in the slow orchestral excerpt, the “Tuba Mirum” from the Mozart Requiem). He stopped and asked for a re-start and  then played it as it should be played. He was especially happy with his “Bolero” excerpt – I’m sure you all know the tune, what you may not know is that the trombone solo is really quite high for them and it’s a very challenging excerpt to play. He also thought to snap a picture of Blair after the audition and post it on Facebook, that made me, the social media maven, very happy!

I realize as I’m writing this that most folks don’t know how a college audition would go. You usually have 10 minutes. Yup, all that time practicing for all those years ultimately boils down to how well you can show them what you can do in 10 minutes. You come prepared to play a couple of different etudes, at least one major solo work, and several standard orchestral excerpts. Each school may have a particualar set  of requirements for each of those, and of course those requirements are never the same! Anyway, there are several people in the room, usually at least all the low brass faculty, sometimes more. You hand them the list of what you are prepared for you to play and they start asking you to play things. The major pieces are big, so they’ll choose certain sections they want to hear and either tell you exactly where to stop, or they’ll stop you while you’re playing. The orchestral excerpts are usually quite short, because they’re just the hardest little exposed bits you have to play in an orchestra. Anyway, in 10 minutes, they should have been able to hear enough of how you can play in many different styles, hopefully encompassing all that you are as a musician!

Anyway, after the audition and photo, Liam had to go take a music theory test, and then met with Jeremy Wilson to talk. He then got have an early lunch with a friend who is a Freshman there and then he was able to get his shuttle back to the airport. Although the hotel experience was hellish, it actually probably makes Liam even stronger in their eyes, for him to have played so well after so little sleep. However, we won’t be having him making any other audition trips alone!

No rest for the wicked though! Liam then had to work up a piece he hadn’t played in awhile for his All Southern Honor Groups audition the following Saturday, and finish memorizing 2 pieces for his Spotlight Awards audition the following Sunday! Here he is with his wonderful accompanist Lara Urrutia right after that audition, sigh, the lighting was horrible in the halls of the LA Music Center: 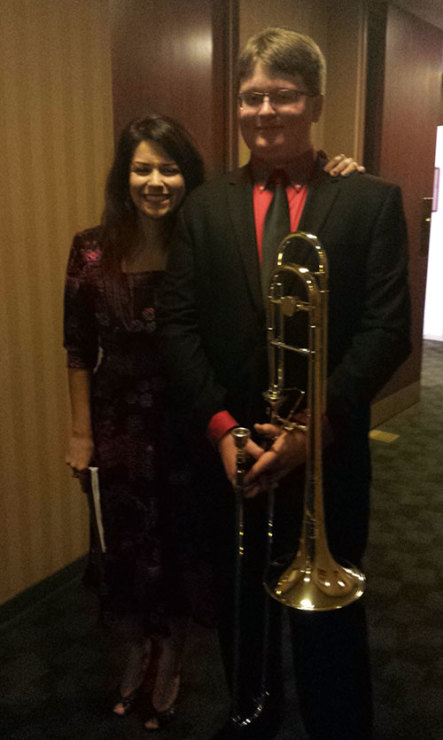 Since we were in LA, we of course had to go get lunch at Pizzeria Mozza: 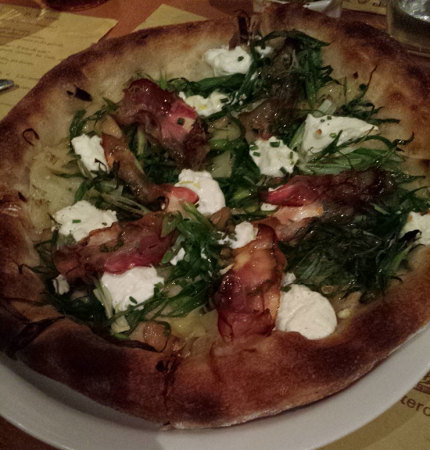 A fun end to a CRAZY couple of weekends!

3 Responses to One Moment | 2 Weekends of Auditions!