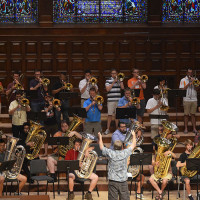 The annual Pokorny Seminar wrapped up last night, it’s been a week full of music! Every year, world class tuba and trombone players come to teach a mixture of college age and older low brass players in an informal manner, with lots of ways to learn from these masters:

This started several years ago when hubby discovered that Gene Pokorny spent his first 2 undergraduate years at the University of Redlands and invited him to do a seminar. The first one was small but VERY well received, and so it has grown a bit and become this wonderful learning experience for low brass players, it certainly was instrumental (hah!) in Liam loving the trombone as much as he does!

Hubby played a recital on Monday night that was a mix of 2 traditional pieces, he was accompanied by the same awesome woman that accompanies Liam, Stephanie Lovell: 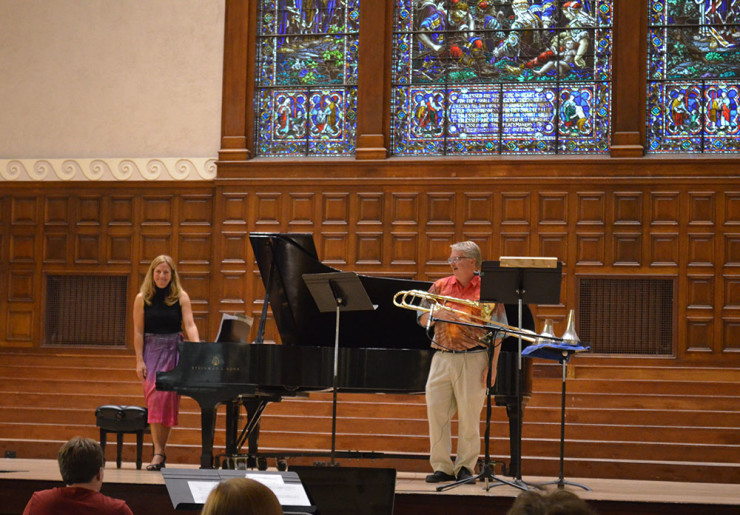 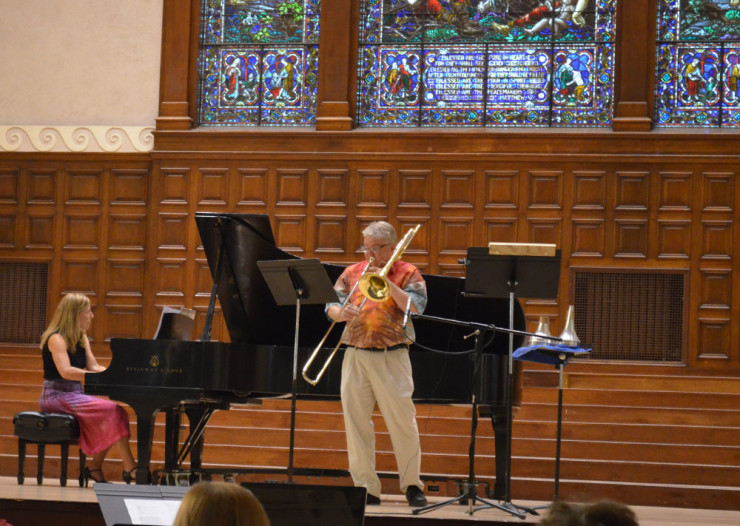 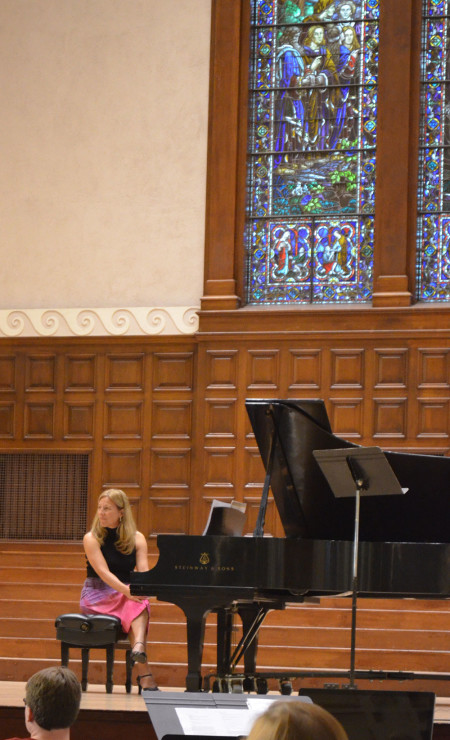 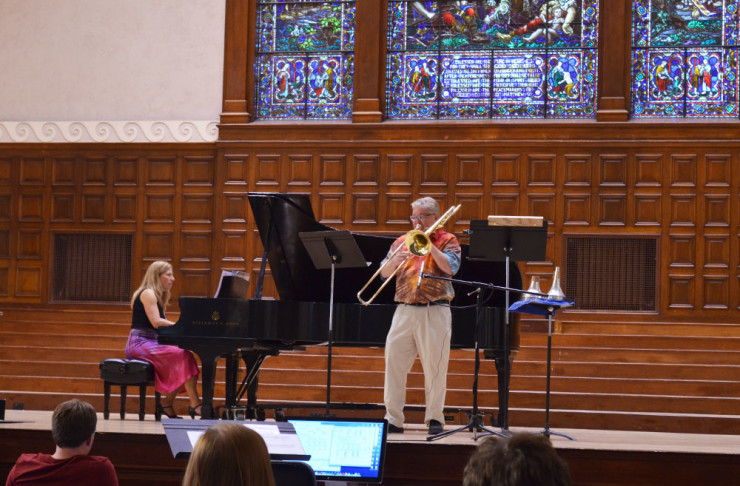 Yup, she’s wearing some Candied Fabrics! A couple years ago she had me make her a black orchid rayon wrap skirt, doesn’t she look lovely?

Hubby then played 2 new music pieces for trombone and electronics. They take a bit of explaining: 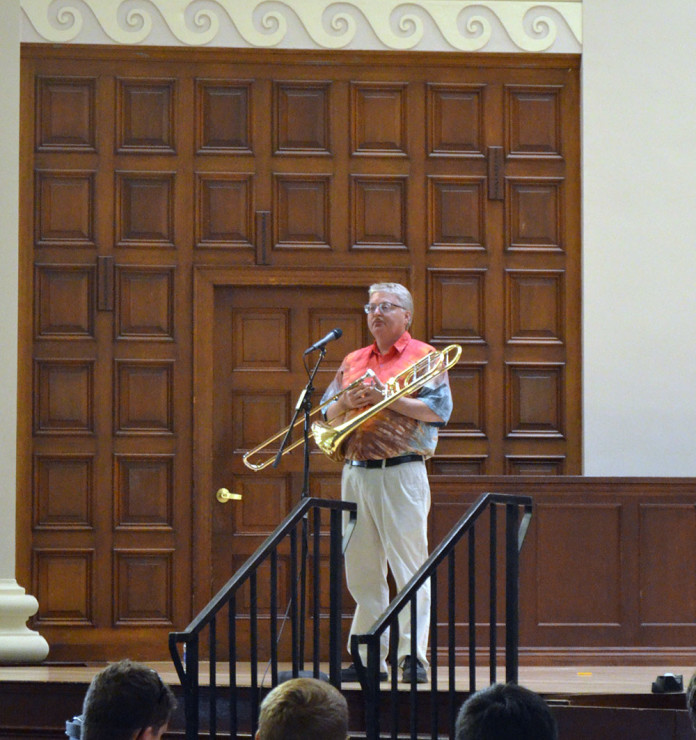 You can see Liam below the stage, he has to follow along and cue different sound effects at different points in time than process what Andrew’s playing in different ways: 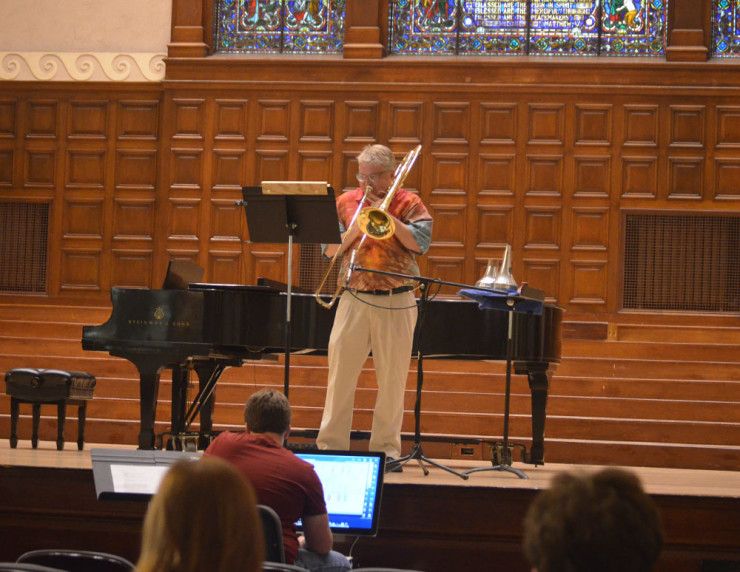 Hubby’s been playing this type of music for a good 25 years now – what’s cool is it’s gone from being dismissed to appreciated in that time!

Right after Andrew, Scott Sutherland played a recital as well, here he is shaking Gene’s hand after they played a duet written for them by the Tubist of the Bejing Symphony, a Minnesotan named Mickey Roblesky who was at the seminar last year: 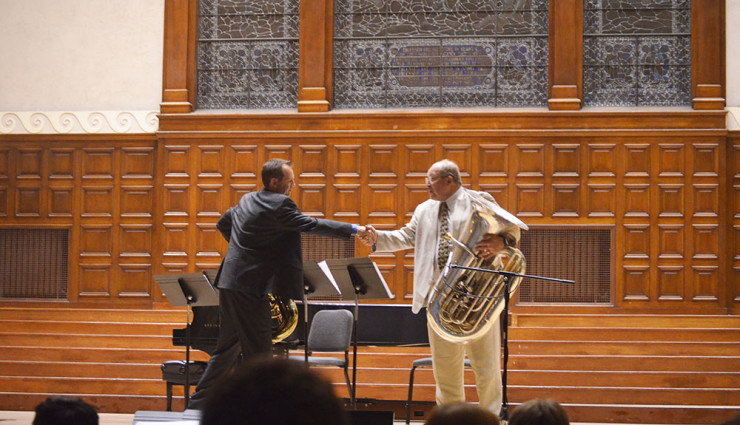 The next night were recitals by Gene and Randy, we missed that because Liam was playing at the Bowl. He got a really nice write-up in the Redlands Daily Facts, which included some excellent pictures: 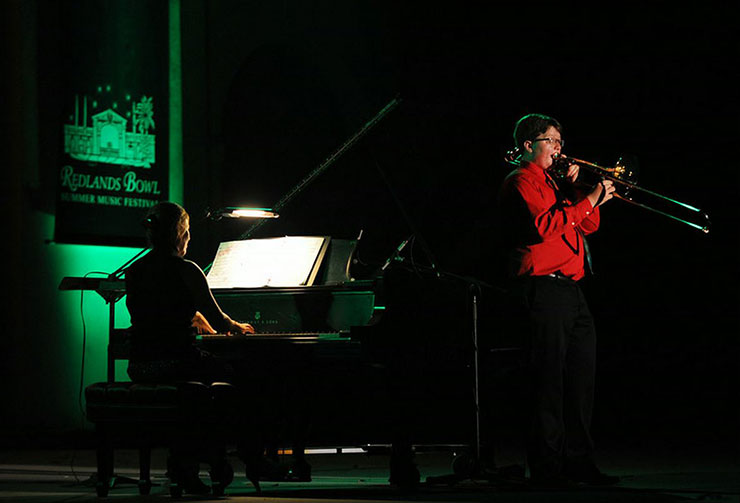 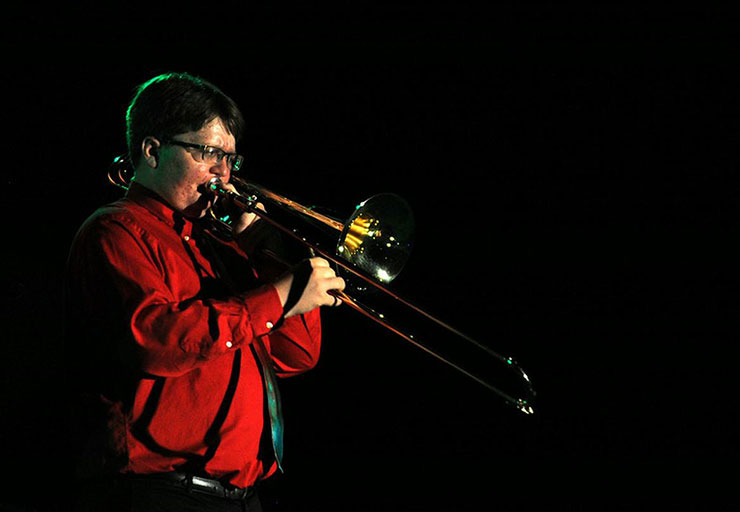 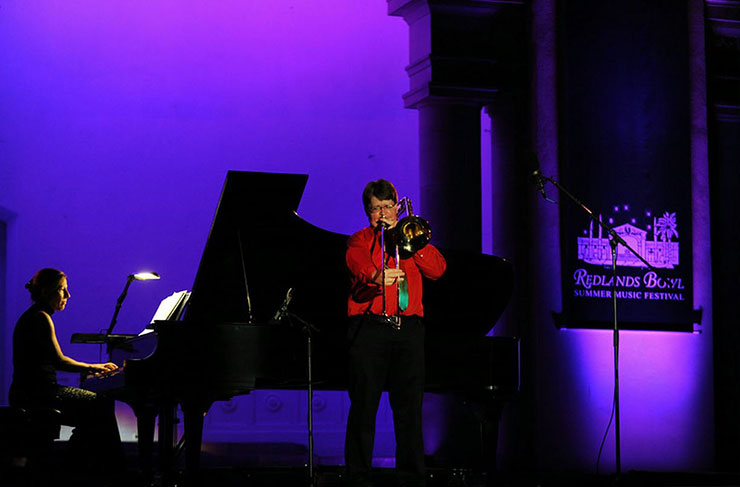 Another reporter from the Riverside Press Enterprise wrote up a story about Liam playing at the Bowl then headed to Carnegie Hall, that was quite a nice surprise!

All of the participants of the seminar gathered on the stage of Memorial Chapel on Wednesday to play the Widor Tocatta with organ, it was truly magnificent! I took these pictures from the balcony: 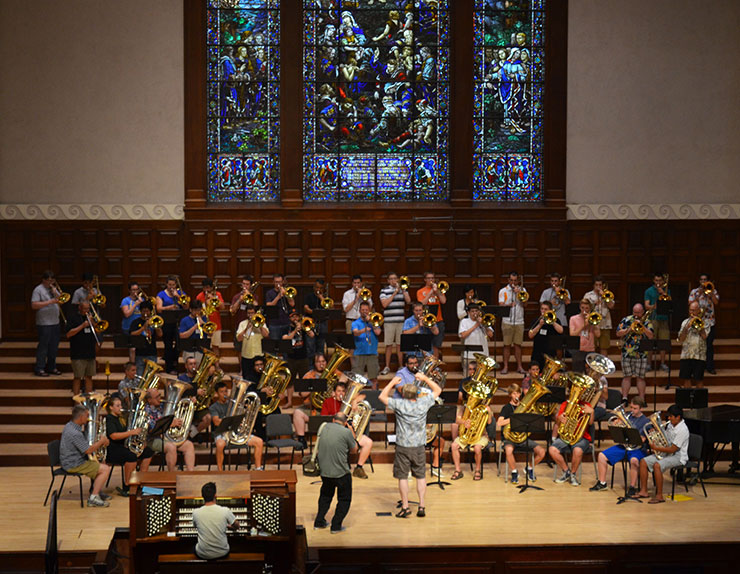 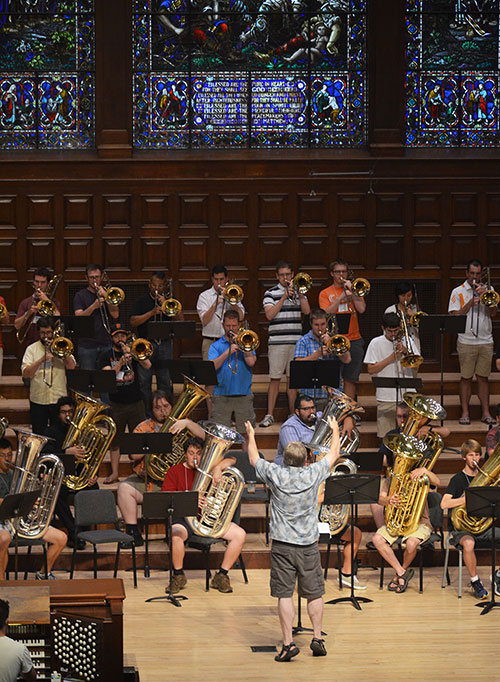 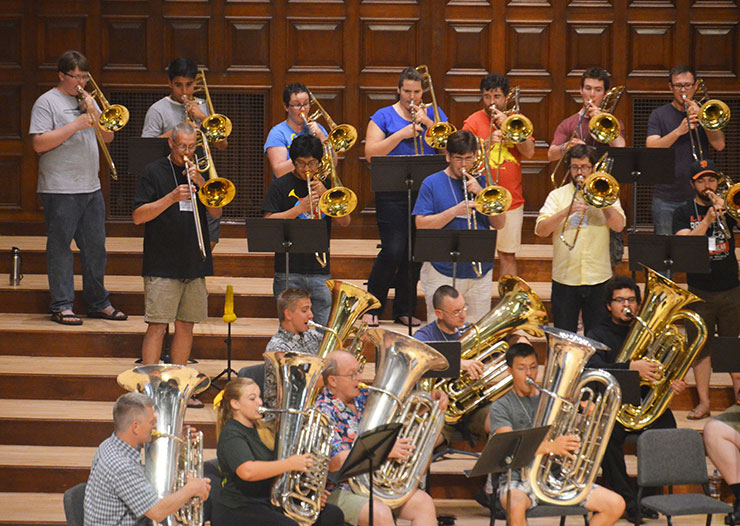 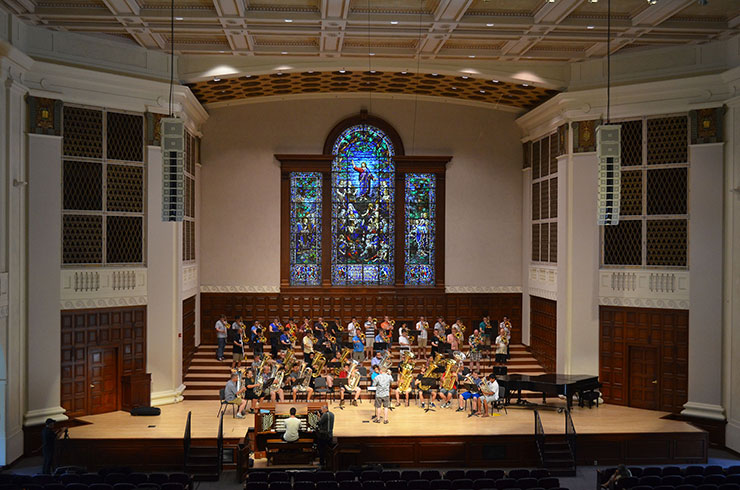 And Greg Schneider took some incredible close-ups all over the group, here are a couple of my faves, gee I wonder why? 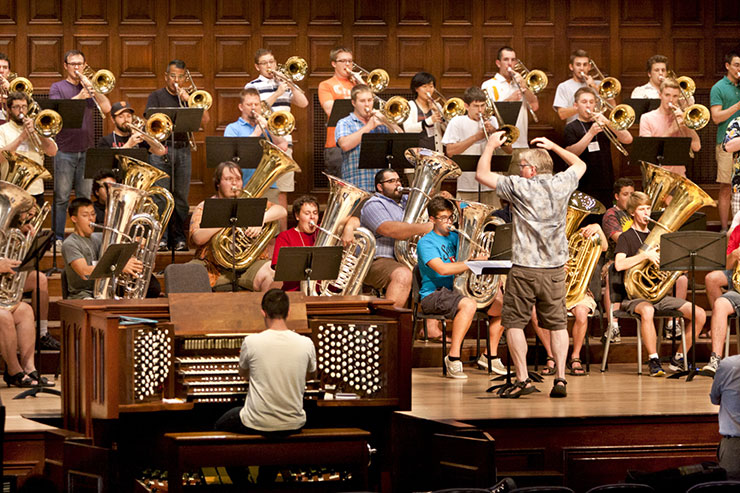 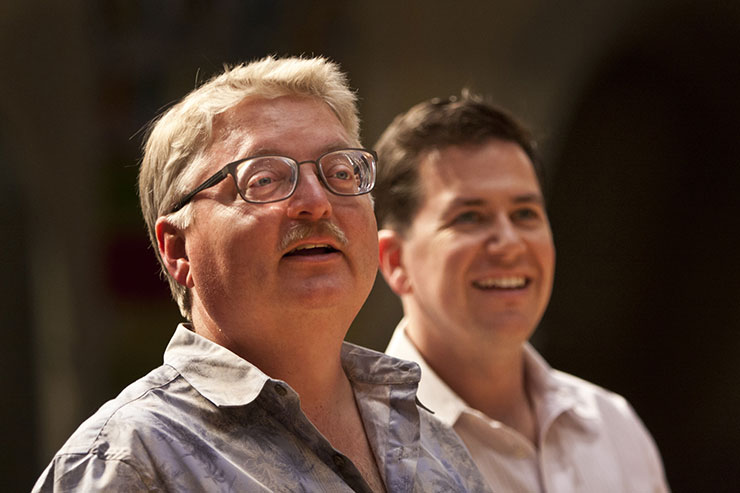 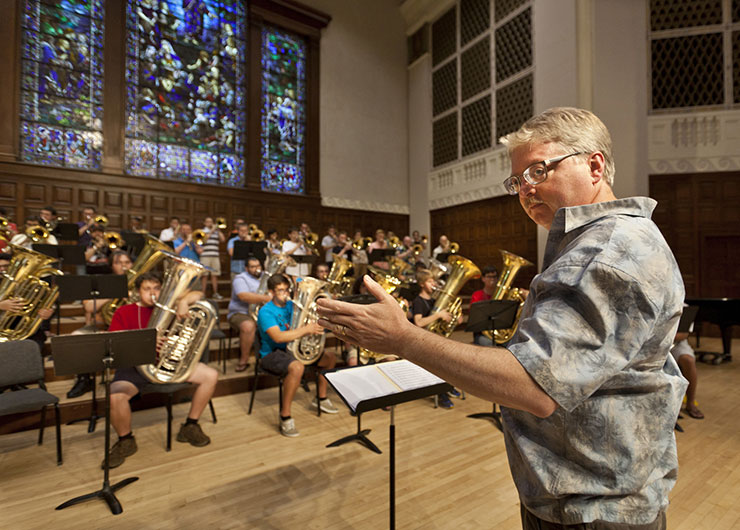 Finally, last night we had a Post Pokorny Pizza Party! It was so great to just hang out and de-compress! There were some moments full of laughter, but I didn’t capture them. But it is so great to see Liam laugh so exhuberantly with these wonderful musicians he looks up to! 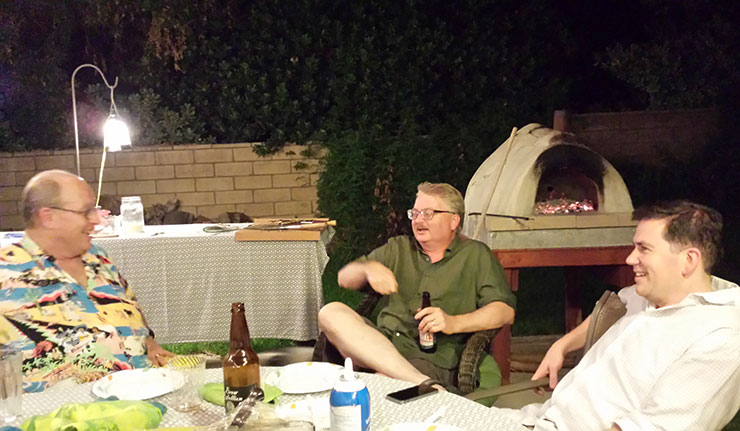 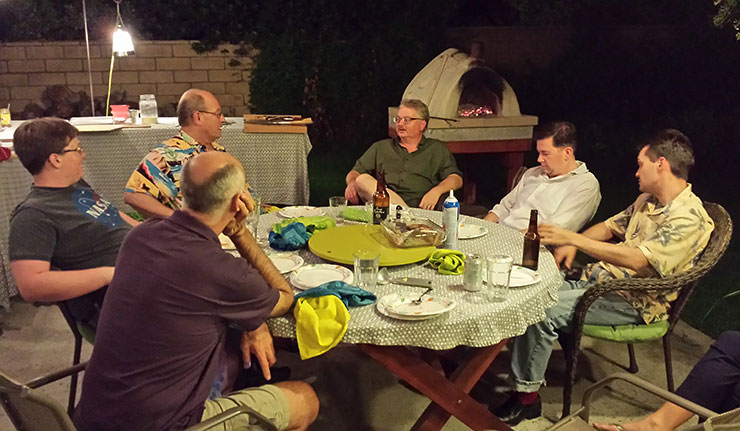 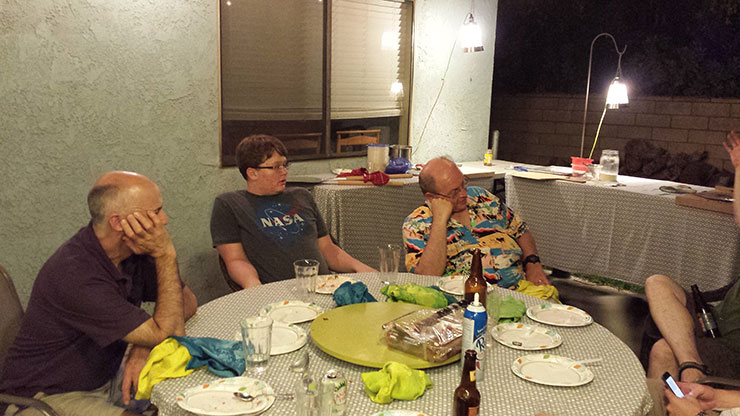 I hope you have a great day today – ours will be spent packing up Liam for his NYO-USA residency and tour, he’s got to be at the airport at 5 tomorrow!!!!

One Response to Another Pokorny Seminar in the Books!