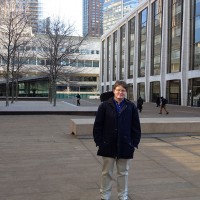 I’ve been sharing my son Liam’s journey as a musician hear on the blog, not only because I want to remember these moments as the years go by, but also because it’s fun to share this with folks who may not know what’s involved in the growth and development in a young musician!

Last Fall, Liam sent a tape in to the American Trombone Workshop, a trombone conference run by “Pershing’s Own” Army Band. It’s a four day event with all sorts of different performances, master classes, competitions and talks.  There are several solo competitions, one of which Liam was eligible for: division 1 (age 19 and under) Tenor Trombone. He was one of 3 finalists, (the other 2 were a Senior in High School and a college Freshman), invited to the conference out in Virginia. Lucklily, it was the second week of his Spring Break from high school and Hubby has a LOT of vacation days, so not only did they go East for the conference, but Liam also toured and took lessons with the trombone professors at Julliard and the Manhattan School of Music in New York, and Curtis Institute of Music in Philadelphia.

Having a lesson with someone like this, a year before you would audition to be a student at the school, has a couple of different functions. First, it can give you an idea of how the teacher actually teaches, and whether or not you would flourish in that kind of environment. Second, although nerve wracking, it’s certainly less nerve wracking when it’s actually audition day, so you can get a feel for the school and the students. Third, the teacher will probably tell you aspects of your playing that they’d like to see you improve on – they’ll probably remember this and notice whether you’ve actually improved when you’re there for an audition a year later, and that would be a great positive!

Anyway, they had quite a busy week! Andrew is not the photographer I am, so hardly any pictures were taken.

Here’s Liam standing in Lincoln Center, Julliard is that building directly behind him: 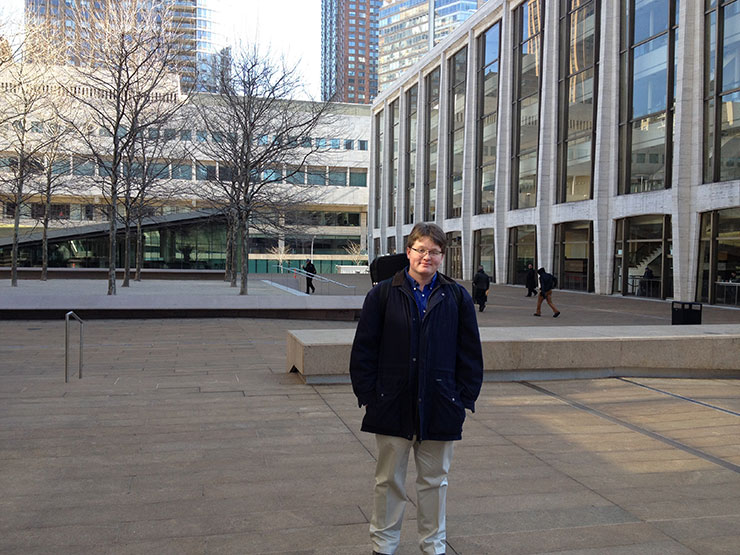 Of course, the Met is close by: 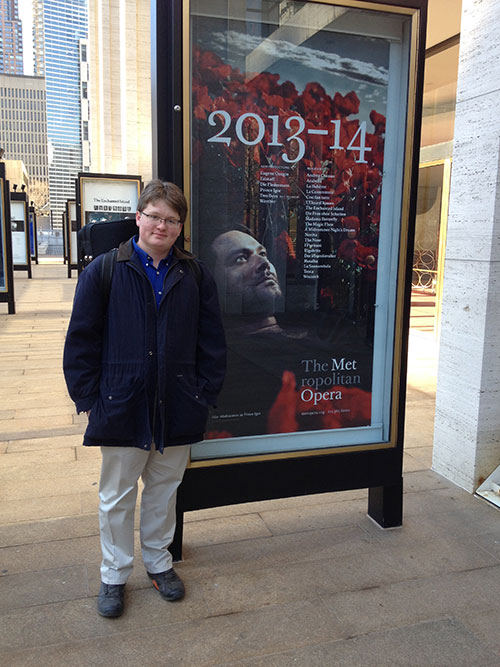 They spent Tuesday morning getting a quick tour from a Freshman trombone player Liam knew and taking a lesson with Joe Alessi, principal Trombone of the New York Phil.

They then spent the afternoon in Manhattan, stopping by the Riverside church that the organ professor at the UoR used to play at: 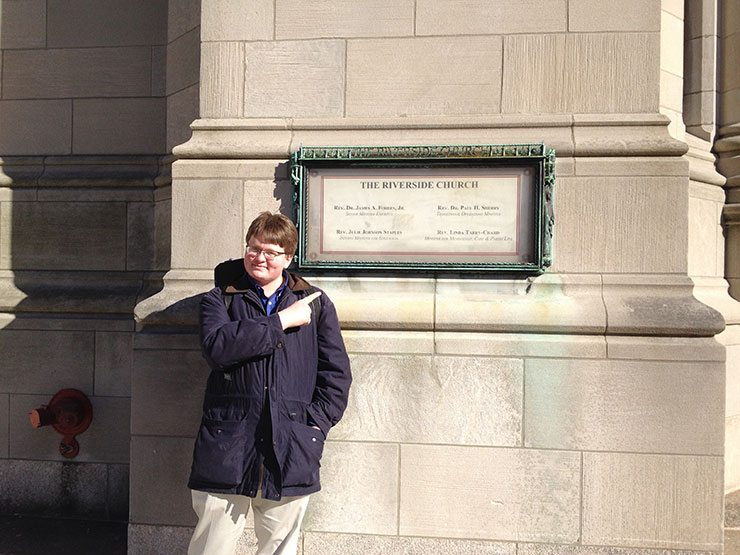 It is HUGE! Andrew says like 2 blocks long. Then, they toured the Manhattan School of Music and Liam took a lesson with Per Brevig, he played in the Met Orchestra for years and years and teaches now at both Julliard and Manhattan SoM. He actually was Andrew’s professor for 2 years at Oberlin almost 30 years ago.

Next morning, they drove to Philly and toured Curtis and Liam had a lesson with Matt Vaughn, acting principal of the Philadelphia Orchestra. They than had some fantastic pizza cooked in a coal fired oven just a couple blocks away from Curtis: 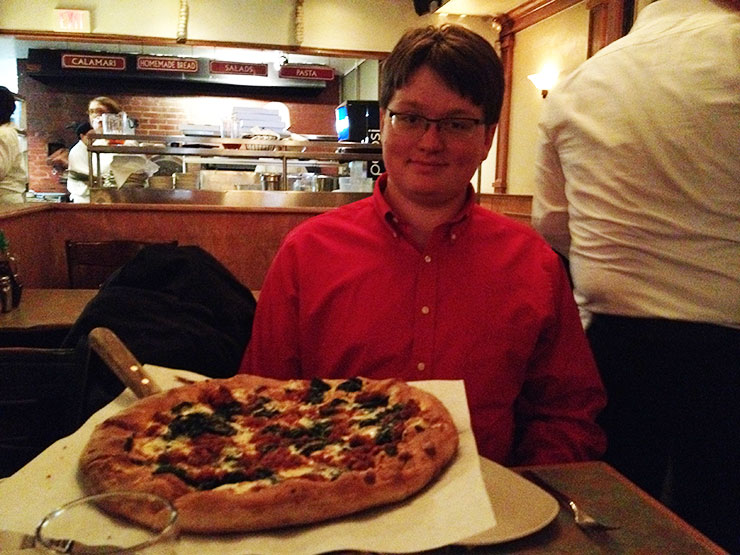 Then they headed south to Virginia and 3 days of All Trombone All the Time!

Liam was playing in the competition while I was teaching, I spent a couple of antsy hours trying not to peek at my phone too much! But since they heard all 3 divisions of the competition before announcing the winners, I was back in my office before getting this text from Liam:

(Liam hasn’t mastered the use of exclamation points like I use them!)

Yep, he won, we are all pretty darn stoked!

Here’s a video of his performance, actually it’s of the whole day. If you’d like to hear him play, scrub forward to 2:57:00 (I found rew that I had to turn my speakers up pretty high to hear it, so the tone quality isn’t the best)

Later that day, he took part in a Master Class (which is like a lesson in public, with other people watching) with Toby Offt, principal of the Boston Symphony and teaches at New England Conservatory.

He had nothing but great experiences at all those lessons and has a clear idea of what he whould be working on, so he’s back to practicing with a new sense of purpose!

That was the week before last, last week he spent catching up on makeup work from the week he missed with his big Indiana trip, and playing in a quartet with 3 of Andrew’s UoR students:

He’s been playing with these guys every Friday this year. They played “Bolos” by Jan Bark, it’s a really fun piece that includes he and another trombonist arguing through their mouthpieces!

Finally, he had the Rotary Club’s District Competition on Saturday. He won our local group’s instrumental competition a month or so ago, here he is with the sponsor/organizer Rod: 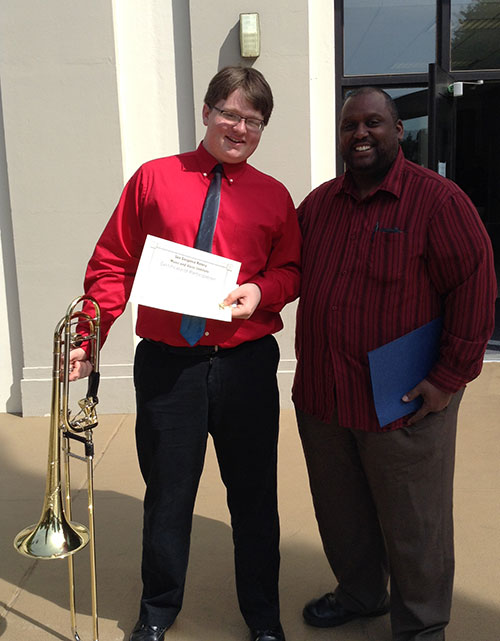 This level had finalists from a much larger district, here’s the entire group: 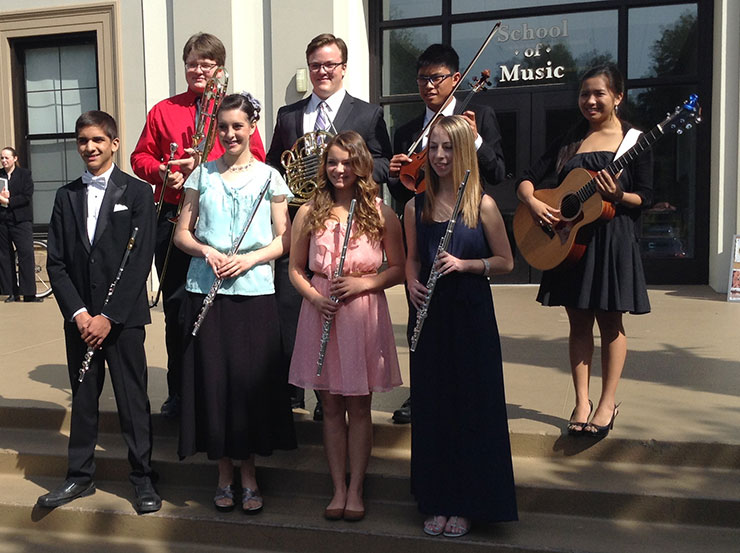 We were a bit worried about this competition because comparing trombonists with other instruments can be hard, especially if the judges aren’t brass players. We tried to lower Liam’s expectations because of this, and were all pleasantly surprised when he came in second place! He won $150 for the winning the first level, and another $500 for the second place, woowoo!

Yes, he’s been having some really exciting experiences! We are very proud of him, and ready to keep encouraging him to work harder and practice smarter!

5 Responses to So Many Proud Mom Moments!