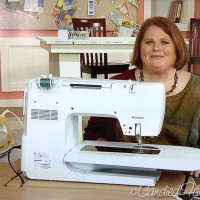 Oh my GOSH! I have been just busting at the seams to blog about my trip to Cleveland last week to film 4 episodes of Quilting Arts TV! However…I’ve also been super busy, so I had to put blogging on hold til I got life back under control!

First of all, there’s not a lot of flight options from Ontario, CA to Cleveland, OH, so I ended up arriving late Saturday night with all of Sunday to try to adjust to East Coast time and to prep for everything that had to happen on Monday.

I unpacked my super full suitcases and the laid out all my stepouts on the big bed: 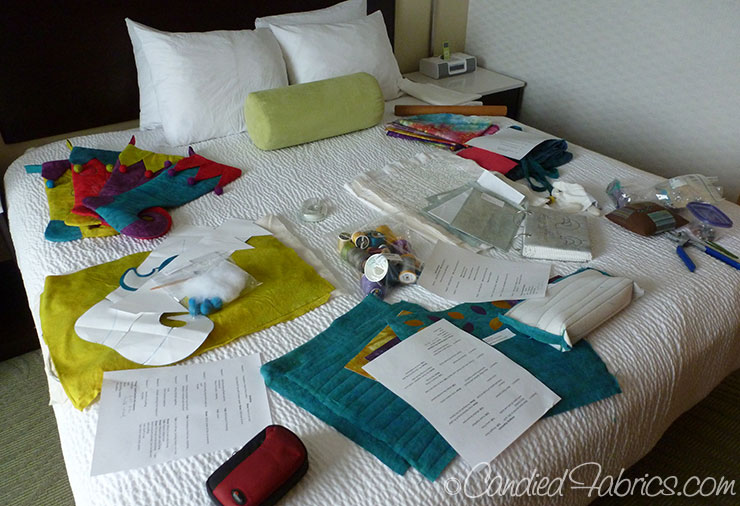 To prep for these tapings, I type out labels for everything, with quick descriptions of what I’m going to say/do with each stepout. When I print the label page out on paper, it becomes a nice little step by step list for me to go over when thinking about what I’m going to do. 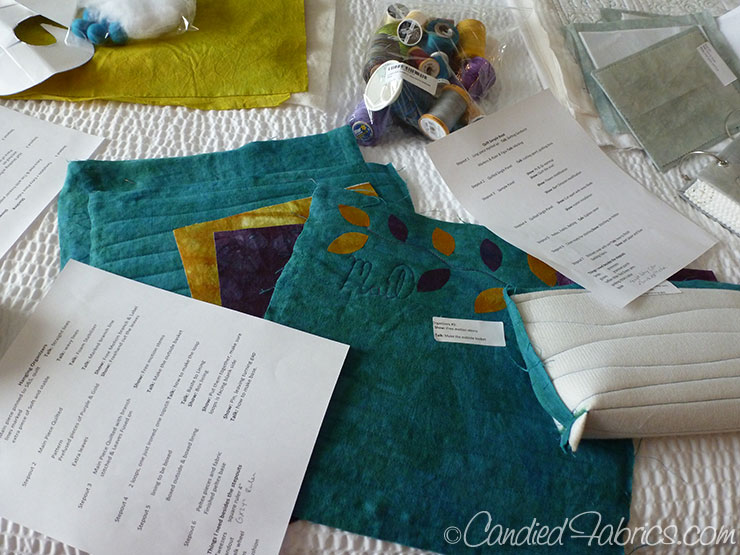 My room also had the most awesome little kitchenette with a nice deep sink! I got all my dyes ready for my dyeing segment really easily; it was a lot less stressful than when I had to mix up dyes in a hotel bathroom 2 years when I was filming my Quilting Arts Workshop “Dyeing to Stitch” . 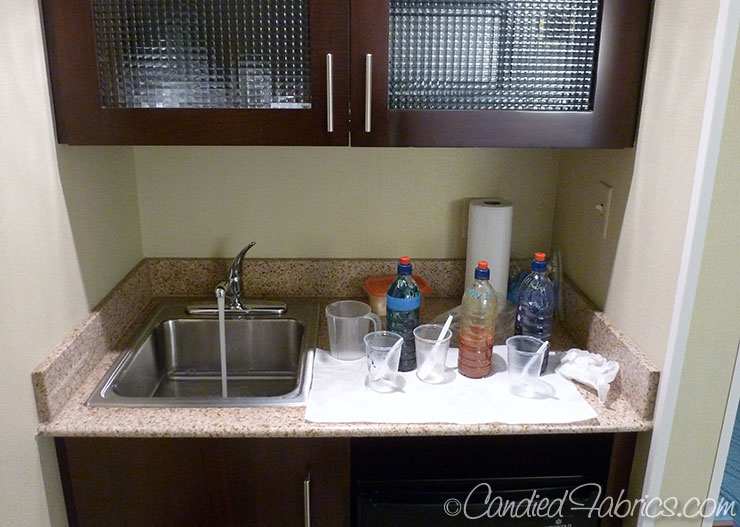 Now, although 4 segments is a lot to prep for, there was more! I am sure some of you have already guessed this, but…I also taped another Quilting Arts Workshop!!!!! So the reason my suitcase was overstuffed is that I also had all the stepouts and finished projects for a whole ‘nother 70 minutes of taping!!

What was the Workshop on? Well, I’m going to keep that a secret until it comes out, but it’s something new I’ve been working on all Summer, I’m quite proud of what I put together! 🙂 Hah, please note that because we renovated our kitchen this Summer, I didn’t have that much time to actually prep for this workshop, (although there was plenty of time to THINK about it while painting, sanding, etc., and that thinking is actually tremendously important!) So this Sunday was a golden day, to lay out all the stepouts for the workshop on my bed and take the time to think through, and rehearse out loud, all the information I wanted to share during the filmingthe following day.

After a quick night’s sleep, I headed off bright and early for the studio. After a wrong turn and detour, I arrived, a bit frazzled but with plenty of time to spare at the studio Monday morning: 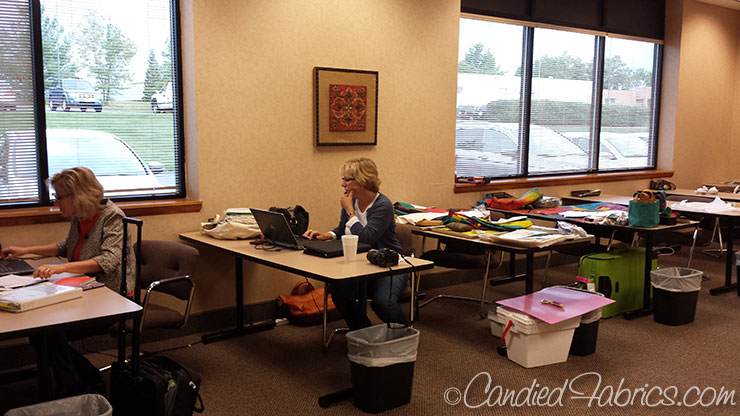 In the 2 years since I’ve filmed with Quilting Arts, their producer, Kathie Stull, has moved to a new production studio. The green room is no longer green, and it has windows!!! There’s Helen Gregory (Vice President of Content, Interweave and Martha Pullen at F+W Media, Inc.) and Vivika DeNegre (Editor of Quilting Arts) hard at work. (Please note: an editor’s work is NEVER done! These ladies worked constantly! They are both so suepr awesome!) 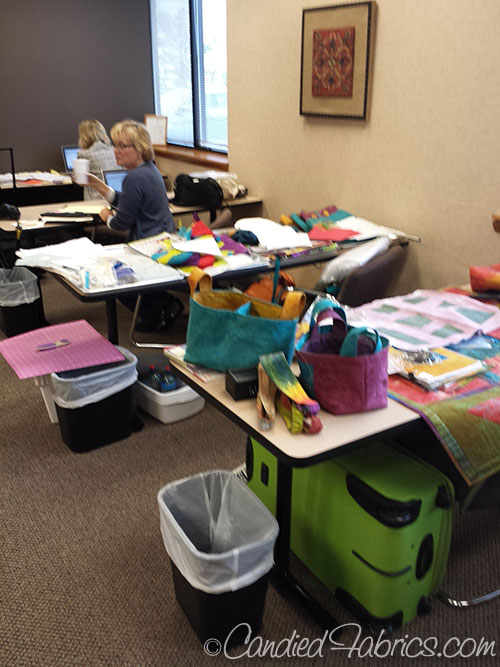 Each artist gets a table to get organized, a sheet tray for each segment or chapter of a workshop. I had 2, and really could have used another!

The wonderful Jeannie Cook-Delpit is on set the whole time with her Berninas, and she took a bunch of pictures of the monitor during my first segment of the day: 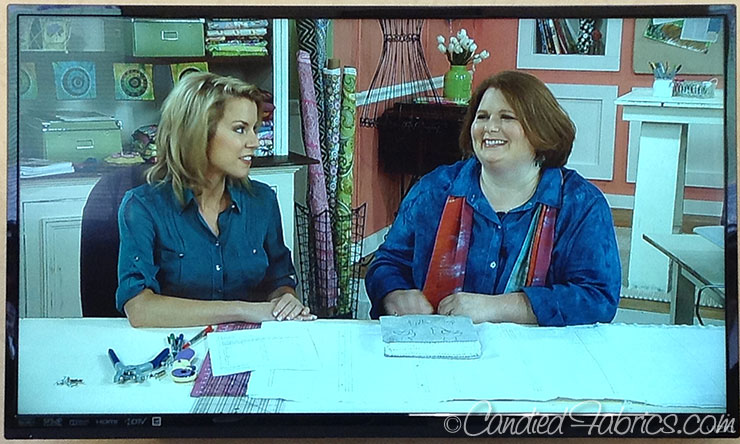 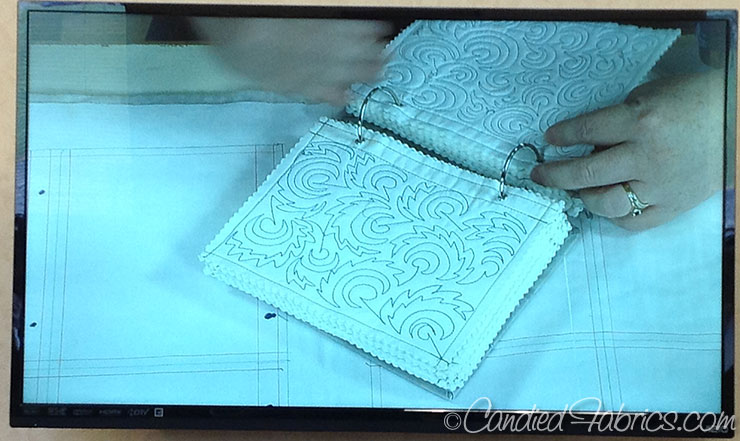 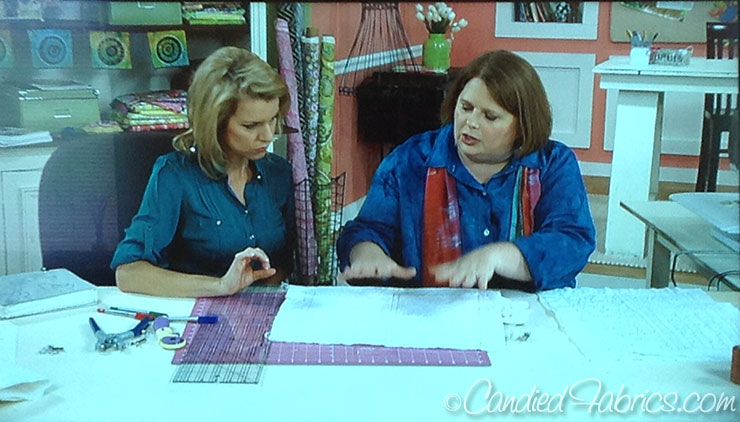 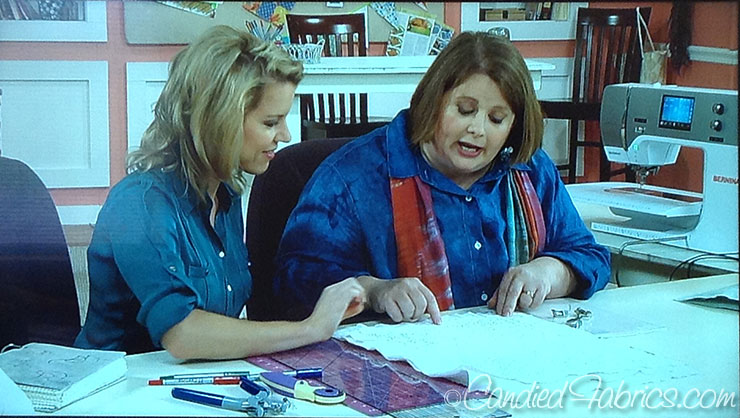 It looks like we’re having fun, doesn’t it? Well, we were! 🙂

Next up was my Christmas Stockings, the only pic I have of this is one Pokey Instagrammed right before we shot the segment: 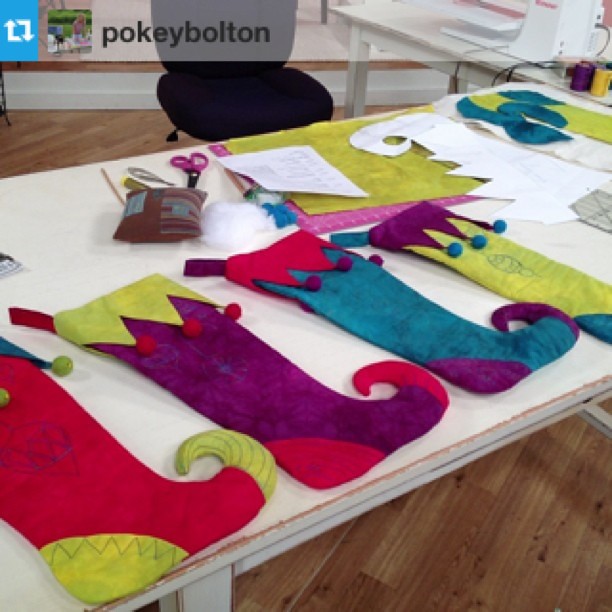 Then as soon as that segment was shot, I was outside dyeing while Ebony was taping her 2 episodes! I wanted to have a 1 hour and 2 hour after dyeing stepoutfor my “Faux Snow” dyeing segment, so I had to get that started before lunch: 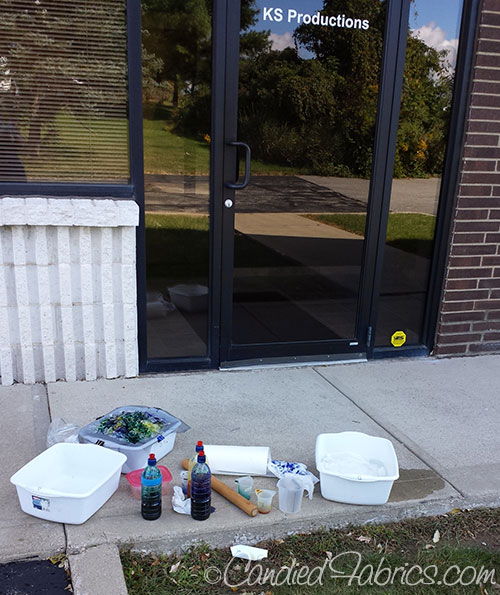 Pokey came out and snapped another shot for Instagram: 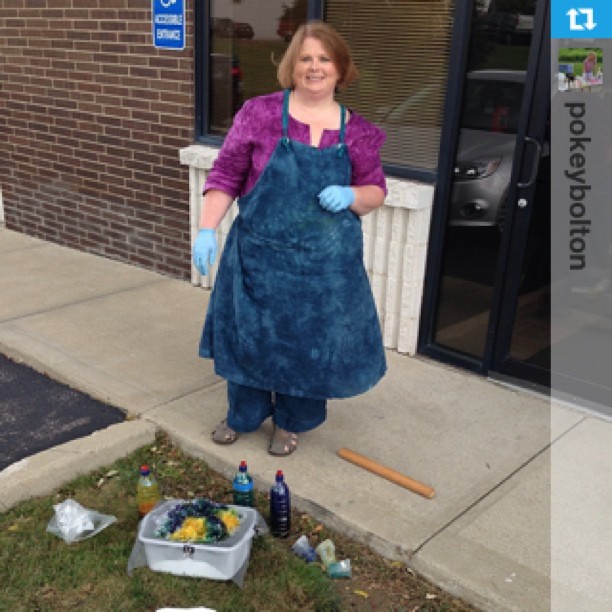 After dyeing the first stepout, I pulled off my glove and discovered a big purple splotch of dye on one of my fingers. I didn’t think THAT much about it til I showed Katherine, the producer’s assistant, whose eyes got reallllly big! (They have instructions on how to prep for being on camera, and there’s a LOT on how your hands are supposed to look – and nowhere on there is anything about have dye on your hands!) So, I scrubbed and scrubbed with a kitchen scrubbie and lots of soap, and lo and behold, I made it disappear! Phew!

After lunch, it was time for segment 3, the faux snow dyeing! I finally remembered to get a shot of the studio: 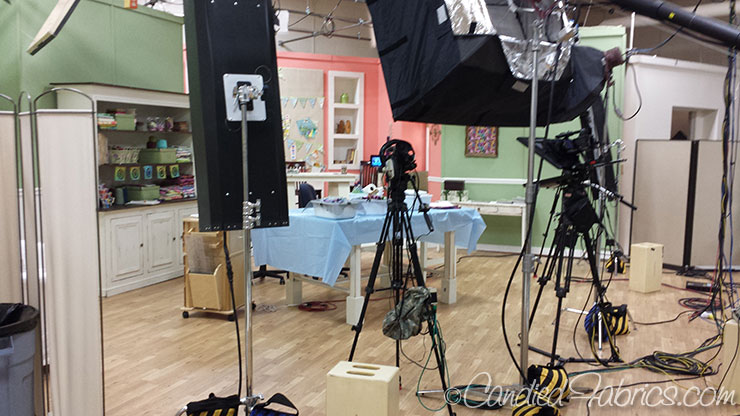 and here’s what it looks like from the other side! There’s Helen, being her awesome friendly, helpful self, with a photo bomb from one of the crew – they are all awesome! 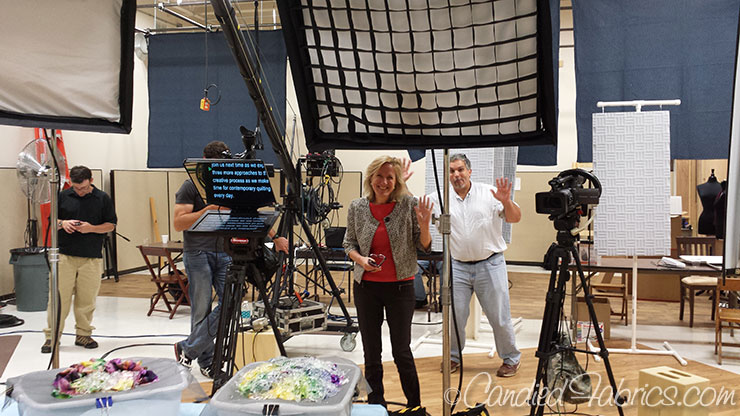 While Helen was snapping the before shooting pix, I remembered to hand her my cell phone for a quick pic. 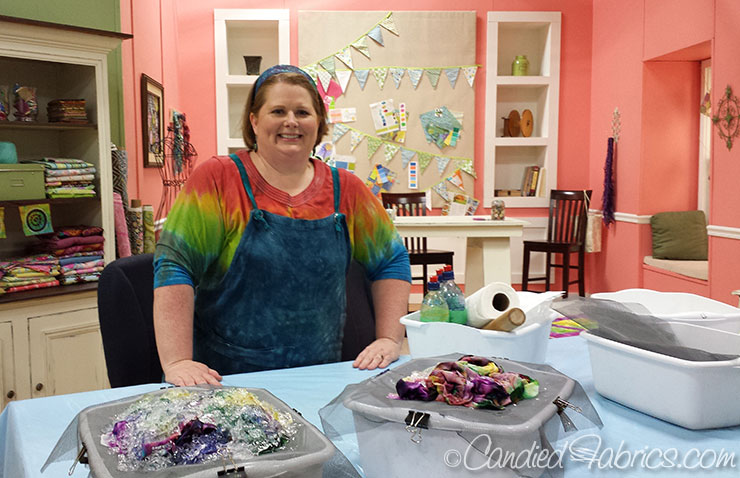 Ah, makeup! I never wear it, and with all the running around I did all day, I was always “glowing”! People were always blotting me, of course Pokey wanted to Instagram that as well: 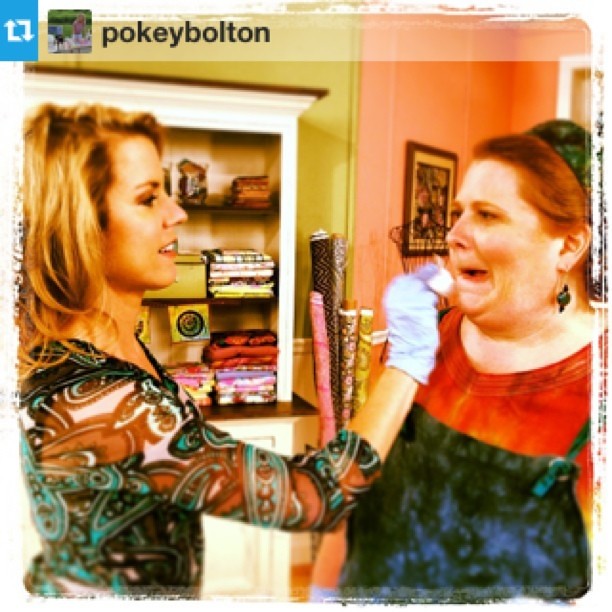 I’m so glad that moment was captured! 😉 Once that was over and all the dyeing fabric safely placed out back to batch, I had one more segment to shoot, my hanging organizers. Not a picture of that in sight!

Then, it’s time to get set up for my Workshop! I do a lot of stitching for this one, and the table they usually use on set shakes a bit when I get the sewing machine up to full speed, but they have a real sewing machine table as well (a Horn I believe) that they brought out – oh I was so excited about this! No more bouncing, and the table was a few inches lower so I didn’t have to sit on a pillow! Hooray!

Pokey stopped by on her way out of the studio to say good luck: 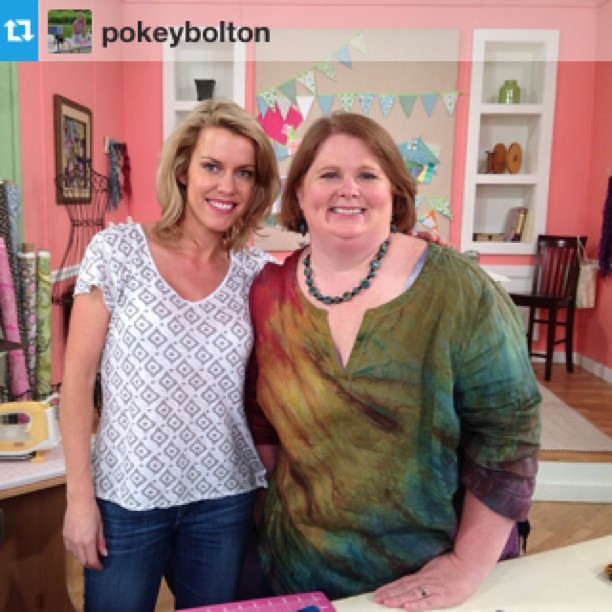 and I got down to business! Every chapter started with me talking it all through with Helen, Vivika and Kathie. We’d make sure that everything was in the right place, and then either Vivika or Helen would say “and what’s your closing line?” I would tell them, and then most often they’d ask me a question about how I could relate it to my viewer, and then I’d process that and come up with a better line, and then off I went. After a bit of hassle with the microphone in my ear, we were off! It seemed to go incredibly fast, and just before the closing chapter, I asked Helen whether we were going to shoot the additional promo stuff, and she showed me her cell phone: 5:44! Wowza, that afternoon flew by!!!!

Although most of it was a blur, I do remember being able to look at the camera (for the most part) and talk to the people in the future who will be watching it, that made me quite happy. I also know that I ended each chapter thinking that I’d remembered what we’d talked about and incoroporated it…those few seconds of conversation before each chapter made such a difference!

Here’s one pic, taken by the most awesome Ebony Love  in the “green room” during filming. There’s a bunch more, but I’m going to save them until the workshop is ready! 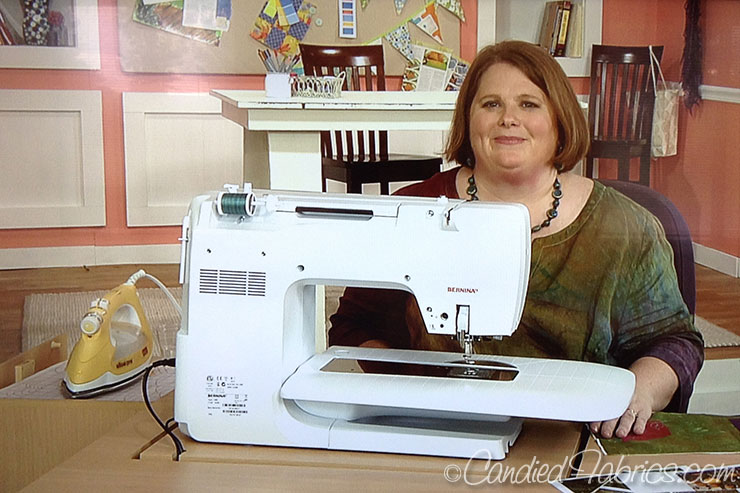 Phew! What an exhilirating, exhausting day! After  wrapped up filming, I threw everything into my suitcase (except all the dyeing stuff), and Diane Doran and I went out to dinner; I’d met her last time I was filming, and she was in town to film a couple of QATV episodes and a workshop the next day. We’d just ordered our appetizer when in walked Vivika, so we had a lovely dinner!

Back in my hotel, I rinsed all the dyed fabric – that awesome sink made this easy. And before I crawled my way into bed, I hung all the fabric up in the bathroom to dry: 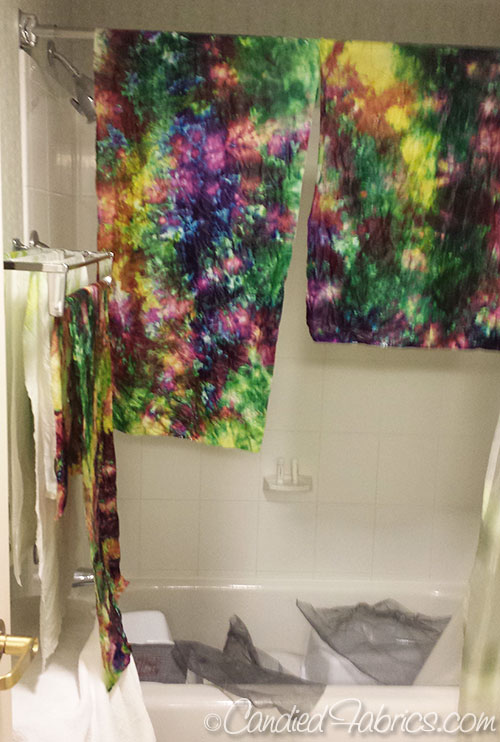 Phew! What a fantabulous day!