I have not accomplished much on this month’s goals yet:

Instead, I’ve got a re-decorating bee in my bonnet! My living room color scheme has been built around my hubby’s chair: 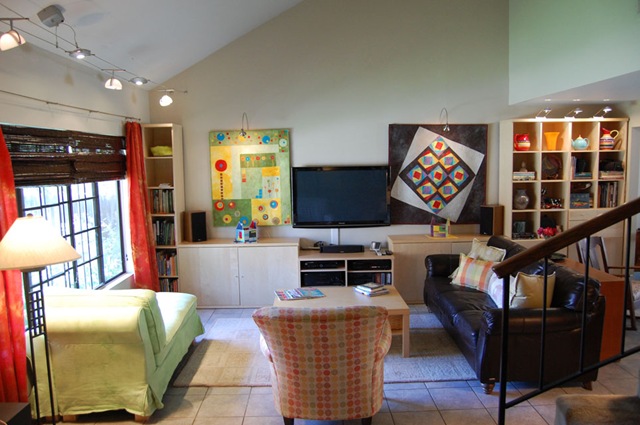 since we moved here over 8 years ago. I’ve been wanting to change it for a good year or two, as his beloved chair is getting very worn on the arms, but I haven’t had any strong feelings about which way I want to go with the colors, and since I’m going to be making the slipcover for the chair, I want to really love where I’m going with a new set of colors because making a slipcover is a Pain In The A$$! 🙂

I’ve also been wanting to buy and dye another slipcover for my Ikea chaise lounge: 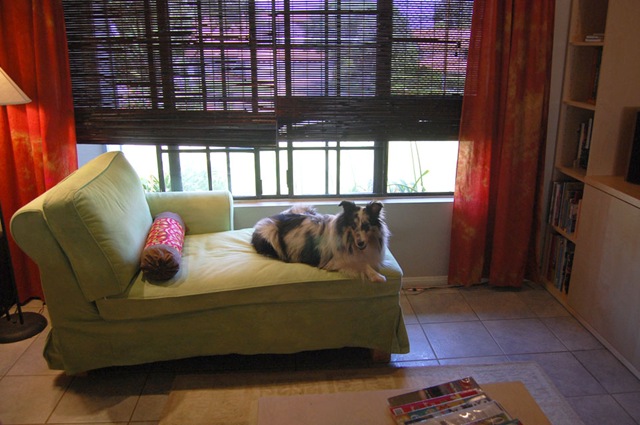 because it’s Stirling’s favorite spot, so it tends to get dirty (I leave the blinds open on the bottom when we’re gone so he can sit there and watch the world go by). Because it IS a slipcover, it’s relatively easy to take off and wash, but because it’s from Ikea, the parts of the slipcover that don’t show are made from some really cheap fabric that gets stuck to the velcro whenever it is washed, this fabric is just about gone, so the next time I was the slipcover I wouldn’t be able to zip it back on.

Anyway, I’m loving my Autumn Splendor palette, and so decided that I needed to have the living room re-decorated for Thanksgiving. So, with all the running around I’ve been doing, I’ve been squeezing some dyeing in here and there, the curtains I dyed are done, I’ve got gold canvas dyed and ready for making the armchair slipcover this weekend, and the new chaise slipcover is in the washing machine as I write this! (Ugh – that’s been stressful! Ikea no longer makes this chaise with the arm, so I couldn’t buy a new white slipcover. 🙁 I found a tan cotton one on Ebay, and really fretted about how I could overdye that color to make it work with the Autumn Spendor colors. Fingers crossed, I think I did okay).

Part of me thinks I’m crazy for doing this now, but the other part of me could not let the idea go, and so I am just giving in to my need for new colors in the Living Room!