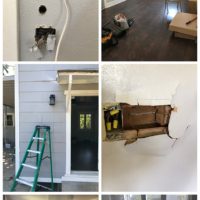 My electrician and his helpers have spent about 2 weeks replacing all sorts of wiring that was wrong, or old, and adding new can lights in rooms that didn’t have them (living room and bedrooms). It’s been extremely stressful because he’s had to cut holes in the walls to access things – 20 in all. And he doesn’t patch them, so that’s something I’ll have to tackle. The other stressful thing is that the house now looks like a WRECK! Sometimes there are tools everywhere, and there is lots and lots of dust and dirt everywhere as well. In the end I’ll be so glad it’s done, there were some unsafe wiring conditions, including old “knob and tube” wiring and lots of ungrounded receptacles. He also put my studio on its own circuit so that my iron won’t ever blow a breaker! Here’s some of the chaos: