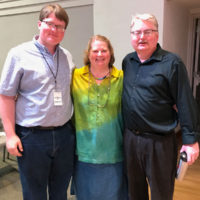 I knew it was gonna be crazy, but I had no idea how much! Hubby (and his amazing team) has been working on arranging and hosting the International Trombone Associations 2017 festival for 2 years, and last week was the time!!!! So many amazing performances played by many of the very top trombone players in the world! There were over 800 trombonists on the campus of the University of Redlands, along with 80 Jr. ITA camp members as well! These numbers are huge compared to the recent US events. For four days there were often 5 different performances, master classes or lectures going on at the very same time – Andrew promised people a five ring circus, and boy did they deliver!!!

Even before the event actually started on Wednesday, June 28th, people were arriving on campus for rehearsing. Andrew and I hosted a small dinner party for a group called Pandora’s box on Monday night. These three amazing musicians were wonderful company, it was wonderful to be able to enjoy a few hours of good food and great conversation! Not a single picture was taken as I was flat out baking, cooking and prepping until moments before they arrived (Andrew played a piece with John Kenny during the festival and had to rehearse, and generally be crazy busy all that day. Until he came home an hour before they were to arrive and made some amazing avocado mousse.)

The next day I spent baking, prepping and cleaning for a crowd – Andrew invited a lot of people who had arrived over to the house, I’m sure there were over 50 people at one point, it was quite a blur. However, I did get to have some nice visits with some lovely people, most especially Stuart Dempster and his wife, who were very interested in my art hanging around the house, we spent a delightful 10 minutes as I answered question after question, and saw them understand the directions I was taking in my work. It was awesome! People stayed until 11 or so, and then there was a fair bit of cleanup, so we started the actual festival sleep deprived and continue in that vein for the entire week. Hubby had a zillion things to keep in his head, and was answering emails and texts literally constantly. I was able to focus my stress on worrying about Liam’s performance in the upcoming competition, whether Andrew would have the time and head space to properly warm up and stay limber for his performances he had, and then there was the fact that I was playing our Gunther Schuller duet as well! That was my stress! 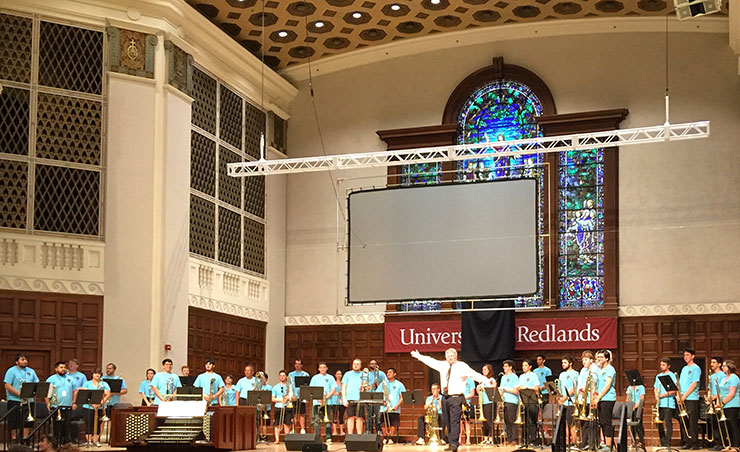 During the opening ceremony Andrew conducted a large trombone choir he put together with college trombone players who either live or go to college in California. For a group that only rehearsed together 3 times, they sounded amazing! (Liam’s in the back row on the left.)

Liam had an AMAZING experience during this festival. He’s in Colorado doing the Aspen Music Festival for 8 weeks this summer, he actually had to apply for a leave so he could perform and compete this week. His teacher at Aspen is Per Brevig (principal of the Metropolitan Opera for years and years, Andrew studied with him for a couple of undergrad years at Oberlin) who had several activites at the ITF as well, so luckily Liam’s leave was approved! 😉 The first day, after playing in the opening ceremony, Liam assisted Per in his class about musicality – playing examples Per wanted to illustrate, and being coached by Per in front of a room ful of people; sort of a masterclass except Liam was playing what Per wanted him to play to help him illustrate his points. Obviously, this could have been a stressful situation but Liam handled it wonderfully! 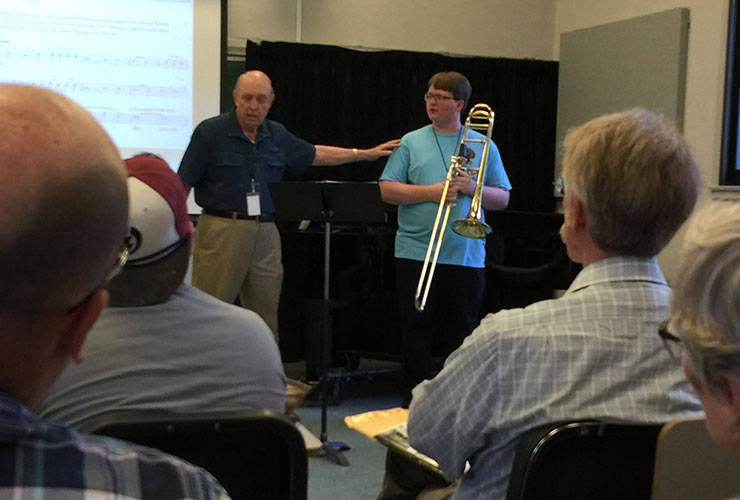 Then, he had a rehearsal and then performed with the Vanderbilt Trombone choir for a half hour prelude to Ian Bousfield’s recital, they also accompanied Ian on one of the pieces: 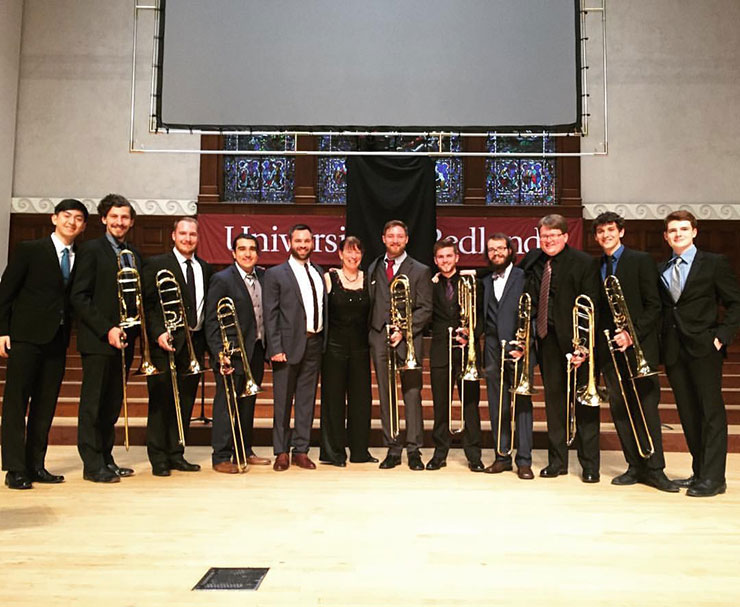 The next morning was the Wiehe competition. Liam did a GREAT job! He played with musicality and conviction, and it was the best I’d heard him play the piece, so this competition was a great success! The other 2 competitors played with completely different interpretations and ultimately they chose the player who played cleanly but with less musicality and feeling… But again, we all felt that he had played his best, and that’s all you can want from a competition setting! (Sure, you want to win, and the prize for this was a $1000 gift card to a brass shop, but at this level it’s down to tastes and preferences, so there you go!) Here he is just after with his Vanderbuilt teacher Jeremy Wilson and a couple of the Vanderbilt trombone studio dudes: 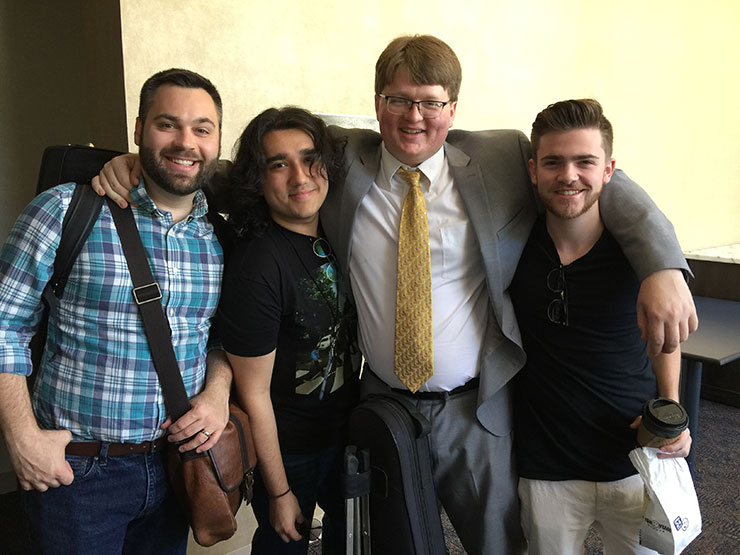 and then with Per Brevig: 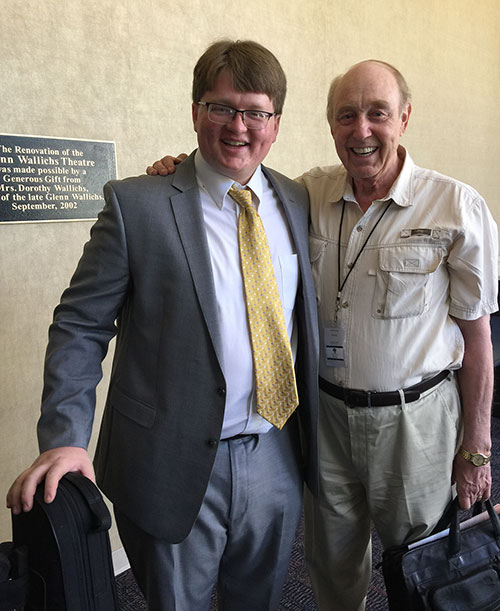 and all 3 competitors at the award ceremony that evening: 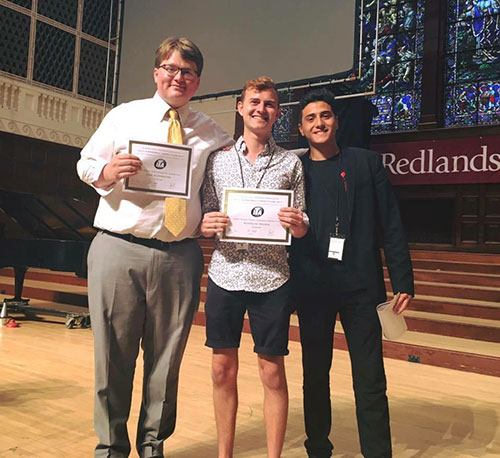 It was truly awesome to have all these wonderful people routing for Liam! Andrew’s sister and brother-in-law came down from SPokane for the week, so they were there too. Plus Liam’s elementary school band and jazz trombone teacher were there as well. I’m sorry I didn’t have time for more pictures at that event, but we all had to immediately attend the Stuart Dempster Retrospective recital that Andrew played in:

And then on to other events of the day, including Tim Higgin’s recital at 1 and then Jeremy Wilson’s at 8! Liam again assisted Per in another class, this time the student composers who had been working all with with Erik Ewaisen, a Juilliard composer who writes a lot of trombone music, and had a couple of pieces premiered during this week. Per talked about all the different ways a trombone can be played to these composers, and he had Liam with him to play these examples for the composers, it looks like they had a great time: 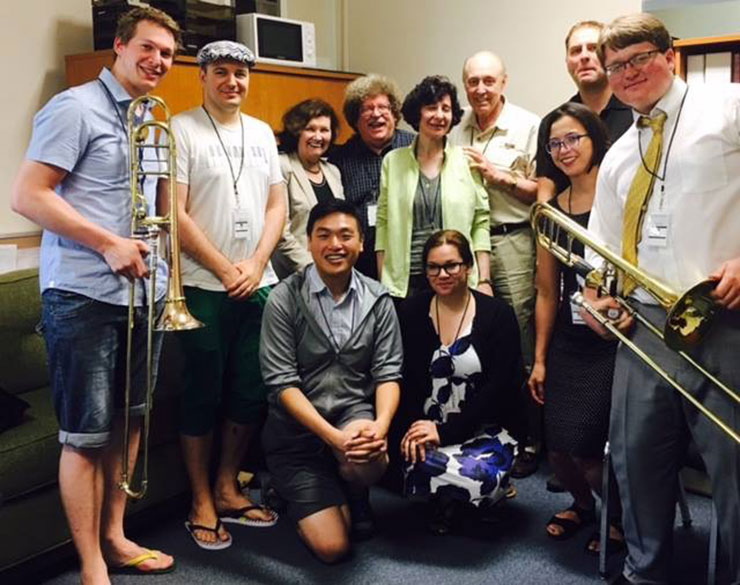 Tony Suter, the composer here at Redlands, is behind Liam in the picture above. He too got to work with the composers and had a piece premiered as well. Erik Ewaisen is in the center with all that curly hair (yes, he reminds me of Gene Shalit!), he has the most infectious smile and was omnipresent all week smiling a mile a minute.

On Friday, Andrew and I played the Gunther Schuller piece that was commissioned by his sister and brother-in-law Shaun. Here we are setting up: 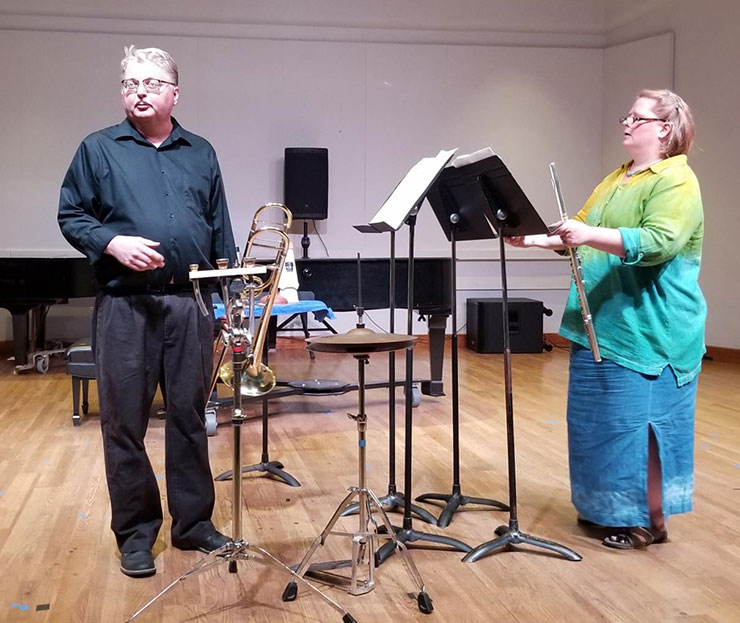 We played quite well, and in all the hubbub after the performance neglected to take any pictures, but after then next stupdendous concert (the John Kenny cycle #2) Erik insisted upon these pictures: 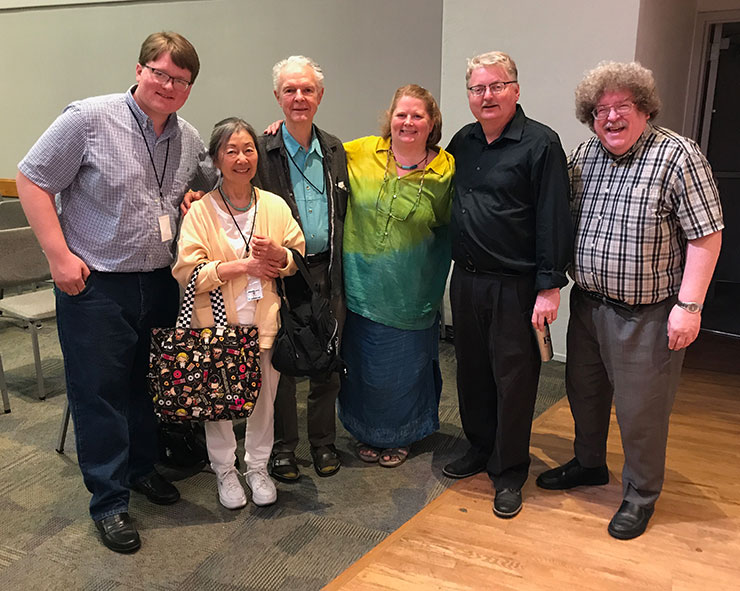 That’s Stuart Dempster and his wife Renko between Liam and myself, and then Erik Ewaisen on the right side. 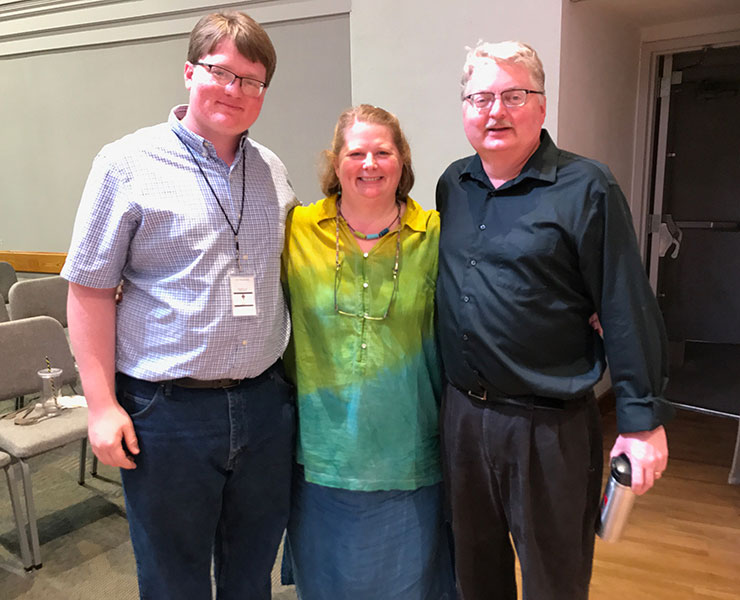 Erik posted this picture on facebook and said “A truly delightful and wonderful family of extraordinary musicians” – wow,l! Hopefully we’ve planted the idea of flute and trombone duet in his head!

In between all of this, Andrew’s publisher was publicizing his new book: 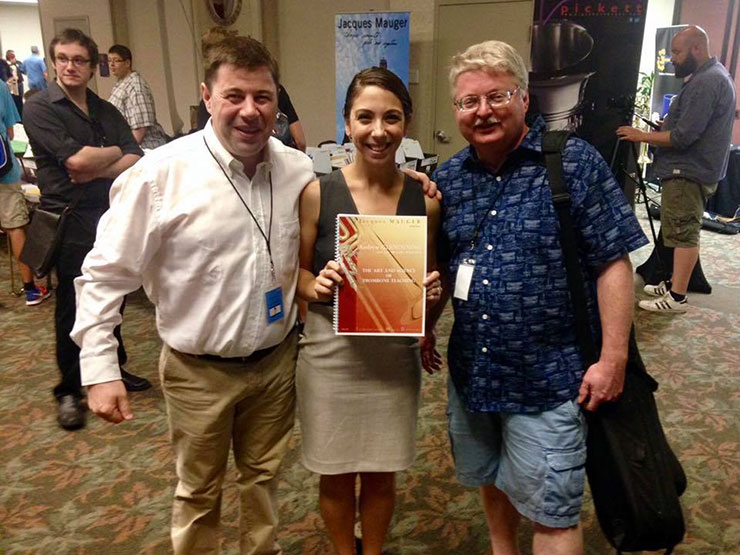 Both Jacques (the publisher) and Andrew were happy with all the initial buzz the book was creating!

There were 2 blockbuster final concerts. The first one featured 4 trombone concertos at the Redlands Bowl, followed by all four soloists playing an arrangement of “76 Trombones” accompanied by 101 trombones (all of hte college choirs who performed during the week), making it a total of 105 trombones!!! It was awesome!!!!! 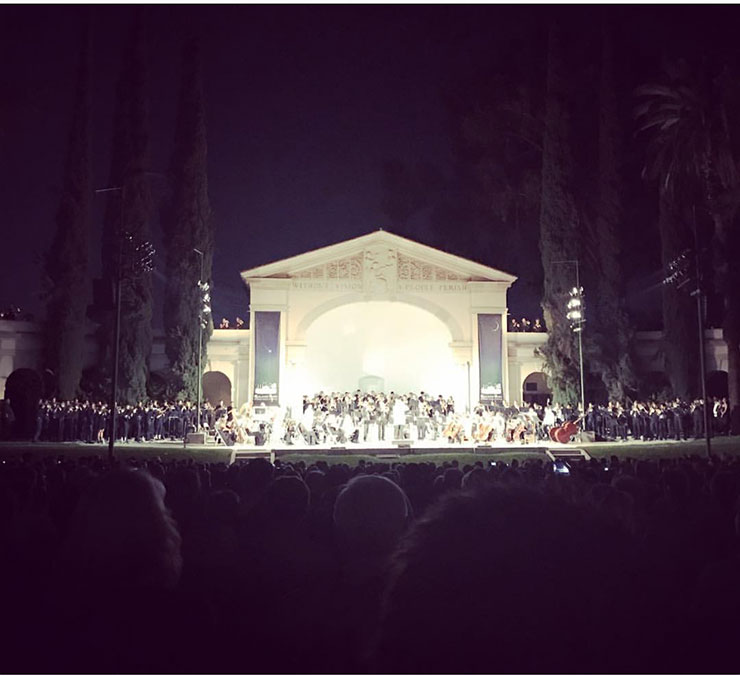 Saturday during the day I had a tie dye day with Jeremy Wilson’s wife and three kids, along with Ian Bousfield’s wife and two kids. Kristi was able to snap a couple pix of her crew (the baby hung out without too much complaining in a covered playpen: 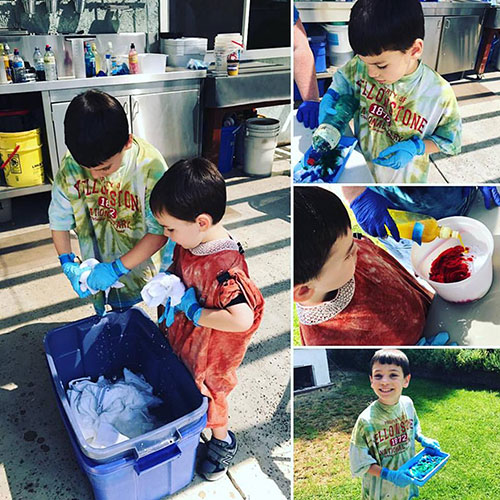 Then Saturday night the very final concert was in the chapel, here’s Andrew and his team receiving the “thanks for doing this massive undertaking” award. I’m sure it has another name, LOL, but he made sure to point out how much teamwork it took to pull this thing off! 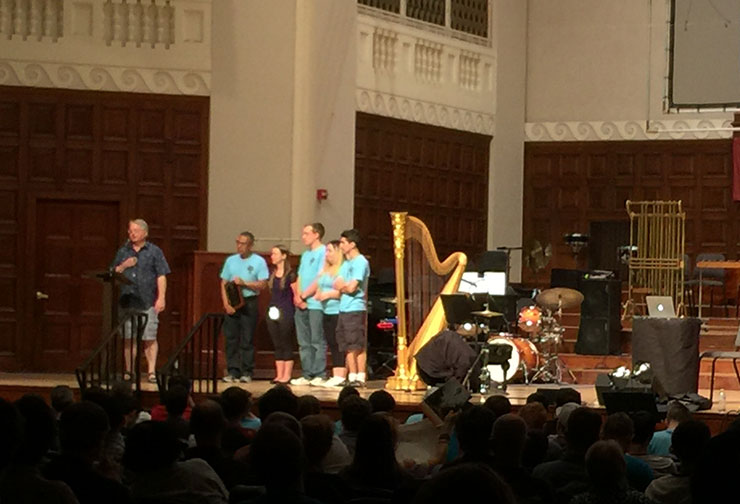 The concert was quite long, and ended with a premiere of a trombone concerto written for Ian Bousfield by his friend, the video game composer Grant Kirkhope. APparently, Grant is THE video game composer, and so Logan, who has been surrounded with famous low brass players for years, was FINALLY impressed, and was psyched to meet him! 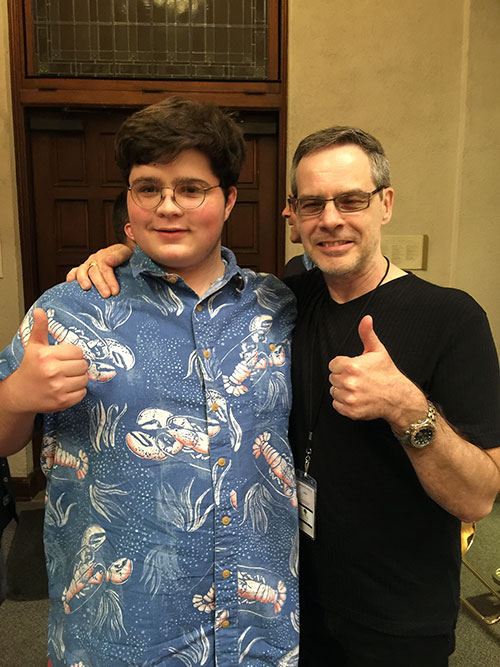 My goodness, what a week it was. And there’s no rest for the wicked, we had one day of downtime before the 10th annual Pokorny Low Brass seminar began. That’s been running all week, and is over tomorrow. We’ll host a couple of farewell, final dinners for the faculty on Saturday night and Andrew’s students Sunday afternoon and then sleep for a week!!!!

I’ve got a couple of finished projects I’ve been anxious to show here – fingers crossed I can resume a semi-regular blogging schedule soon!

← An Amazing 25 Years!
Another Milestone for Logan! →