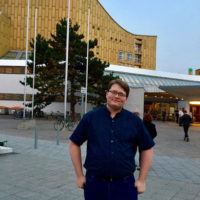 It’s been a week since he’s been back and I’m finally getting around to gathering up pictures so I could share a bit about Liam’s experience at the Aeolus Competition. He learned about this competition, which takes place in Dusseldorf, Germany, in the summer  of 2015. In order to be considered, you have to have learned and be prepared to play 6 specific pieces that the judges choose. There are 3 rounds before the finals, and each year they feature 3 different instruments, this year it was Trumpet, Tenor Trombone and Tuba. The age limit is 29 years old, so most of the folks who compete are grad students or beyond, but Liam was really taken by both the idea of this competition and the fact that one of the judges this time is Christian Lindberg, pretty much the world’s most famous trombonist! He learned all the pieces during is Freshman year at Vanderbilt, on top of other pieces that he needed to learn, and was ready to submit his application last May. We are so VERY lucky that Liam’s trombone professor Jeremy Wilson was able to accompany Liam on his trip to Germany, he even brought along his 7 year old son Eli!

They arrived in Dusseldorf on Sunday the 11th, and spent the day wandering around Dusseldorf trying to stay awake! Here’s one of very few pictures Liam posed for during the entire trip, in front of the Rhine river: 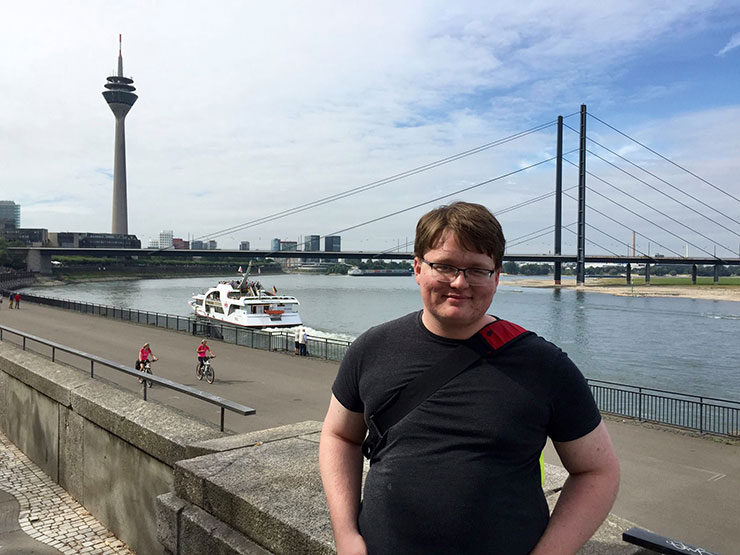 Monday was registration, rehearsal with the accompanist and an opening ceremony of sorts. There were 38 trombonists, most of them FAR older than Liam, and they didn’t meet a single American trombone player. There may have been one or two, but not that they could tell. The first round of the competition was Tuesday, with each trombonist playing for 15 min they didn’t get through all of them, Liam played Wednesday morning. As far as the competition goes, I’ll use his teacher Jeremy’s words that he posted on facebook to describe Liam’s performance:

I’ve been in Germany this week with my student Liam, who has been competing in the Aeolus International Competition for Wind Instruments. Liam was one of the youngest competitors (and one of the only non-Europeans) and he performed well in the first round on Tuesday. Though he did not advance to the next round, I’m really proud of his performance for many reasons. He made music, took good risks for the sake of communication, and he connected with the sizable audience that was present. He stood 15 feet from a distinguished panel of judges (including his long-time idol, Christian Lindberg) and represented himself, his teachers, and the Blair School really well. This year-long process has been immensely educational for Liam and for me as well. I can’t wait to share what we’ve learned with the rest of the Vanderbilt Trombone Studio. Congrats, Liam! We’re all proud of you!!

Here’s a picture Jeremy took during the performance: 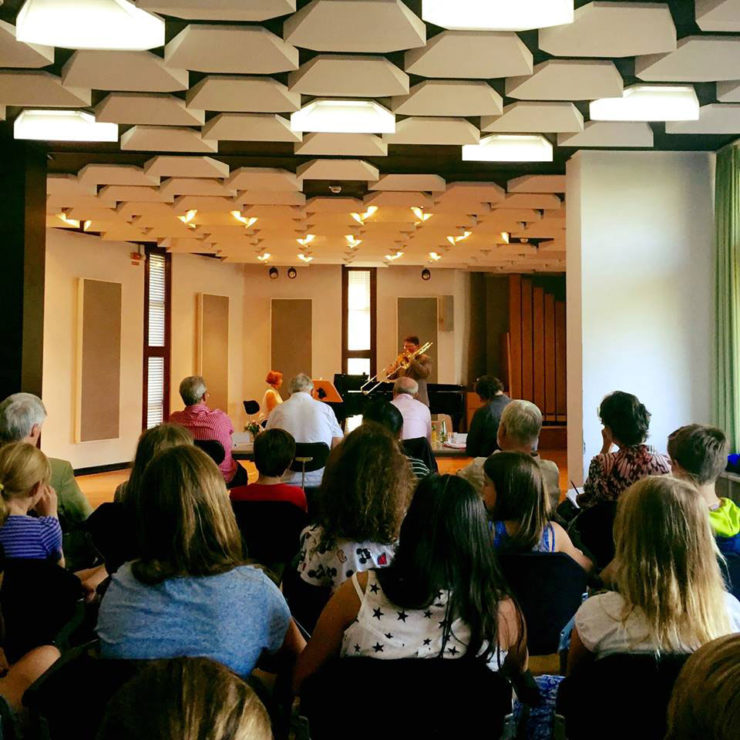 Seven trombonists advanced to the second round, and Liam and Jeremy were able to listen to all of them. They both had a clear favorite named Louise Pollock, a 28 year old from Sweden who has been First Trombone in the Gothenburg Opera since 2015. She ended up winning the whole competition (including a 10,000 Euro prize!), which made them both happy because she was great! Two of the other folks in the second round were also very very good, and the other four were playing at Liam’s level, so he felt happy that he was definitely “in the pack”, and he may do this competition again. He got to meet and hear trombonists around the world, and perform in front of Christian Lindberg. He even got to talk to Christian for a couple minutes, where he first told Liam that he played very musically and enjoyed the performance (hooray!) and then pointed out the little out of tune notes or other misses that Liam made, because on this level, everything has to be PERFECT!

Once the stress of performing was out of the way, they were able to make a quick trip to Cologne for lunch and a chance to see the Cologne Cathedral, what incredible detail!!!! 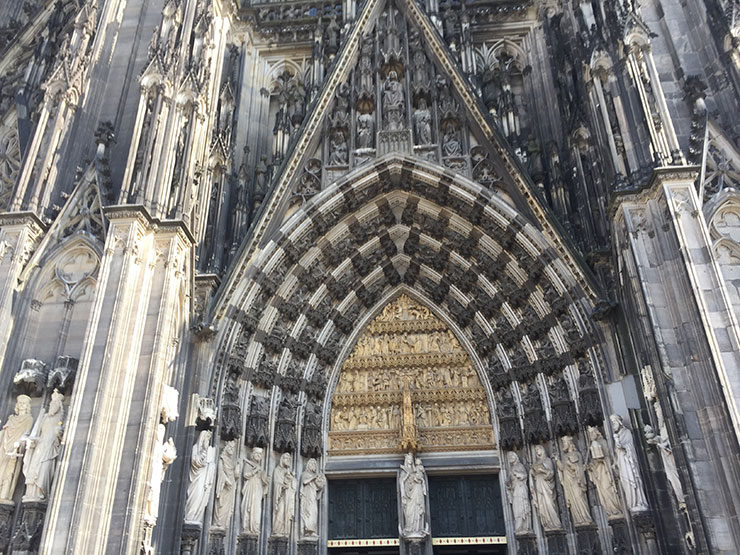 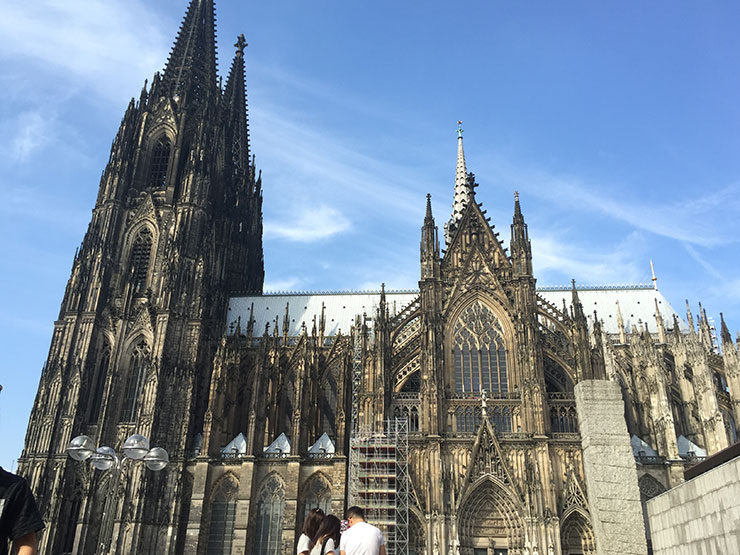 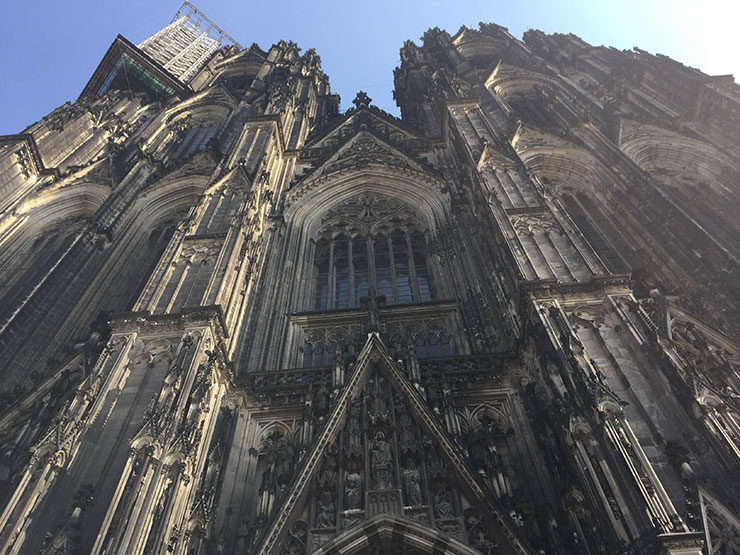 They also took a trip to Berlin and saw: 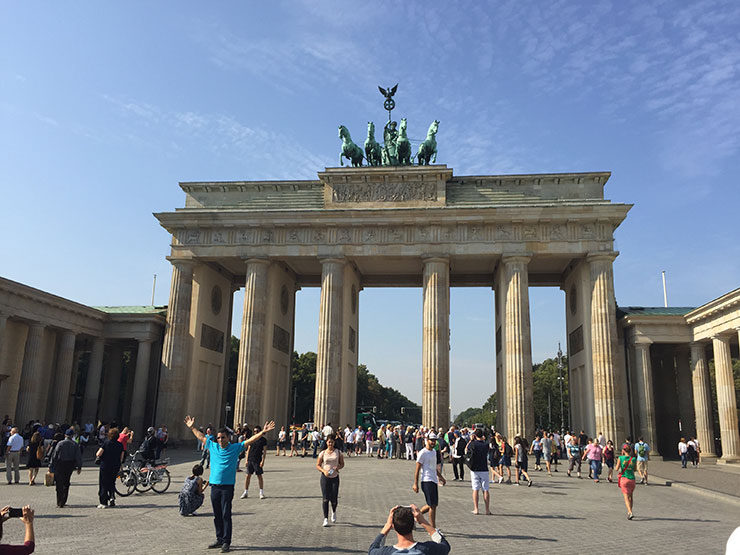 And probably the thing that excited Liam the most was a Berlin Philharmonic concert! 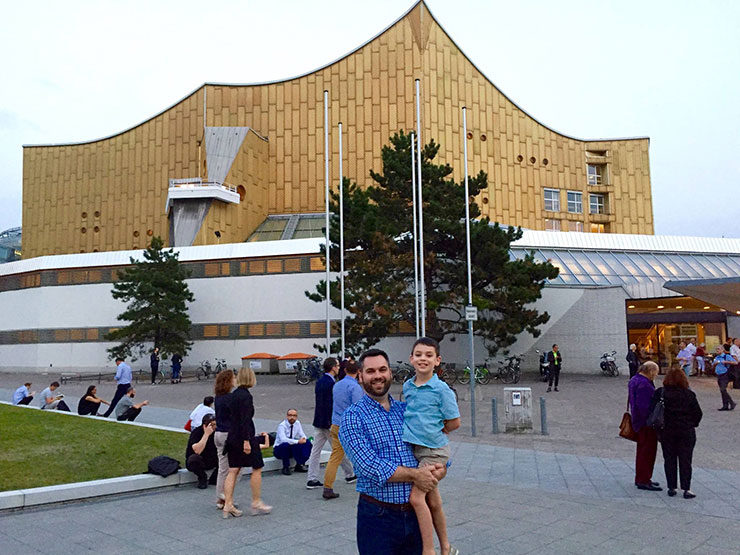 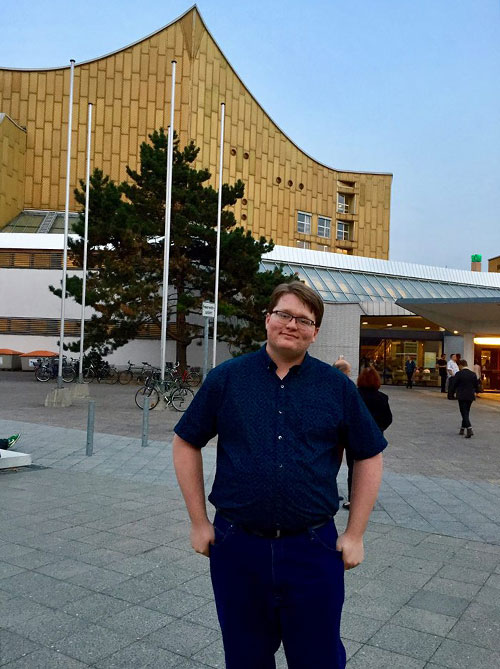 Jeremy and Eli sat towards the back, in case Eli needed a break from John Adams’ minimalist music: 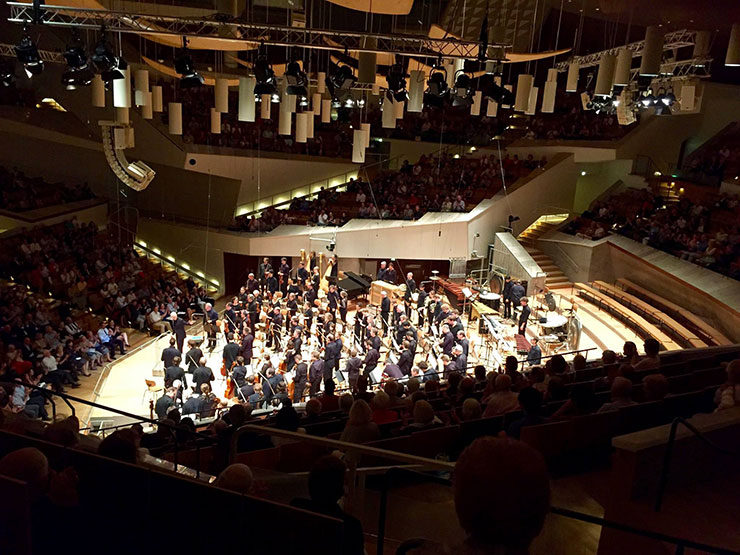 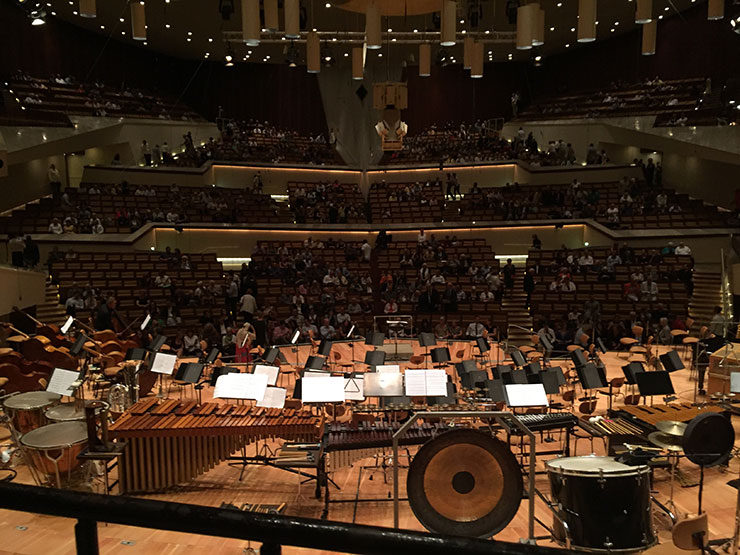 As soon as the final winner’s concert was over, Jeremy and Eli took off to Vienna to spend a few days there; it’s where Eli was born because Jeremy played in the Vienna Phil for 5 years before beginning his teaching at Vanderbilt. Liam was able to see an opera at the Dusseldorf opera house his final night: 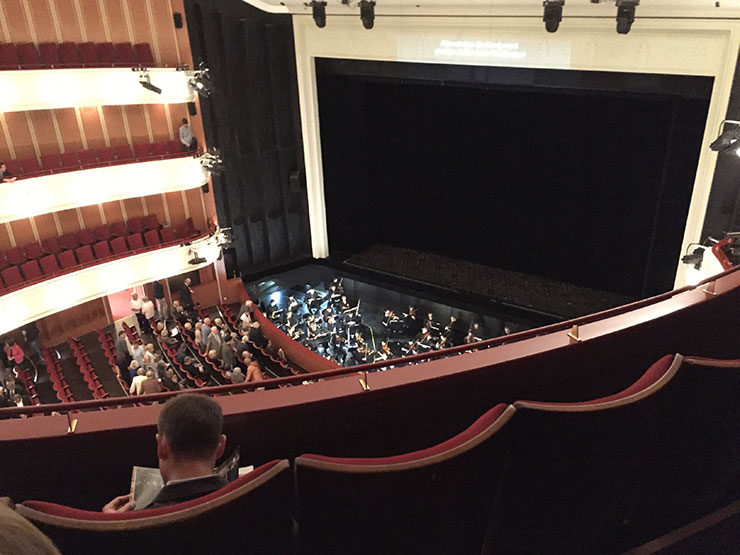 It was Bizet’s Carmen. He enjoyed it but wished he’d looked up the plot ahead of time because the subtitles and program were in German, so he had no idea what was going on!

Of course, he had plenty of good food too! 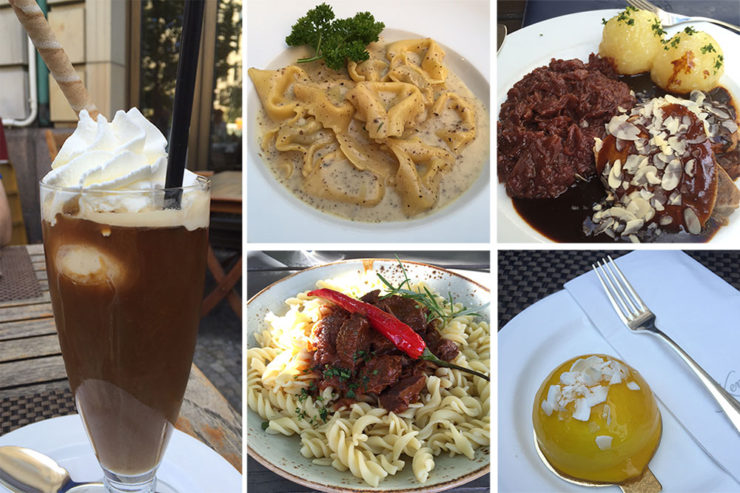 His Dad and I are so proud of all the work he did to get to this point, and know that this was a great piece of his education. Also, because this was pretty early in the Vanderbilt semester, he’s been able to get back in the swing of things in all his classes too, phew! Onward!