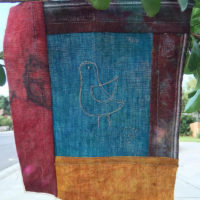 While working with linen lately, like for my leather handled linen totes, I work with fabric that I’ve dyed specifically for that project, so there’s not a lot of leftover fabric, but there are some choice small bits that I’ve been saving. While putting them away, I’ve been thinking about how to piece them together into something that wouldn’t be as heavy as a quilt, something that had more flow and really let the linen texture shine. I let that ruminate in my subconscious for a days, and then over the weekend the thought of Bojagi/Pojagi came up to the surface. This is a Korean patchwork cloth made from scraps and used to wrap other things with, the seams are enclosed so that both sides are “finished”. I remember that Victoria Gertenbach did some of this type of work a few years ago and has a great tutorial for a machine stitching version on her blog The Silly Boodilly, so I decided to give it a try. Of course, I would want to add some of my Free Motion Machine Stitching to the fabric and was worried that a single layer of linen alone wouldn’t have enough body for the stitching, so I grabbed a scrap of linen and sprayed a bunch of sizing on it, pressed it with a hot iron and stitched a little bird on it. Although it was a littly wonky after the stitching, another round of pressing took it out again, and it became the center of a Pojagi experiment: 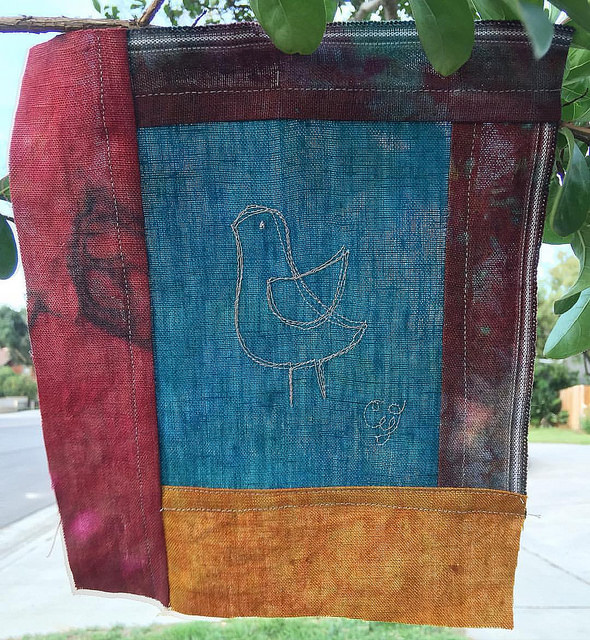 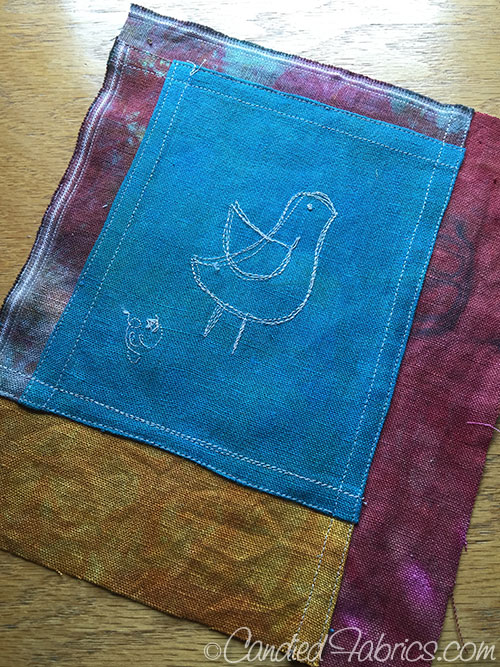 Part of the beauty of Pojagi is that you can see through the fabric and the seams become a part of the composition. The linen I use is pretty heavy duty, but there still is some light penetration. I can see that if I want to emphasize this part of Pojagi, I’ve got to find some new places to photograph, but this tree branch in my front yard did in a pinch.

Working with linen can be fiddly, as it likes to shift all over the place, so I usually back it with a layer of SF101 mid-weight fusible interfacing, so to work in this way I’ll have to be 1) generous with the sizing and 2) ready to accept wonkiness in the seams. But I think that I like where this is going!

← May Goals Check in
Upcoming Classes at the Redlands Sewing Center →