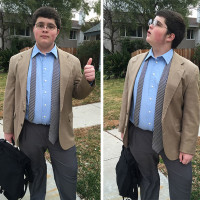 I’ve got this app on my phone called Timehop that shows me posts from social media I made on that day in years past, it’s pretty cool! This month it’s been reminding me about all the college auditions and honor groups Liam was doing last year – there was a LOT of things going on! It made me realize that I hadn’t written about either of my boys in awhile, so I thought I’d share a quick update.

Logan is a freshman in high school now, searching for his passion. He is doing Speech and Debate this year, and some of it he excels at. The prepping beforehand and taking constructive criticism from his teammates and coaches is NOT his strong suit, and I’m hoping that he learns how to deal with this part of it so he can continue on with the extemperaneous event that he loves. Here he is all duded up for his latest meet: 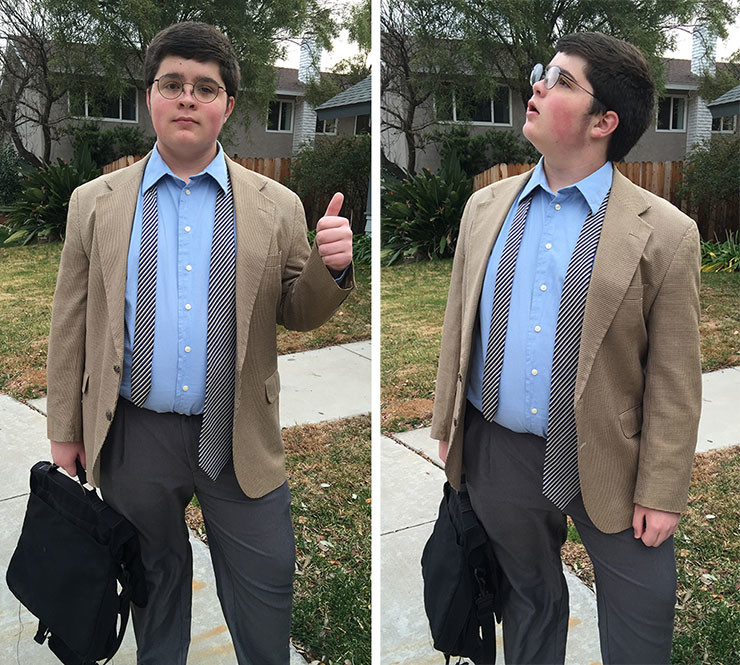 One hilarious thing is how much he enjoys getting dressed up for these meets! He usually doesn’t care at all about what he wears, so I love that he loves to rummage through his Dad’s ties and jackets to find just the right wacky, yet meeting the requirements of the rules! And yes, those are sideburns! He’s growing them just to annoy me! 😉

Music wise, he still plays cello in the school orchestra, but mostly because we’ve told him that he needs to be in a during school music group in order to audition for Jazz Band, which is a second semester, after school event at RHS. He really likes playing bass guitar, but hasn’t been in a group since he graduated from middle school. He auditioned for the high school group and HOORAY, got in! Hopefully this will help motivate him to keep going with the guitar! As a second brother to Liam, he adamantly does NOT want to pursue classical music in anyway, and was quite excited that he got into Jazz Band as a freshman, something Liam didn’t achieve. (Of course, it helps that Logan was the only kid who auditioned….LOL!)

Liam’s had an awesome freshman year at Vanderbilt, with much less transition issues than I think a lot of freshmen have. He’s played in the Friday student recital several times already, and is planning a recital for April, something most freshmen in music schools don’t do. He also was a finalist in the concerto competition at school just last week. He even included me in the discussion of what to wear! 😉 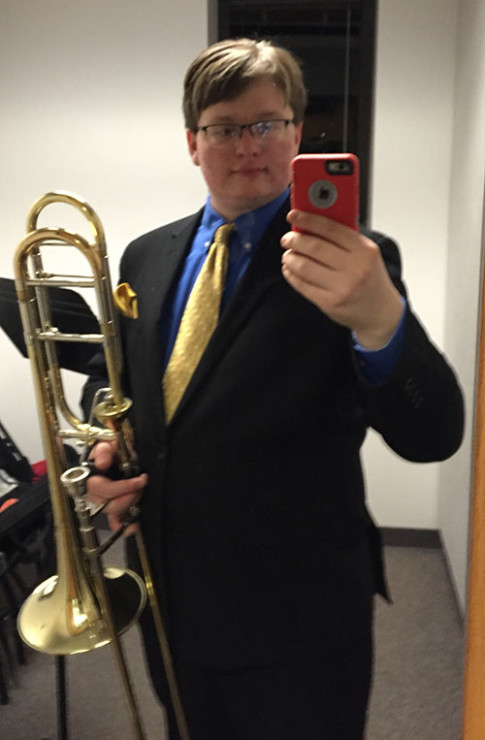 He didn’t win and was totally fine with that – in fact he and his teacher are a bit relieved because it means he can work on more pieces, rather than continuing to refine this concerto for several months before performing it. Most importantly, he loves performing, and loves learning new pieces!

So my little boys aren’t so little any more!!! Although quite stressful at times, watching them grow up into young men is a joy!

← Testing the New Neutral Grey Dye Part 2
5 | The Background of My Scrappy Swiss Cross Quilt is Gonna Be Scrappy!! →

One Response to One Moment | My Growing Boys