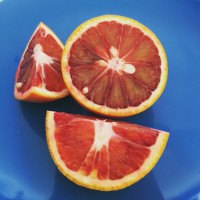 I declare this the year of no big posts reflecting back on the year that was and another big post of what my word of the year and what my big goals are! Frankly, the thought of creating those posts just wears me the heck and has been holding me back from blogging in the spare bits of time that I’ve had, so I release myself from this burden!!!

Well, I can share my #2015bestnineinstagram posts because this collage was super easy to generate: 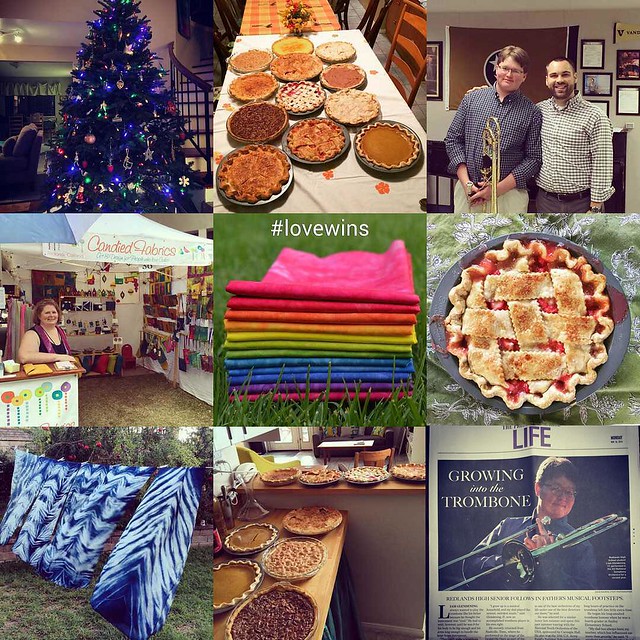 And it does sum up a big part of the year! Liam having great experiences and starting life as a college student at Vanderbilt was a big part of last year (there he is with his new teacher Jeremy Wilson in the upper right).  I posted a lot from each of the few shows that i did this year, the picture of me in front of my booth got a ton of likes – I guess it’s true what they say that pictures with people in them get more likes! ALSO! Pictures with PIE in them get lots of likes too! 😉 This also was the year that I found my groove with indigo dyeing!

After Mom and David returned from visiting my Step-sister, we spent a day in LA visiting the Broad Museum:

Took these folks to @thebroadmuseum today!

Look at the huge table and chairs by Robert Therrien!

Huge table and chairs! Totally forget the name of the artist at @thebroadmuseum!

It had rained a lot the previous 2 days, but it was beautifully sunny this day!

We had beautiful sunny cool weather, in between all the reason this week!

We had a great lunch at the Blue Cow Kitchen, we sent Celia off to the second of her five college auditions all fuelled up and ready to go!

Then deeelicious food at #bluecowkitchen…@celialto_6 needed extra protein for her BU audition!

Then I had 2 days of EARLY MORNING airport runs, Mom and David needed to get to the Long Beach airport yesterday really early – a 90 minute drive, but such a cute little airport without all the stressful traffic that surrounds LAX:

Long Beach Airport is far away but it’s a cute airport! Bye @memabuck2 and grandpa Dave!

And then very very early this morning to take Liam to the local, Ontario airport:

And so, classes start up at the University on Monday, so this is kinda the vacation that wasn’t. Visiting was fun, but not nearly enough down time was had. This has been a running theme in our lives for the past two years, and something’s gotta give. Fingers crossed we can find a way to take some time this summer!

I’ve felt pulled in a million directions, and I really need to re-kindle my making spirit. So much of what I do right now is focussed on making something to sell or develop into a pattern, I need to look for the spark to make something just for making’s sake! as I look forward to the Spring, I’ve got just a few major points to keep in mind:

That’s it! No huge pronouncements, no sweeping goals, no investigating SEO matrices, nada! I need a break! 🙂

How did my December goals do?

I did get all the prep done for my open studio, and those ornaments did very well, perhaps I should offer those at other Fall shows? I love the way hubby and I figured out how to display them: 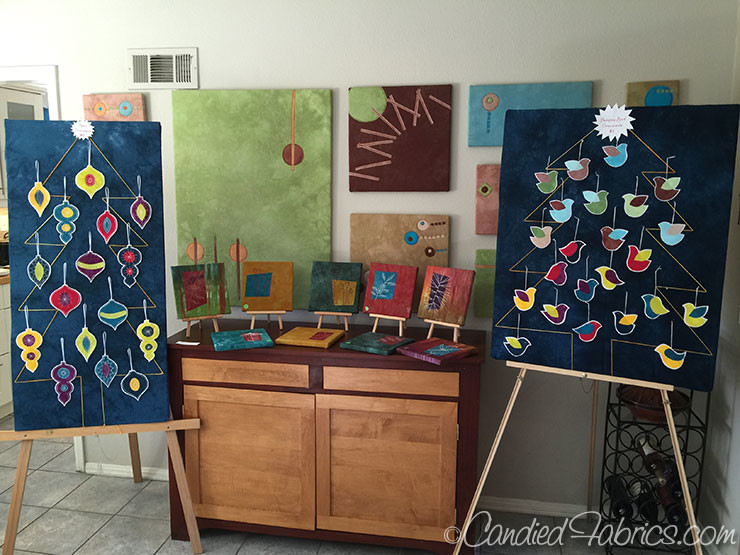 I really enjoyed making the squirrel and bunny for Teigan, but won’t be making many more of these at any time in the future – they are a bit fussy to make! 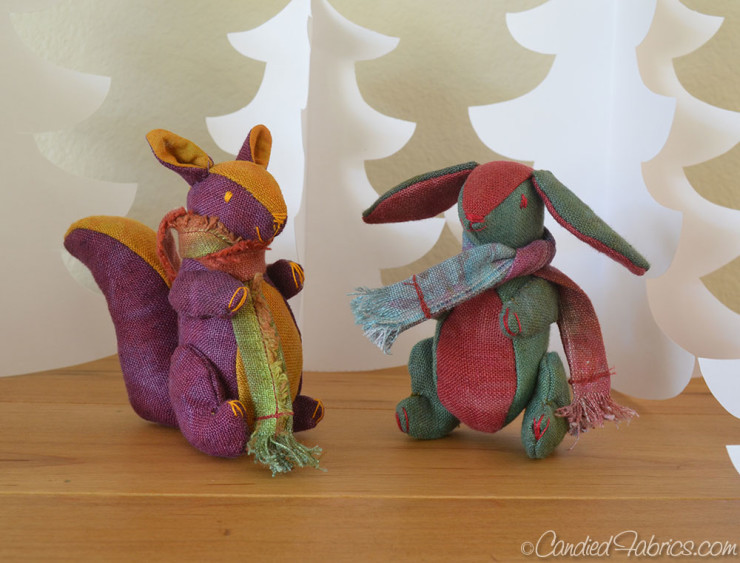 I really enjoyed making just a single bag for Celia! So much of the time when I make a bag, I’m making multiples, so the task looms large. A single bag, even this big take-off tote, takes 4-5 hours from start to finish, but making just one isn’t so overwhelming! 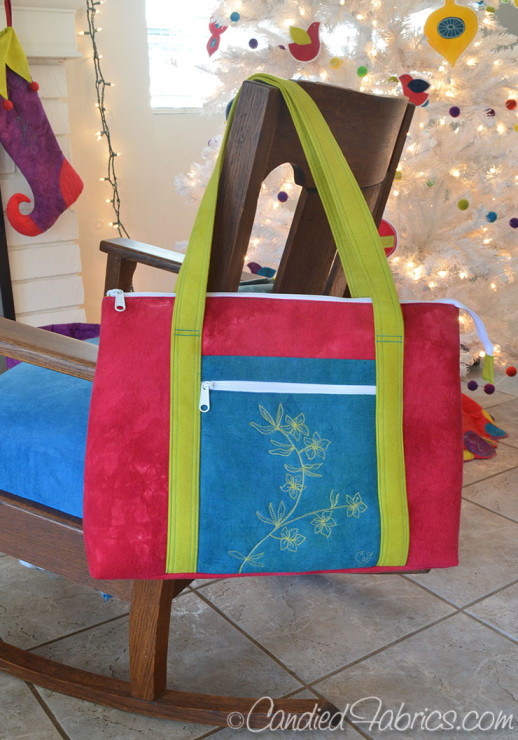 And she really likes it! Apparently when Liam and Celia were roaming around in the rain in LA one day last week, her viola and the bag got coverage from the one umbrella they had between them, while the humans got wet! 😉

And so, here’s how I can start the year focussing on those goals:

My bedroom – it’s like the shoemaker’s children! I’ve had the same quilt on it for many many years now: 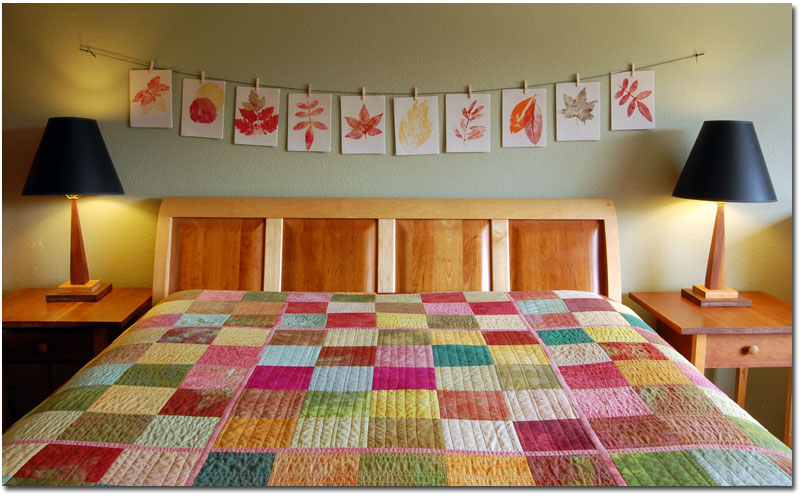 and it is starting to shred! The binding is quite worn away, aiyiyi it really needs to be retired! This has been weighing on my mind all Fall, and I think I’ve got the perfect idea for what to do, and it’s got me jazzed, so hooray 2016, let’s get going!