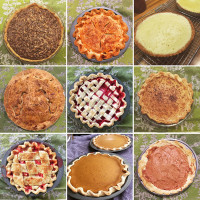 Oh my, what a week! It was chock full of activity, we had a lot of fun, but boy am I tired!!! The holiday week started last Saturday with a trip into LAX. Liam’s plane from Nashville arrived just a couple of hours before his girlfriend Celia’s (she was checking out a college on the east coast) so he waited around for her and I picked them both up. These 2 happy faces say it all: 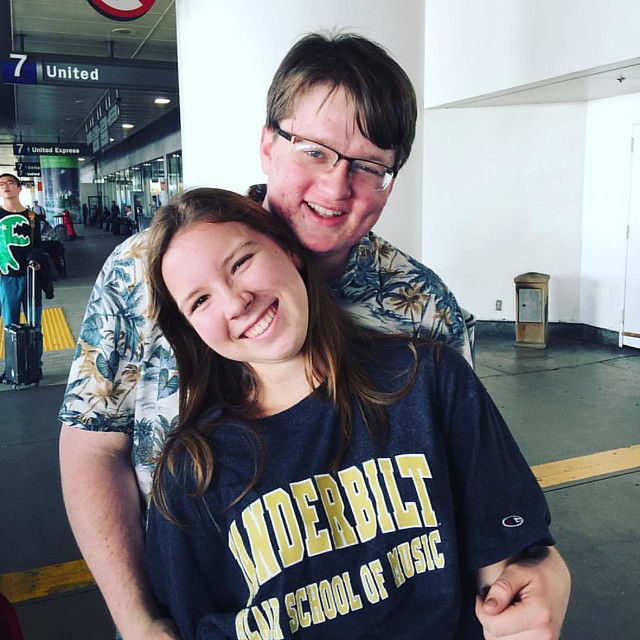 We had to take Celia back to her dorm at her boarding high school in Santa Monica, but we had time for a nice lunch first at a restaurant by the beach: 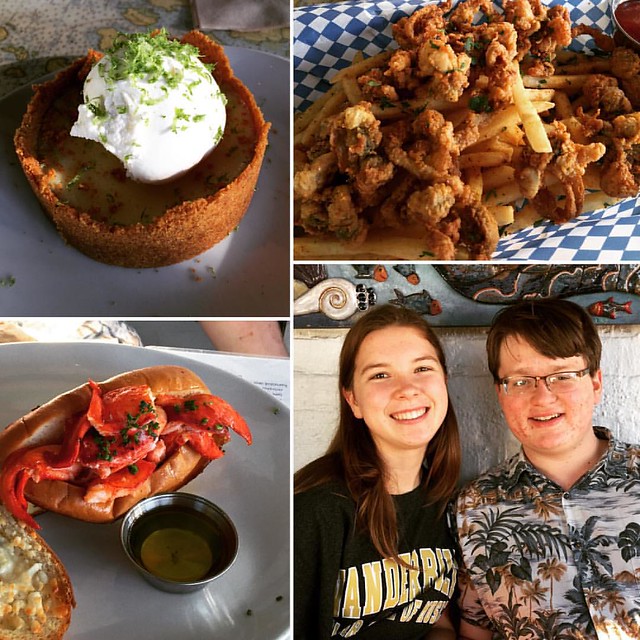 Andrew was off in St. Louis at a conference from Saturday until Tuesday, so the boys and I had to muddle through the early steps of prepping, I also had a lot of meetings at school, and I finally got my new dryer on Monday, hooray for doing laundry! 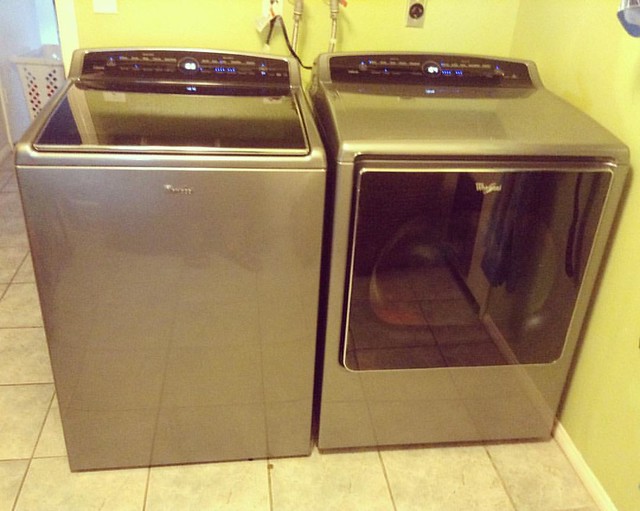 By Tuesday evening hubbby was home, Celia had arrived to spend the rest of the week, most of the shopping was done and it was full speed ahead preparation Wednesday: 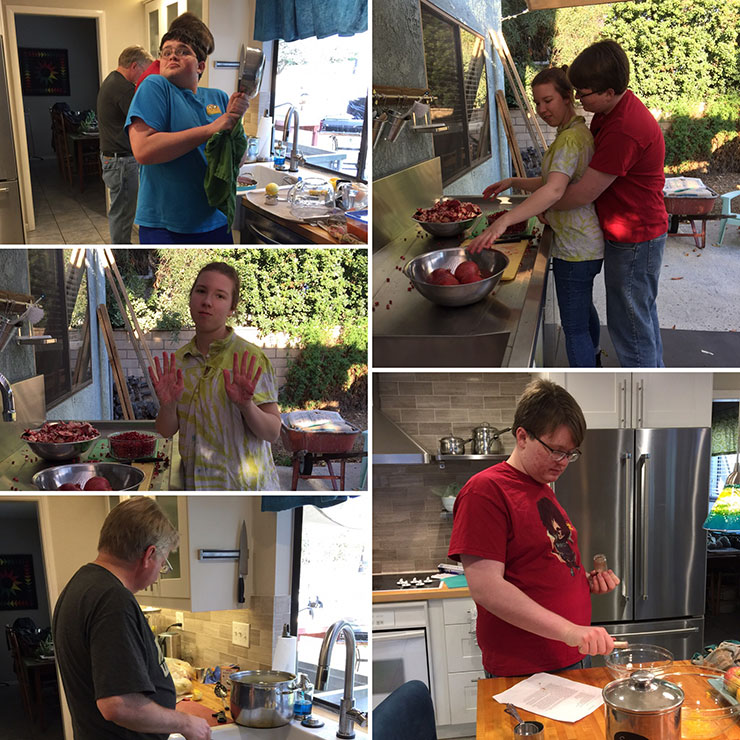 Look at all these vegetables! 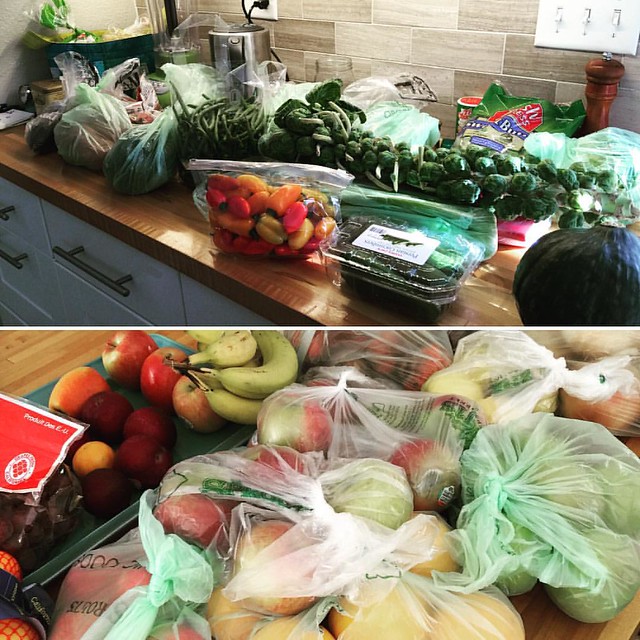 I had to get really organized in order to make 12 pies in one day! I start by figuring which pie pan holds which pie, I print out each recipe and place it in a pan: 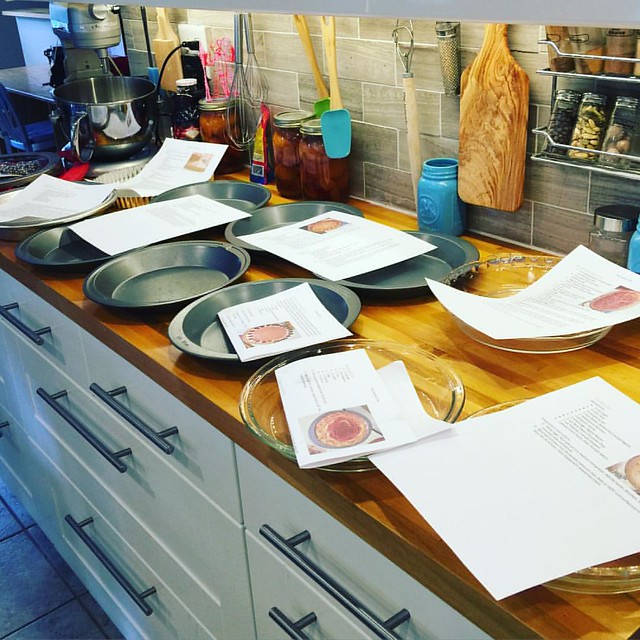 Lots of pies were made, everyone made their favorite, and I made a bunch! 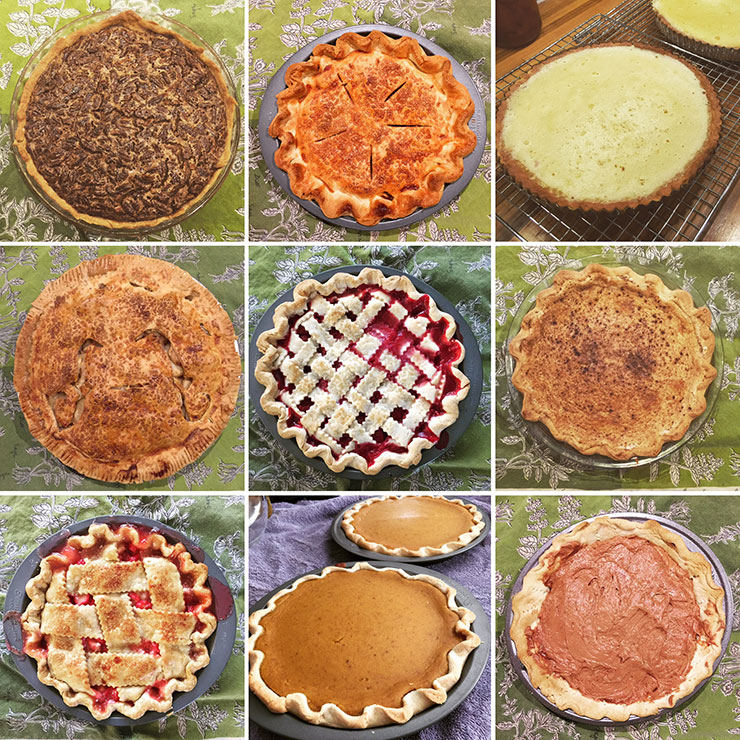 We cooked like crazy on Thursday too, here Liam and Celia are helping make pumpkin ravioli: 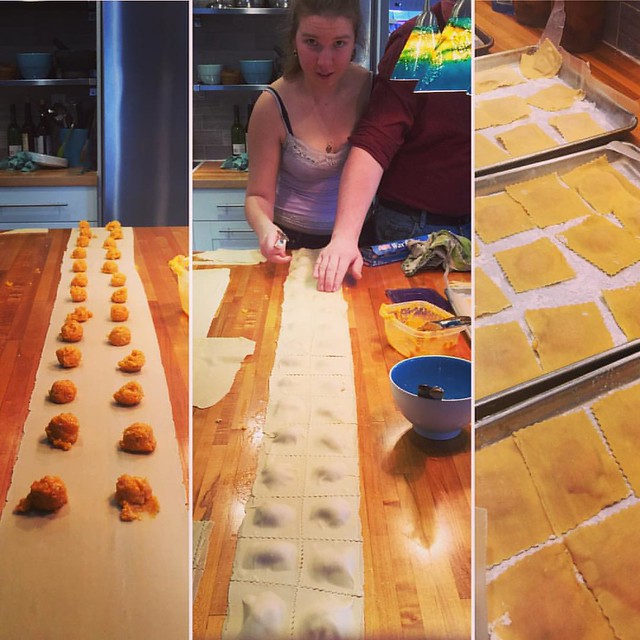 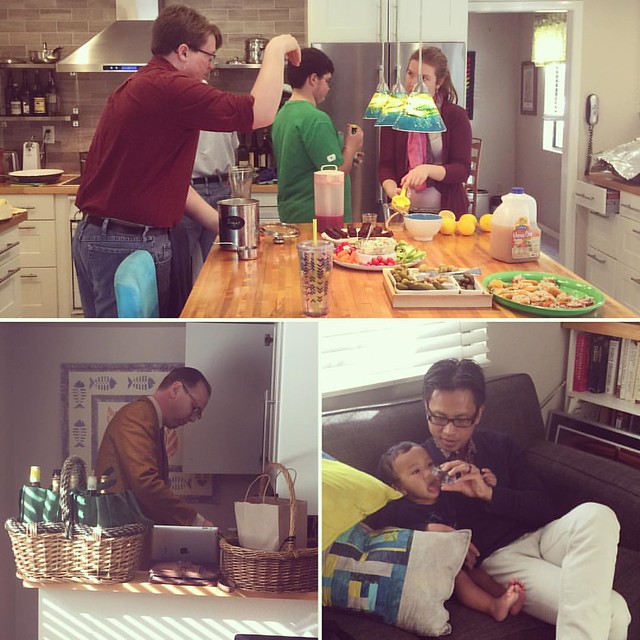 Stirling was exhausted with all the comings and goings: 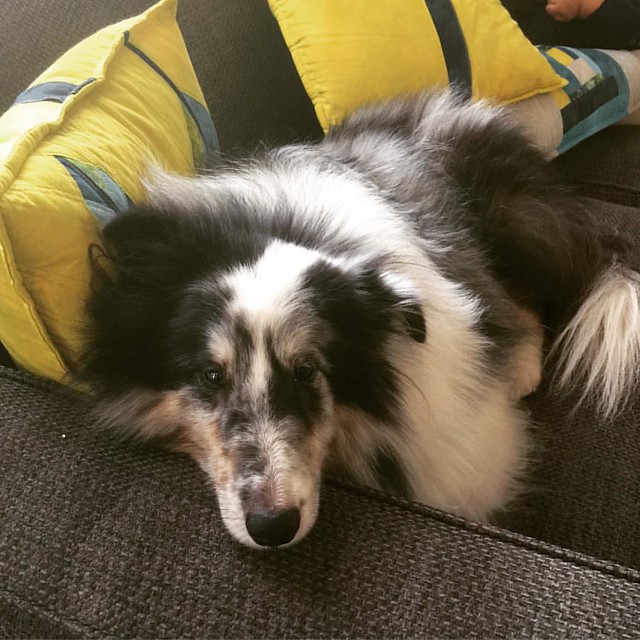 For dinner we had 12 folks, friends from the University as well as a friend of Celia’s: 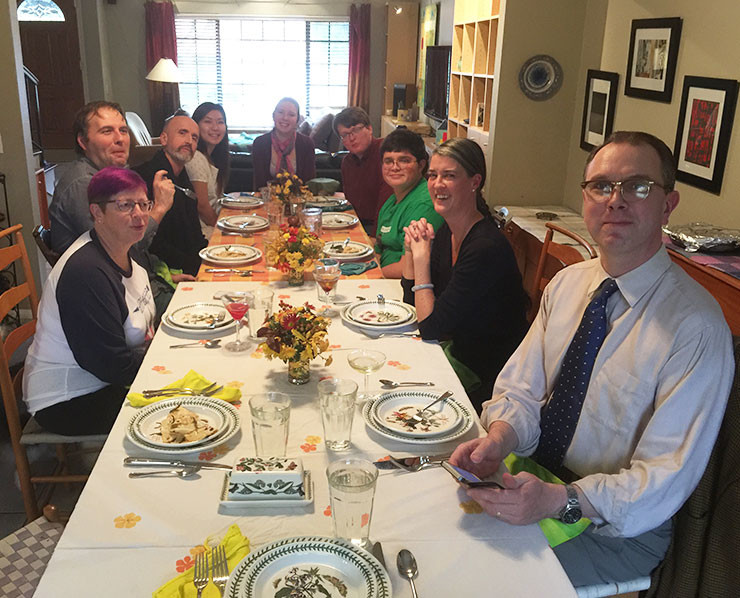 Here’s hubby with the bird! 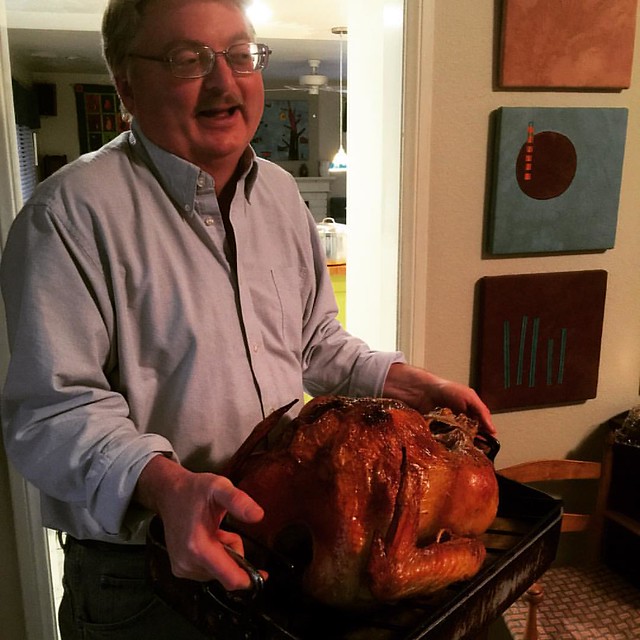 After an awesome dinner and a walk around the block, it was time for pie! Here’s my friend Anne bruleeing the top of a Meyer Lemon Creme Brulee tart: 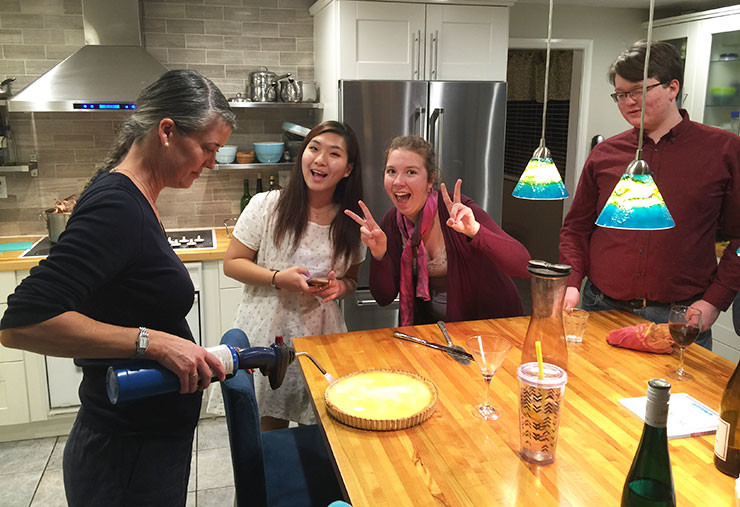 Tony brought 2 more pies, so we had a couple more. We often have more people over for the pie, but this year only my friend Liz made it! 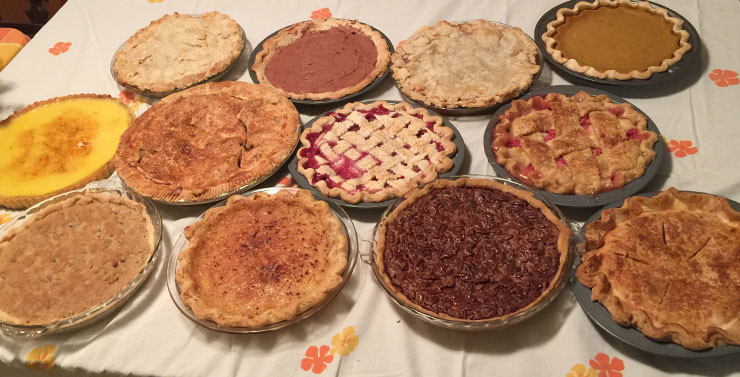 We sent people home with lots of pie, and the next day, after dropping Liam and Celia off at Disney Hall for a double date ending at an LA Phil concert: 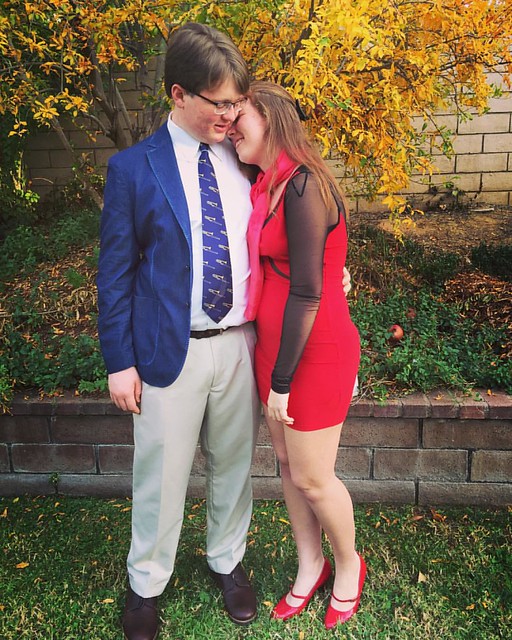 Hubby and I spent the evening with my cousin Jess, her hubby Jim and baby Lucy, along with my Aunt, Uncle, cousin Matt and his new wife Drea. We had a great night, with not a picture taken!

Saturday sped by with clean up, more laundry, I had to work on a sommissioned Christmas stocking, and then, GAH! We were up at 3 AM to take Liam back to LAX for a 6 AM flight. Celia was with us, so after a teary goodbye, we then had to kill a couple hours until breakfast restaurants opened in Venice. After a nice breakfast, it was late enough that we could bring Celia to her friend’s house.

It was a fun filled week, but not very restful! Now the big push to the end of the semester, my open studio, and Christmas!!!!