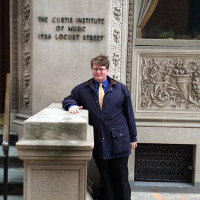 Oh my goodness, Liam and Andrew had a crazy end to the LAST college audition trip! They left last Saturday (Pi Day, so sad, we could have a celebration!) for Philadelphia, to audition at Curtis Institute of Music. (No, Stirling didn’t go with them, I always bring him with me on early morning trips so I can have company for the ride home.)

Curtis, like Colburn in LA, only has enough spots to fully staff one orchestra, some years there may not be a seat at all. Both these schools are well funded, Curtis gives every student a full tuition scholarship, while Colburn is completely free! You can earn a bachelor of music, a master of music or a performer’s certificate at both school, so the competition for each seat includes musicians who already have a Bachelor’s or a Master’s. Anyway, Curtis is the hardest school to get into for a musician, and Liam went for it! 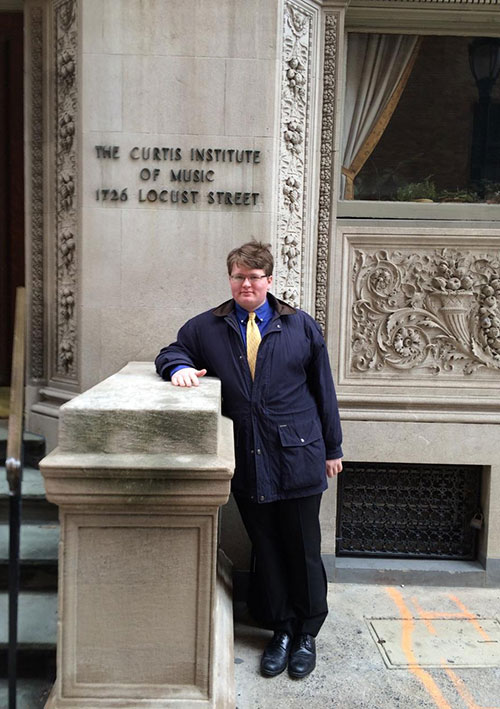 He felt really well about how he played, which is awesome, because the stress can really effect you in high stakes auditions (this happened at Colburn to Liam). Anyway, he found out within the hour that he wasn’t accepted, they called back 4 trombonists for a second round, and he wasn’t one of them. (Hubbys says they all looked old enough to be college seniors or beyond). But, he played his best, which is great! They didn’t come right home though, the American Trombone Workshop was held Wednesday through Saturday in DC, so they spent a day in Philly and then travelled South, trying to find a place for Liam to practice each day as he was a finalist in the Division I (age 17-19) solo tenor trombone competition on Thursday. He won this competition last year, but did not this year. He played really well, and although disappointed with the results, he had a great attitude about it. (It helped to have Andrew there, he could help Liam interpret the judge’s decisions…)

Anyway, they had a great couple of days at the conference, and then got up 4 AM Saturday morning to get started on the plane trip home, they were supposed to be arriving at LAX at 11 AM. BUT NO! They found out at 4 AM that their flight was cancelled….NOOO!!!! Andrew then spent a hairy hour and a half trying to get new flights set up for both of them (the first re-booking only had tix for Andrew, by the time he tried to get Liam on the same flights the seats were gone!) This all happened while I was fast asleep here in SoCal, by the time I woke up at a luxious 8 AM PST, I had an email with their changed plans, they had a total 3 planes and would end up in the Santa Ana airport at 4 pm. I was sad for them, buy happy for me as the Santa Ana airport is a bit closer but way simpler to navigate than LAX. So, I used Google to keep an eye on their planes and about noon, their flight from San Francisco was delayed, a new arrival time of 10 PM! NOOOOOOOOOOOOOOOOOOO!!!!!!!!!!!!!!!!!!!!!!!!!! Once Andrew was on the ground in San Francisco, he got them both put on standby for a flight that would get them into Santa Ana at 6 pm. Although there were 50 people on the standby list, Andrew & Liam were the first people called for the 7 seats on the plane, someone realized how long they had been travelling! They were very happy to see me when I picked them up! Now, Liam’s trombone stayed with him through the trip, but their luggage is still travelling through the air somewhere, as I type this Sunday night, it is supposed to show up on our doorstep overnight…I’ll keep you posted! 🙂

So….now what??? Well, we have some waiting to do! Liam’s been accepted by 4 schools (IU, UoR, Vanderbilt and DePaul), rejected by 2 (Colburn and Curtis) and we are waiting to hear from 3 (Northwestern, Juilliard and Manhattan School of Music). Letters/emails from those last 3 are due in late March and April 1. And then there’s the money part: scholarship info is also due In the next week or so and then he has until May 1 to make up his mind! Some stress has been relieved already with very generous scholarship opportunities already on the table from 2 of the schools (along with the free tuition he would get at the UoR because we work there). Once we know all the options, we’ll sit down and figure it all out. He really doesn’t have a first choice, each school has something unique, special and awesome! What he does already know is that the conservatories are too limited at this point. He’s got a lot of interests and wants a chance to explore them, not every school offers that option.

A couple more weeks and this will all be over…and Liam will be headed to someplace awesome to explore his passion!

3 Responses to One Moment | The Auditions are Finally Over! (For now…)