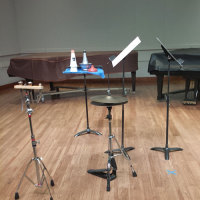 My semester has started with a BANG! So many things going on, some of which are pretty big milestones, some not so big but still worthy of noting, I’ve not had time to even process lots of them, never mind blog them, but I wanted to get the high points down here for my own memory, plus a few long time readers may be interested to here about some of the goings on! I’ve not had time to snapa lot of pictures, and turns out that half the pictures I did snap were corrupted! (I’m hoping it is due to the sheer amount of pictures on the chip on my phone, not something more fundamentally screwed up. I just deleted 300 pix and hope that does the trick!)

The new semester started last Monday the 5th. It was especially busy as the dossier for my 6 year senior review was due last Friday. The bulk of that is a long, self-reflective docomuent I had to write, which of course I put off until last week. GAH! 6 years of student evaluations read all at once, 12 pages of navel gazing later, it’s done and dusted!

Last Thursday, Liam took his drivers liscense test (for the third time…) and PASSED! HOORAY! Although it’s awesome, he’s not supposed to drive alone with anyone under the age of 25 in the car with him until he’s 18 in May, which means he can’t really take over Logan taxi duties yet. Boo! 🙂 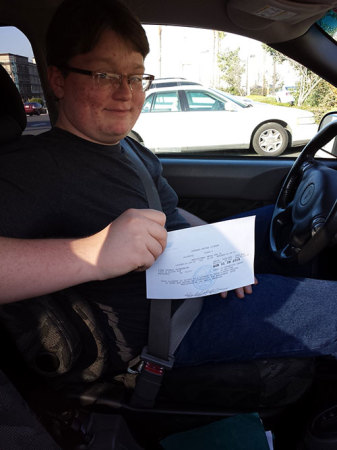 On top of that, I’ve been practicing my flute! (What, you didn’t know I was a flute player? 😉 I have a double degree, in Flute Performance and Biology from Oberlin College and Conservatory. By the time I was done with that I’d decided to go the Biology route for my career, but occasionally found a reason to play. Those reasons have been really scarce the past 10 years and supplanted by the creative time I spend doing my textile art.) Anyway, last year, hubby’s sister Ann and brother-in-law Shaun commissioned a duet for flute and trombone (specifically, Andrew and myself) from Gunther Schuller, a pretty darn important American composer. Gunther spent a week on campus four years ago as the first recipient of the Loewe award (Frederick Loewe Symposium on American Music), as a composer in residence. He knows just how awesome my hubby is as a trombone player, especially a trombonist who can play contemporary music, so he made sure to pull out all the stops when writing Andrew’s part! We received the piece last Fall and premiered it last Sunday at the University of Redlands Faculty showcase concert. So Ann and Shaun came to visit and hear the premier. Although they didn’t stay at our house, we had plenty of visiting and general merriment tucked in amongst all the things we had to do. Once of which was the delivery of a new chaise for me to blog upon (which I’m doing this very minute!): 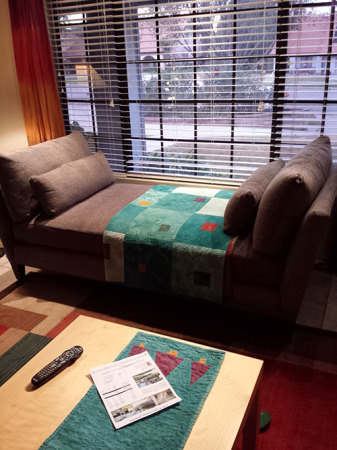 Hubby also had rehearsal for a Redlands Symphony concert he played in last Saturday, but he still had time to make us an awesome Paella on Friday night: 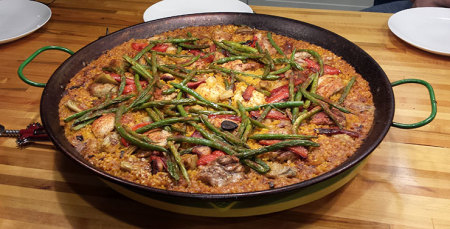 Sigh, here’s the only picture of Ann and Shaun that actually came off the camera chip, thanks for the photo bomb Logan! 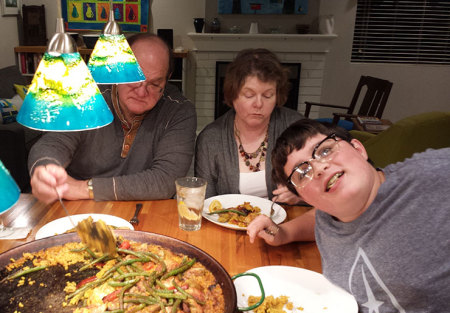 I spent some early mornings baking, like prepping all this dough for a pizzza dinner: 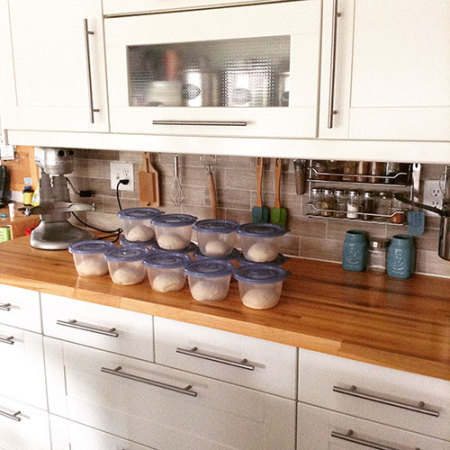 Our mandarin orange tree is full of deliciousness right now. I made sure to send lots of fresh citrus home with Ann and Shaun on Monday! 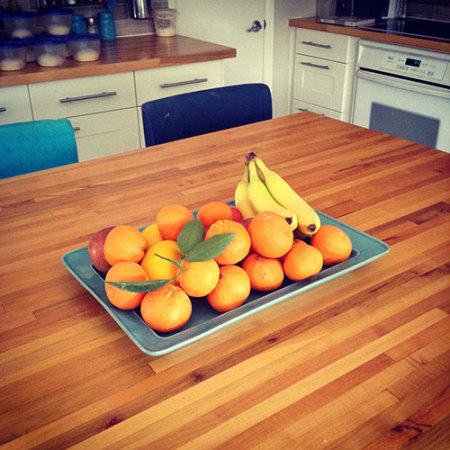 I also had to do a bit of dyeing for a customer, it started to rain, so I batched them under this table: 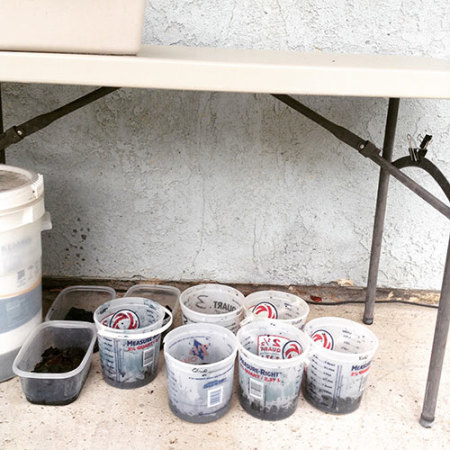 Life has been so jam-packed that Andrew had to rehearse a brass trio at the house right before the Redlands Symphony concert on Saturday night. He’s been experimenting with curing and smoking meat for the past year, here are the tuba  (Scott Sutherland) and french horn player (Laura Brennes) enjoying a Montreal Smoked Meat sandwich: 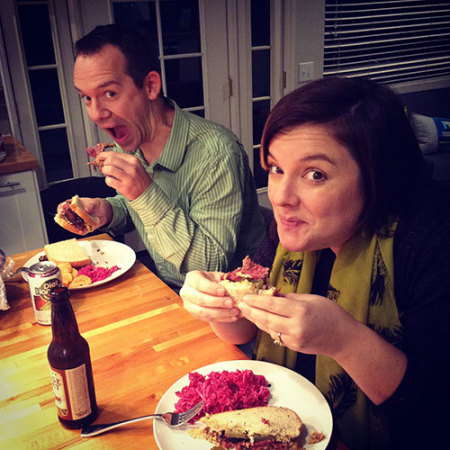 Our Meyer lemons are also ripe, so I had to make this meyer lemon cornmeal upside down cake, the recipe was in Sunset magazine this month. Verdict: delicious! 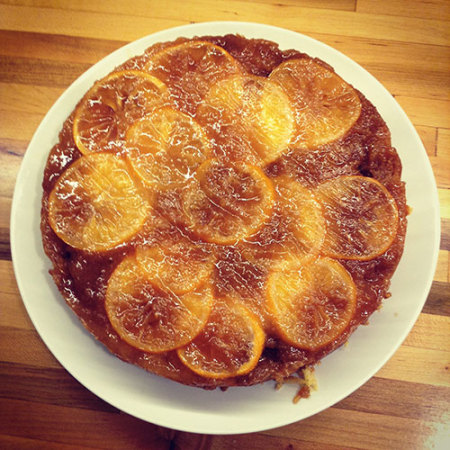 Sunday afternoon we didn’t let a little rain deter us from firing up the oven and making pizza! 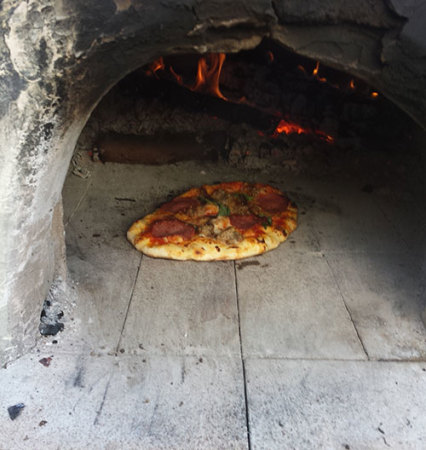 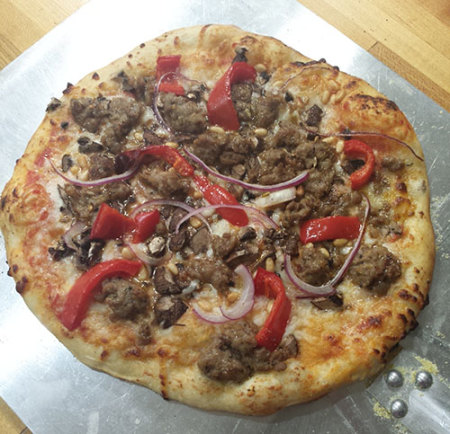 Sunday night came, I was a bundle of nerves! Here’s the setup for the piece Gunther wrote for Andrew & I: 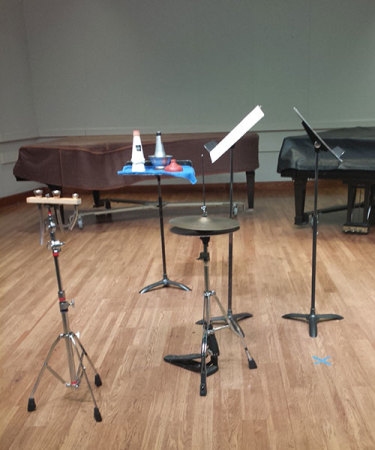 I just had to play the flute (hah!), there were some multiphonic and other funky techniques thrown in for me, but Andrew also had to deal with 3 different mutes, 3 mouthpieces and a high-hat cymbal! Here’s the program notes Shaun wrote about the piece:

Me and You: A Duet for Trombone and Flute by Pulitzer Prize-winning composer Gunther Schuller was commissioned October 28, 2013 by Shaun O’L. Higgins and Ann Glendening, and completed by the composer August 29, 2014. Tonight’s performance [January 11, 2015] by Dr. Andrew Glendening and Candice Glendening at the Frederick Loewe Performance Hall at the University of Redlands marks its first public performance.

According to Higgins, he and his wife (Andrew Glendening’s sister), have known the composer through their patronage of musical events in the Pacific Northwest, particularly the Northwest Bach Festival in Spokane, Washington.

“When Gunther retired as the Bach Festival’s artistic director in 2013, I asked him if he’d be interested in working up a trombone-flute duet which we could gift to Andrew and Candy, whom Gunther knew as result of being the first recipient of the Loewe award at Redlands. I was not aware of any serious, original music for trombone and flute and, to my surprise, neither was Gunther. Despite a heavy schedule of commissions—as I recall, this was one of nearly 20 on his plate last year—Gunther liked the challenge of working with this combination of instruments, as well as doing a commission for a husband-wife duo. He had just completed the first volume of his autobiography, dedicated to his late wife of 49 years, Marjorie Black, of whom he writes lovingly throughout its pages. The result is a piece commissioned by a couple, for a couple, and written by a composer who was part of a great couple.

“Prior to completion of the commission, all we knew about it was its approximate length, and that Gunther wanted it to employ as many contemporary techniques for each instrument as possible. When Gunther got around to entitling the piece, he called it Me and You, and he stressed the importance of the two sets of arrows he incorporated into the title. He didn’t tell me why, but I suspect it’s because (as in a good marriage or partnership) the duet is playful, even flirty, sometimes almost bickering, and has its moments of coming together and moving apart. Ideally, the piece will find a home in the repertoire of both trombone and flute, and spur future interest in the unusual possibilities they offer in combination.”

I’ve only got 2 photographs of the performance from my friend Liz. The hall was PACKED, with over 250 people. (All the music majors are required to go to this concert, because most of their teachers played at least once, so that’s a good portion of it. But they ended up bringing in enough chairs to add a row or two in the front and back, plus on either side of the aisle. I’m thinking that the fire marshal would have shut the recital down!) 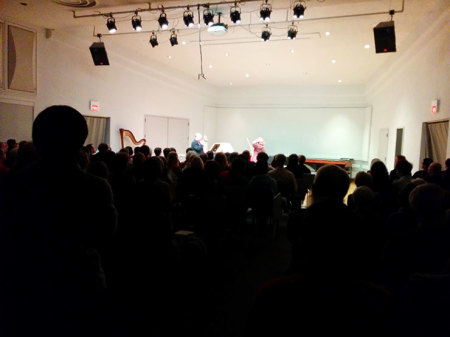 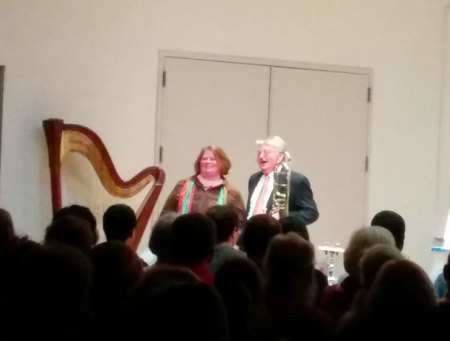 SO! We played it, and were pretty happy with how everything came out. We’re most anxious to get a “clean” recording in an empty hall and send it to Gunther and here his reactions to it.

Now, I’m busy scrambling to get things all set for me to be gone for a few days, Liam and I leave for Indiana tomorrow afternoon, he’s auditioning for the Jacobs School of Music on Saturday! Then the auditions come pretty quickly for the next few weeks, all his work for the past four years is coming to a conclusion starting now! Fingers crossed he plays his best!

2 Responses to One Moment | Some Weeks are Longer Than Others!