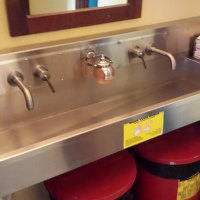 Greetings from Scottsdale! Hubby had to go to the NASM (National Association of Schools of Music) conference and I came along with him. We’re staying at a fun resort where you get bagpipe music at sunset:

Sunset bagpipes from the balcony! (6 floors up and 100 feet back, a safe distance to be from a piper!)

We had a lovely dinner out last night, I had a roasted beet salad with whipped goat cheese, pistachios and balsamic honey dressing: 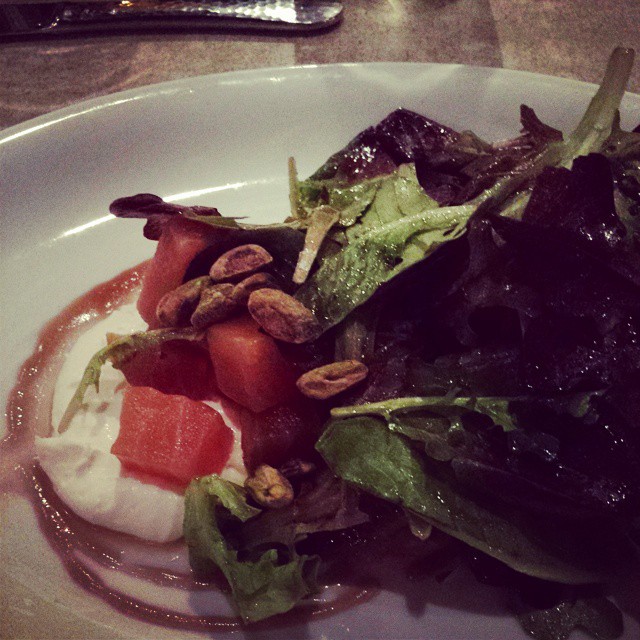 Then seared scallops with caramelized cauliflower, snap peas and bacon: 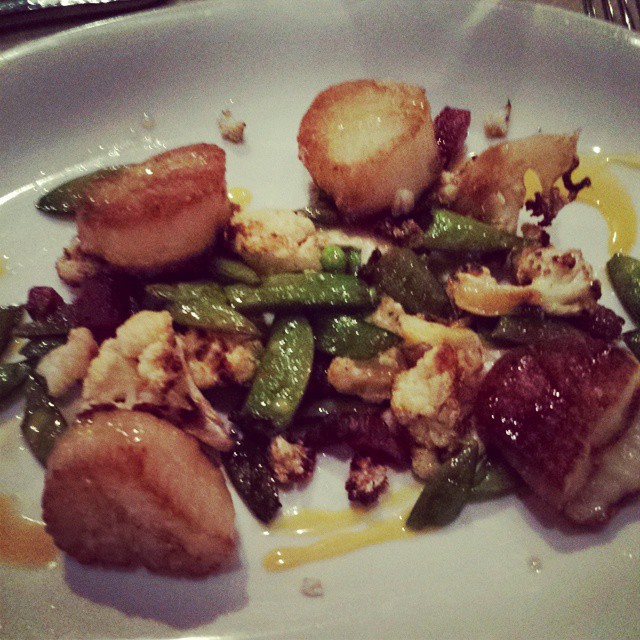 Finally, an amazing dessert called something like “Decadent chocolate bars of sin!” 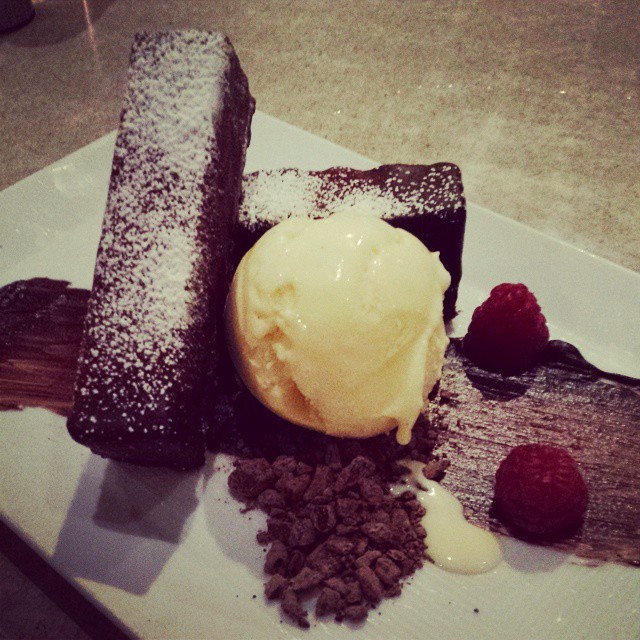 Oh my goodness it was fantastic! We realized that this was only the second time the two of us had been out to dinner by ourselves this whole year, the first time being to celebrate our anniversary in June. Yup, we’re busy, and when we’re not working we’re doing something with the boys! So between the long car ride here and our dinners out while we’re at the convention, we’re having time to talk about all sorts of things. Of course we talk a lot about the kids, and planning Thanksgiving, but there’s also been time to revisit an idea that’s been percolating in my head since mid-September: my dream dyeing sink!

In mid-September, we had lunch at a pub in Claremont while running errands and this sink was outside the restrooms: 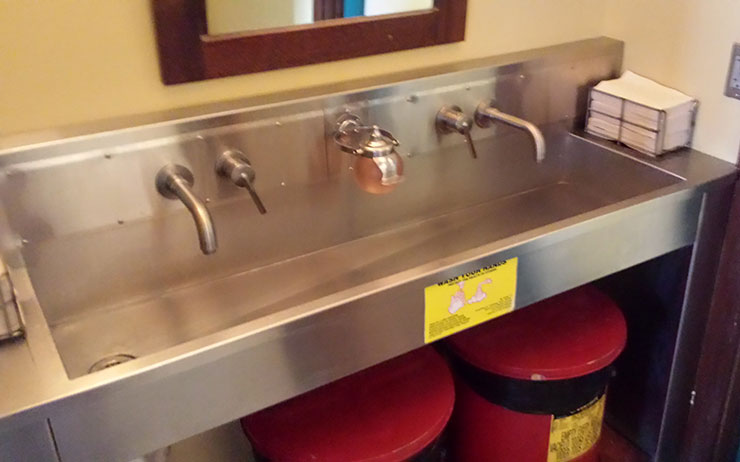 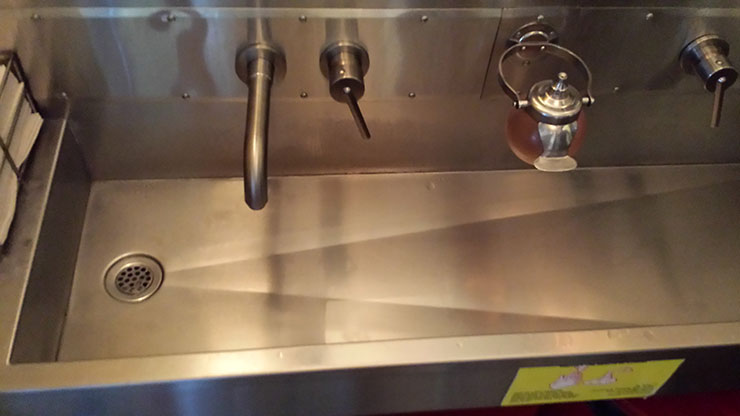 It’s long, narrow, and shallow. It set me to thinking about my current dye setup and how a sink like this would be awesome! 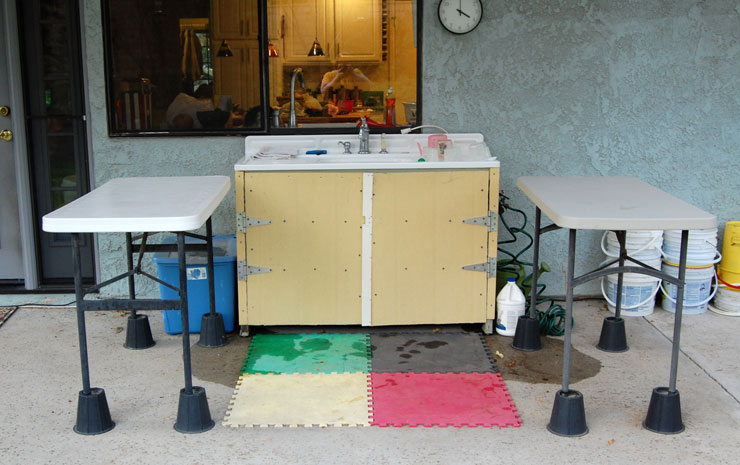 The cupboard isn’t much to look at, but having drainboards on each side is very handy. But the sink itself is very small, it’s hard to have a basin in there filled with water to put used dye utensils and do anything else (like filling a graduated cylinder with water) too.

Although I used to set up my space in the U-shape as shown above, I now usually work like this: 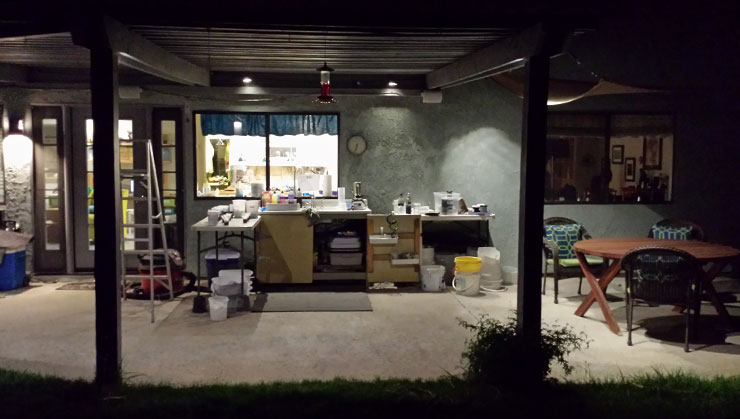 The right hand door is open because it has a couple of door shelves that hold little things I use quite frequently. The folding table to the right holds dyes, fabric in dispans waiting to be dyed, other things that I may need, but the main work space is that folding table on the left.

Seeing that sink in the restaurant got me thinking it would be great to have a long, narrow sink, long enough that I could fit one or two dispans in there (while dyeing the fabric inside) and still have room to use the faucdet. It also would be great to have space along the back to place all my dye bottles. When hubby and I started talking about this he pointed out how great it would be to have the sink centered between the two windows, rather than where it is now. We could then swap the 3 functional zones of the patio, putting the dyeing to the far right, the eating table in the center, then the grilling to the left. 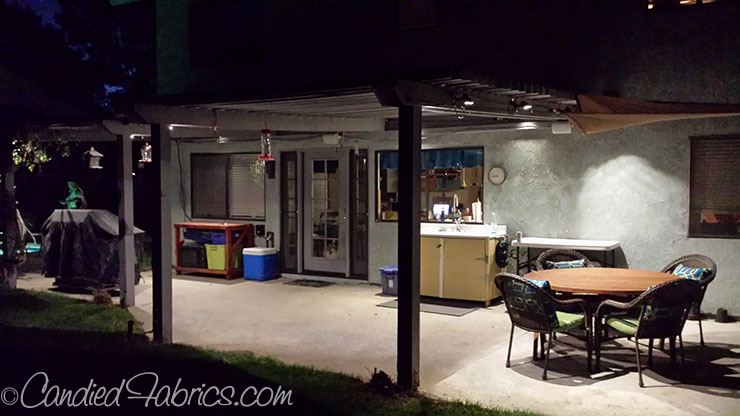 So I fired up Illustrator and mocked up the patio:

Yep, it all fits! The folding table (I would only need one with a new longer sink/worktop) can either go up against the house or folded away if we wanted. During a party, we could clean the sink really well, put bins of ice in the sink part and still have room to lay out appetizers or what have you. And when we have a pizza party, I’ve got room to set up a big folding table at the far right of the patio for pizza prep.

So we talked about this in the car on the trip and decided we should try to make this happen, and I told hubby that I would need help finding someone to actually make this dream sink, and he found a stainless steel contractor 30 min from our house that looks like the perfect place to make this! Fingers crossed, this dream may actually become a reality!

I’m really glad we went into that pub in September!!!!

3 Responses to My Dream Dyeing Sink