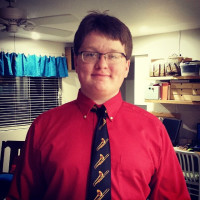 I’ve had a couple of exciting days! Saturday was graduation at the University of Redlands. Here’s the view from the stage:

And here’s a cool shot from the University’s website:

It’s quite a happy day for lots of students and their proud parents!

Liam had a busy day on Sunday competing in the Redlands Bowl Young Artist competition. The Redlands Bowl is a summer music festival (75 years and counting) here in town, they sponsor a competition each year to put together a concert of music by young musicians. It’s quite competitive because between the prize money ($500 for the junior (10-18 years) division and $1000 for the senior (18-30) division) and the opportunity to perform as a soloist at the Redlands Bowl, musicians come from all over Southern California.

The first round Liam had to play, from memory, 3 different pieces of 3 different time eras. The memory aspect is a tough one for brass players, although he has wanted to do this competition for a few years now, this is the first year he had the ability to memorize 3 completely different pieces of music at once. His audition was at 2, and they posted a list of the finalists at 5:30, the day concludes with 14 finalists playing 5 minutes each at a final recital.

Liam was the only instrumentalist to make the finals, and he played great! Especially because we’d been told he would be playing after the pianists, so he was off in another room warming up and his accompanist was off in another room. Well, the singers had finished and somebody gets up and says, “and now, Liam Glendening!” and I have to say…ummm, you told us he was later so he’s off warming up) as Andrew was running out the door to get him and Stephanie. So Liam had to run into the recital hall and play: bing bang boom!! If that had been me, I’m sure I would have been totally frazzled, but he handled it with aplomb! Here’s the only picture I could take, at the end of the performance:

Very fuzzy and grainy, but you can still see the smile on both his and Stephanie’s face!

At the end of all the performances we all had punch and cookies while the judges deliberated, 15 minutes later we all found out that Liam was one of the winners, hooray!!!

They then whisk all the winners back to the hall for a group picture:

and they all get an envelope with lots of instructions for the performance this summer (they all will get presented their checks during the concert this summer). Here’s an article that came out in the paper Tuesday with more details and the names of the other winners. Cool story, Emily Collins, the woman seated on the right just finished her Master’s at the U of R in vocal performance – she worked in my husband’s office and was a huge help for several months last year when his administrative assistant was out. She really filled that hall with a powerful voice, I can’t wait to see where she goes!

Here he is at home later that night:

What I see is happiness and relief!!! He has had so many auditions, and this is the last one for awhile! Both Monday and Tuesday he’s exclaimed “it’s so nice to be able to practice just to PRACTICE!”

Monday, there was another reason to celebrate. I’ve been a member of the Personnel Policies Committe at the UoR this year, and we finished the work of several years by getting a faculty senate designed, the constitution re-written to reflect those changes and passed by the faculty, and ultimately the Board of Trustees. That calls for a celebration, doesn’t it?

Andrew made a bunch of tapas and a lovely paella:

I made a cheesecake, the sourcream topping was runny because I added too much lemon juice, but it tasted good:

Most important we got to sit back relax, enjoy each other’s company and rejoice in a job well done!

2 Responses to Lots of Celebrations!