Well, for my 16 year old son, this is the end result of years of practice!

It is with GREAT JOY and EXTREME PRIDE that I shout to the rooftops: Liam just found out he’s in the National Youth Orchestra of the USA! This fully funded group (all we have to do is fly him to NY) will rehearse for 2 weeks in the summer and then play at summer music festivals all across the country this July/August.

They’ll spend 2 weeks rehearsing at Purchase College in New York. The first week they’ll work with a the director James Ross, and will be coached by members of major symphony orchestras: the trombones will be coached by Tim Higgins, principal of the San Francisco Symphony Orchestra. At some point, the guest conductor for this season David Robertson, the director of the St. Louis Symphony Orchestra who has a huge list of  performances with top notch symphonies all over the world on his resume will take over the podium.

The repetoire for this season is: a new work commissioned by Carnegie Hall for this group by  Samuel Carl Adams, Bernstein’s Symphonic Dances from West Side Story (this is a great, really hard arrangement!), Britten’s Violin Concerto, Op. 15 and Mussorgsky’s Pictures at an Exhibition. Gil Shaham, an internationally famous violinist will play the Concerto with them.

If you’ve been reading my blog for awhile, you know that I’ve been chronicalling Liam’s progress as a trombonist. This Fall was full of auditions, with travel to an All National Honor group as well, and for him, the most important one was for the NYO-USA. He found out about this group 2 years ago when it was launched, and has been dreaming about being in it when it was time since that moment, and working on the excerpts for the audition since the day they were announced last Spring. This group is specifically for musicians poised to enter college, so he can only be part of this group this Summer (and the next), so he was competing against his peers, which is great (as opposed to the 2 big trombone solo competitions he entered this year: his competitors at those include freshmen in music schools). And because this experience is fully funded (I believe they have financial assistance for those who would have trouble getting their kid to New York), the competition isn’t hindered by money, which is fabulous. This group  made NPR’s “Best of Classical 2013” list, and there was a great story on NPR’s Weekend Edition last summer if you’d like to learn more.

Audition videos were due in mid-November, and last Friday was the day that emails were to be sent to all the kids letting them know where they stood. Because they are located in New York, I figured that an email sent at 9AM EST wasn’t out of the question, so I added Liam’s email to my iPad so I could check it at 6 AM PST. Hah! I woke up at 2AM, 4 AM, 5 AM as well, I was pretty much a basket case. The email came through just before 1, luckily between classes so Liam could check the email right away, but it sure was a little anti-climactic for him! He was still a happy camper when I picked him up from school:

We made up for the anti climax of finding out in between lunch and history by going out to dinner at our favorite place for celebrations: King’s Fish House.

It was a bit tough because Andrew was playing with the San Diego Symphony Friday & Saturday nights along with a Sunday matinee, so he had to eat chicken nuggets in a tuxedo in traffic while Liam was having a lobster!

I’ve had fun randomly reminding Liam throughout the weekend he got in. And we’re already starting to make plans to see if we can get to the concert in the Grand Teton’s as well as the Disney Hall gig.

Liam gets another email today with a lot more details which will make things seem a bit more real – he told me Sunday night that it still seems like he’s hoping to get in rather than that he got in. His biggest worry of all is…the red pants! 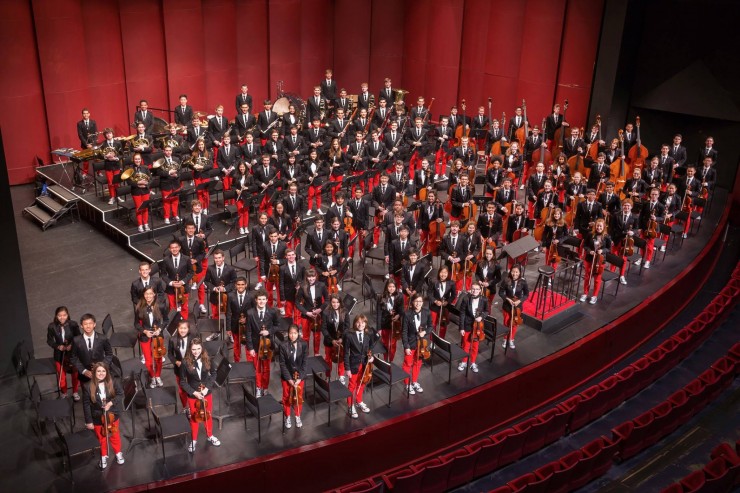 According to this fun infographic:

it’s a “new look” styled by Fred Bernstein, courtesy of Macy’s…I told Liam that because it was a “new look”, that it may be around for awhile, so he’s going to have to resign himself to having measurements and alterations to a pair of RED PANTS!

No matter what they wear, they’re going to sound awesome and he’s going to have an incredible experience!

8 Responses to How do you get to Carnegie Hall?