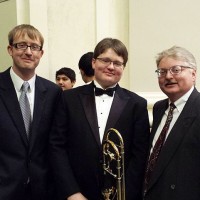 Last weekend was yet another concert for Liam! At least this one was right here at the University of Redlands so there was no driving involved! BUT, because it was at the University of Redlands with Hubby as the Dean of the School of Music right in the thick of things, we hosted a dinner for the guest conductor as well as all the local band directors. That meant that last Friday I made a lot of pizza dough, fired up the pizza oven:

and then cooked a lot of pizzas. It was dark by then so no decent pictures!

Anyway, it was a fun, if busy day, and the next day was the concert: 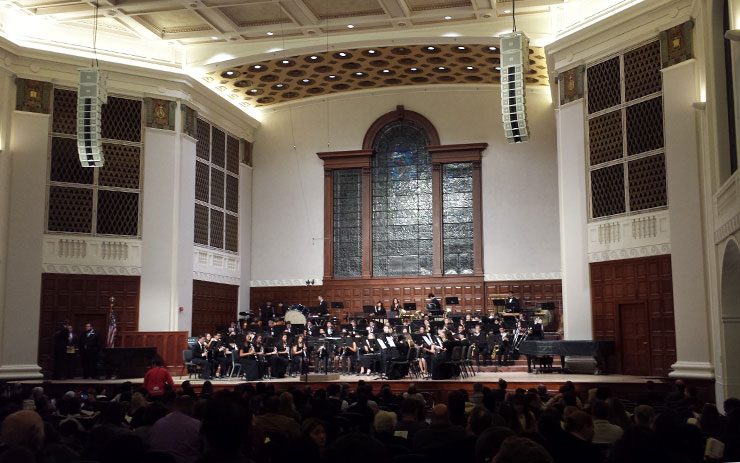 They have a fun way to acknowledge kids who’ve been in these groups for years: they all start standing up and sit down when they call out a number higher than the years they’ve participated. Liam and one other girl in the band have been in an all county honor group for 8 years!

Here’s my hubby with 2 generations of his students: Brian Silvey (on the left) was one of his first trombone students years ago at Morehead state. He now is a band director and teaches music ed at Missouri State. He was the honor band conductor tonight and really did an excellent job. And of course Liam, who’s been having lessons while Andrew cooks dinner for the past 9 years!

← Giveaway | Quilting Arts February/March 2014
How do you get to Carnegie Hall? →

One Response to Another Weekend Another Concert | All County Honor Band