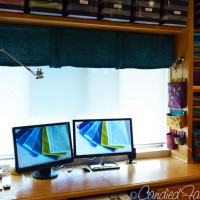 January seemed so long, with 31 whole days it was so full of potential! And yet, it’s over! I actually was very optimistic with these plans:

My QAYG video tutorial was the biggest thing holding over my head, I am so glad that’s done! It was quite popular, sending my hit counter soaring for a couple of days. But more importantly, my particular method seems to have really  been a great solution for lots of quilters out there, and that is awesome!

I’ve also started a special monthly extra for all the members of my online classes: a calendar for their computer desktop. They will feature a picture of hand dyed fabrics inspired by the month, as well as a calendar. Here’s January’s on my monitors: 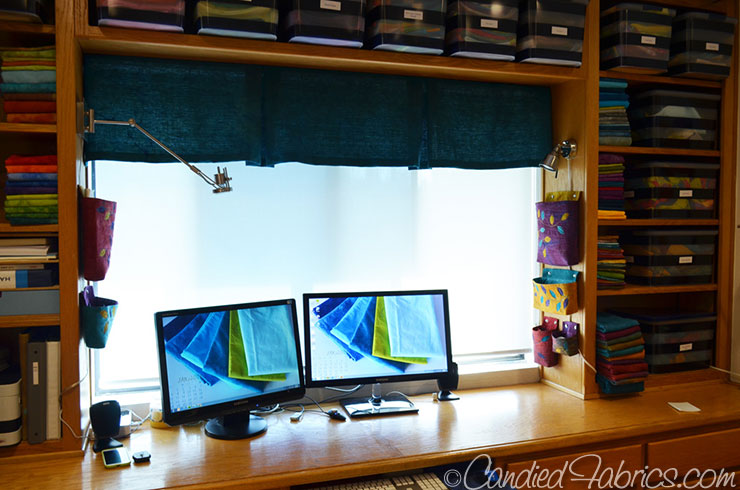 I was happy to hear that lots of my students really liked that I did this. My word of the year is “engage”, and I thought that this would be a great way to stay connected with students after they’d finished a class. I’m also a computer geek who loves to take pictures of hand dyed fabrics, so it’s a fun exercise for me as well!

Of course, I didn’t get Dyeing 103 launched! Ack! It’s close, very close, but taking off the entire weekend for Liam’s All Southern Honor Orchestra & Disneyland with Logan derailed the whole process, and that was something that just had to happen. “Candy”, you may think to yourself, “why not just put everything else on the list on hold until you get the thing you really want done done???” Sigh, I wish it were that easy! These classes are so massive to build, that there’s no way I could keep Candied Fabrics the business humming along if I stopped everything. And some of these things really end up yammering at my brain so much that I just HAVE to get them done so my brain can be quiet! Case in point: inventory. Taxes aren’t due until April 15th, so there’s no rush on that. But even though I don’t have any shows, I’ve always got a slow, steady trickle of silk scarf sales. My scarf stock spreadsheet is not a work of art and at the end of every year (and often a time or 2 in between) I’ve got to compare the actual inventory to the spreadsheet and fix some mistakes. I’d not done that and made some special notations for the 4, scarves sold last month and then I got an email from a customer today who needed a couple. I realized that if I didn’t stop and do that inventory I was going to be mighty confused when I actually did it! So I just did it, and now the bulk of inventory for taxes is done!

Anyway, lets see how much I can focus this month on what I want to do most:

One Response to Meetup | February Goals