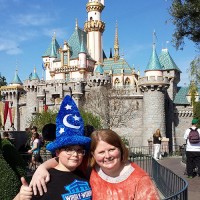 The boys and I had a fabulous and exhausting weekend! Liam was Principal Trombone in the All Southern Honor Orchestra, with 2 days of rehearsals and then the performance in a Disneyland Hotel. As all the kids in this group technically live in commuting distance of Anaheim, they don’t have the kids stay overnight. Rather than drive into Anaheim 6 times in 3 days (about 90 minutes IF traffic is working OK, but it’s Southern California so we can’t always count on that), hubby got the honor of delivering Liam Friday morning and returning to a weekend full of work and RSO rehearsals and performances. I taught my class on Friday and then when Logan was done with school we drove into Anaheim and checked into a non-Disney hotel (I’d say “cheaper”an but that doesn’t really describe the price of the hotel room. Lets just say it was less than an official Disney hotel!). The 3 of us spent the weekend in Anaheim, leaving Andrew home with Stirling.

Friday night we went out to dinner at Downtown Disney, and had ice cream while watching the fireworks overhead:

While Liam was rehearsing all day Saturday, Logan and I spent the day in Disneyland!

We started the day in Tomorrowland – I LOVE this retro cool sculpture/part of the rocket ride:

After a great ride on Space Mountain, we did the “Star Tours” ride, where I ended up being the rebel spy, Logan thought was the BOMB! 🙂

Logan got to drive a car…sort of…and he discovered it’s not as easy as when he’s in the back seat complaining about his Liam driving!

Next, the iconic Fantasyland! I stopped to take a picture of a couple at this spot and they were happy to return the favor! 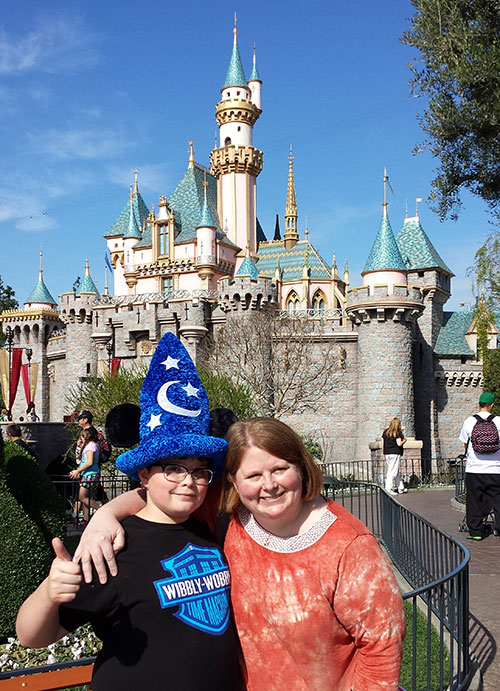 Logan wanted a “Sorecer’s Apprentice” hat, once I got it for him he wore it the rest of the day and loved it!
Disneyland is really built mostly for younger kids, he is just on the cusp of being too old for all the “little kid” rides, so I was happy to see him so excited for “Mr. Toad’s Wild Ride”, which isn’t very wild! 😉

Of course, we rode the iconic teacups, and got to pick an awesome orange one!

In Toontown, Logan was sad to see somebody had been squished by a safe: 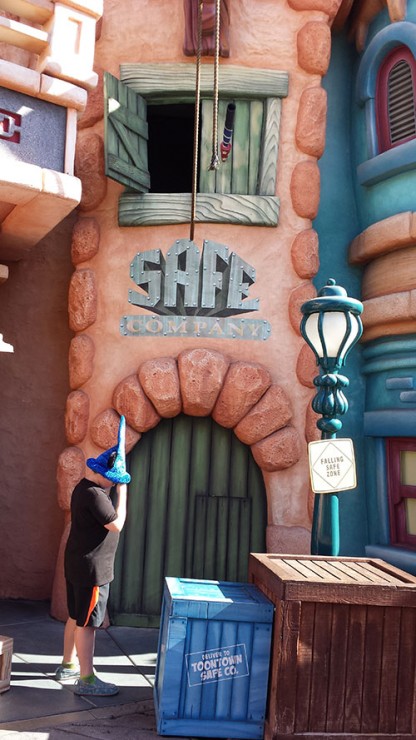 And enjoyed “driving” the fire engine: 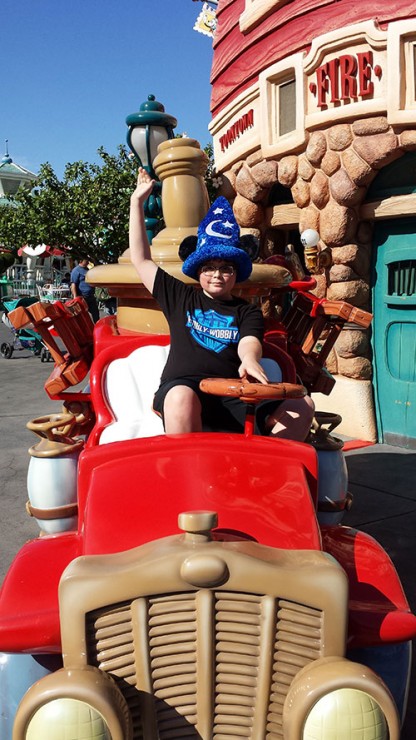 We took the train around to New Orleans Square to have the world’s most awesome sandwich, the Monte Cristo!!!

The highlight of the afternoon rides was “Indiana Jones”, and we headed back to Space Mountain for our last ride of the day. There was a much longer wait at this time than it had been first thing in the morning, but it was cool and we had a nice view that I enjoyed:

However, about 20 minutes into the wait, they closed down the ride “for maintenance”!!!! Nooooooooooooo!!!! Logan was rightfully disappointed, I was just glad we hadn’t waited longer…there were folks way ahead of us that got turned away too!

A trip to the Lego store while waiting for Liam to be done with rehearsal lifted Logan’s spirits, and then…Ice Cream Sundaes for dinner! 🙂

Sunday was concert day. Liam had a rehearsal in the morning, and the concert was in the middle of the day, in the “Grand Ballroom” at the Disneyland Hotel: 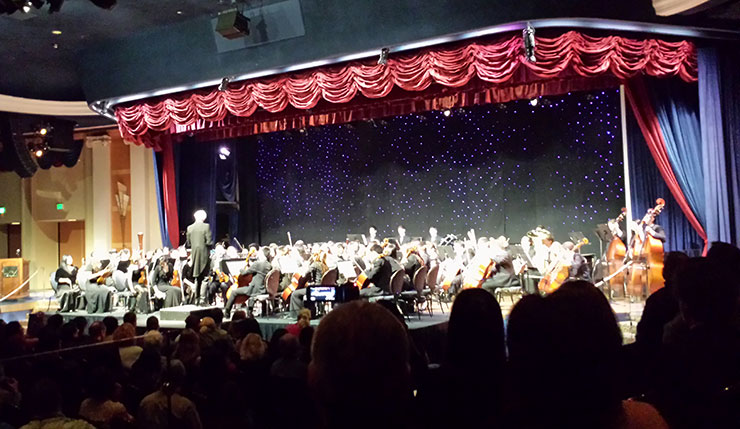 The acoustics in a place like this aren’t great – the room is really “dry” meaning sound doesn’t carry or reverberate around the room. But the orchestra sounded great, Liam was strong, clear, in control and in tune all the way through. He and the rest of the low brass section had to stand at both the end of the Overture (Verdi’s Nabucco) the Symphony (they played the 2nd and 4th movements from Shostokovitch 5), acknowledging all the exposed and difficult passages they had to play.

Liam’s chops were ready for a rest at the end of the concert: 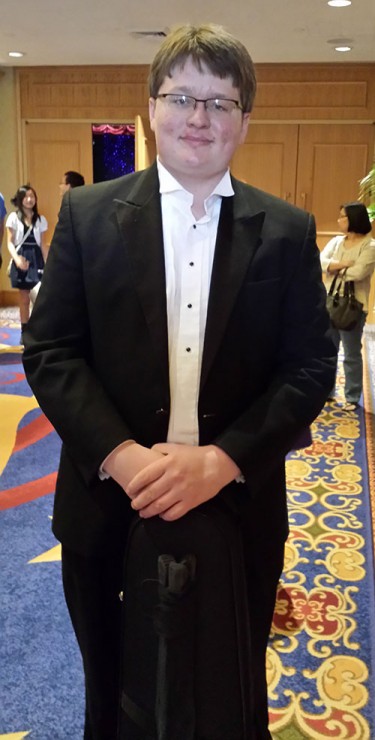 but he found the strength to eat a celebratory lamb burger before we headed home! 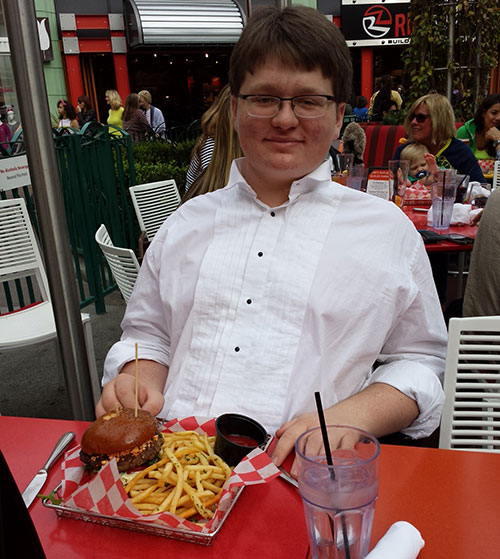 Liam had a great time, not only playing good music, but he got to reconnect with some friends he had from music camp and they had a great time during the breaks. He was so busy he didn’t have time to text me answers to my questions! 😉

Here’s the low brass sections right before the concert started: 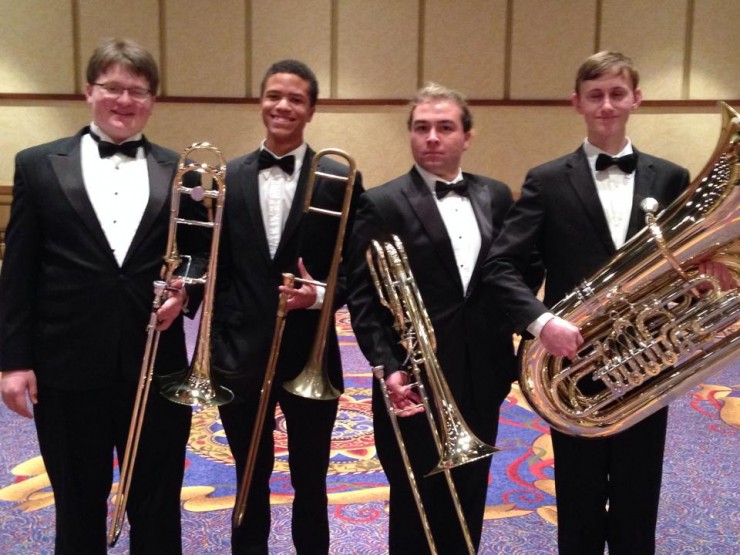 all psyched for some fortissimos!

← Our Refurbished Mission Rocker!
My Hubby is Awesome | Our New Coffee Table →