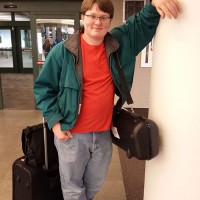 Well, I have been through one of the most intense periods of being a parent in the past week! Liam and I headed east to Nashville Friday the 25th – he was Principal Trombone in the NAfME All National Orchestra and the conference/concert was at the Gaylord Opryland Hotel in Nashville. There was also a Concert Band, Choir, and Jazz Band, with a total of 670 students in the groups. They rehearsed Sunday through Tuesday (while NAfME, National Association for Music Educators, members were doing music education conference things) and the concluding concert was Wednesday morning. We’ve been eagerly anticipating this event since we found out he was principal trombone and that they were going to play the last movement of Mahler’s first symphony, which has got lots of exposed brass parts. Here he is at the start of our trip, looking cool yet excited at the same time! 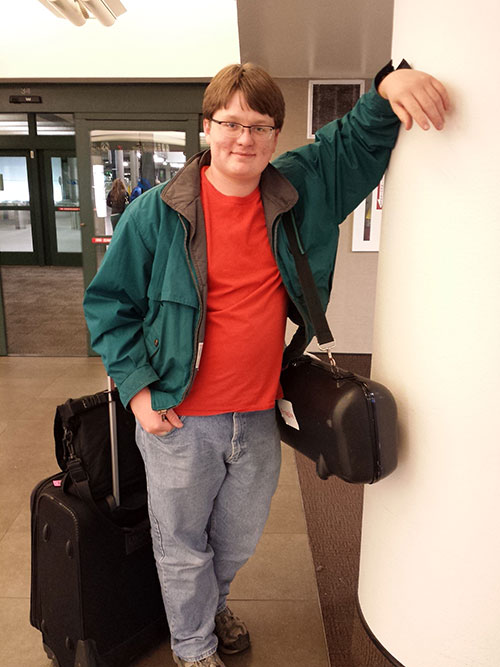 He and I travelled there Friday night, arriving at the hotel close to midnight. If you’ve never heard of this hotel, it’s HUGE! (that’s an understatement). There are 3 huge atriums with massive gardens, many many rooms all spread out everywhere, restaurants, shops, as well as an entire convention center. 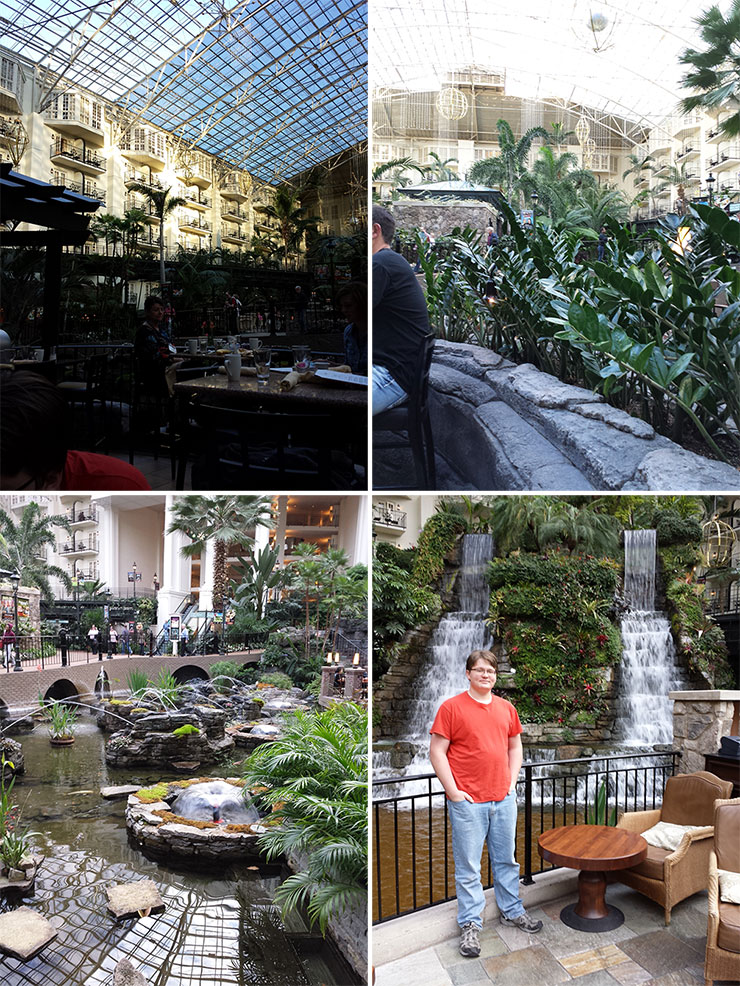 My friends, I could tell you several stories of how overwhelming this place is, but I really don’t want to spend the time. Just know that you can get claustrophobia in someplace this huge if you feel like you can’t find your way out, and that it is truly annoying to have to include at least 30 minutes for a round trip to your room and back, which if you don’t plan for can end up having you wearing jeans and sneakers to a symphony concert.

Anyway, we arrived early so that we could spend the day checking out Vanderbilt University. Although lots of college juniors check out potential college campuses, it isn’t truly essential if you live far away from them. But when you’re planning on majoring in music, it really REALLY is a great idea to take a lesson with your potential teacher before committing to the school. Although this may have to wait until you’re accepted, doing it ahead of time allows you to gauge whether the school is a good fit, and it also lets the teacher know you’re interested, so they can spend some time sizing you up before the big audition day. So since we were going to be in Nashville, and my hubby (a trombone professor himself who was been teaching Liam all these years) has heard good things about the new trombone teacher at the Blair School of Music, which is one of Vanderbilt’s 4 colleges, it made perfect sense to take a campus tour and lesson with Jeremy Wilson.

We spent the morning on an official campus tour and confirmed what we’d heard: Vanderbilt is a beautiful campus and the students have an amazing amount of resources devoted to their success there. 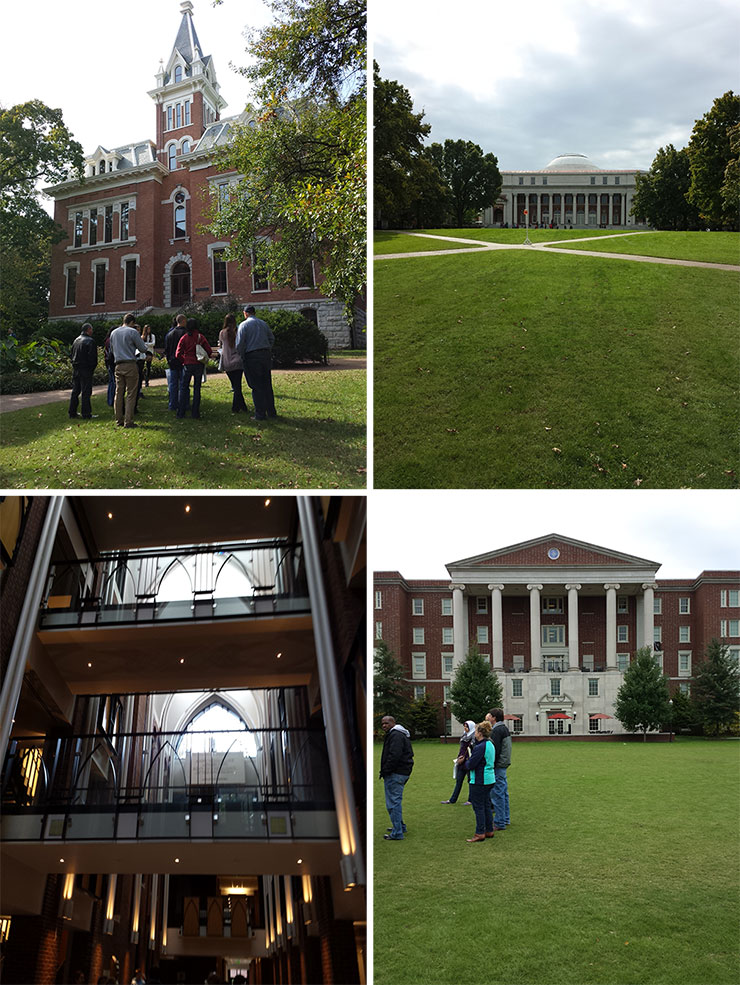 I didn’t get to take lots of pictures, we were too busy taking it all in and traipsing over hill and dale! By the end, we were very happy to have a late lunch at  the Pancake Pantry, which was every bit as awesome as our tour guide told us it would be! 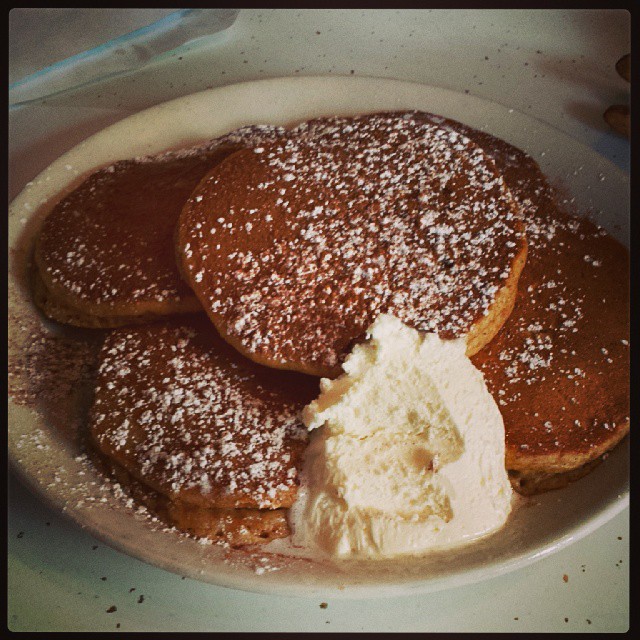 We met up with Liam’s friend Teddy and his Mom, Teddy is the Drum Major in Liam’s marching band and was in the Concert Band, they had taken the red eye because of a football game on Friday night, and they toured the campus while Liam took an almost 2 hour lesson with Jeremy Wilson, the trombone professor at Blair. Blair is at the edge of campus, and situated next to a cool performing arts center 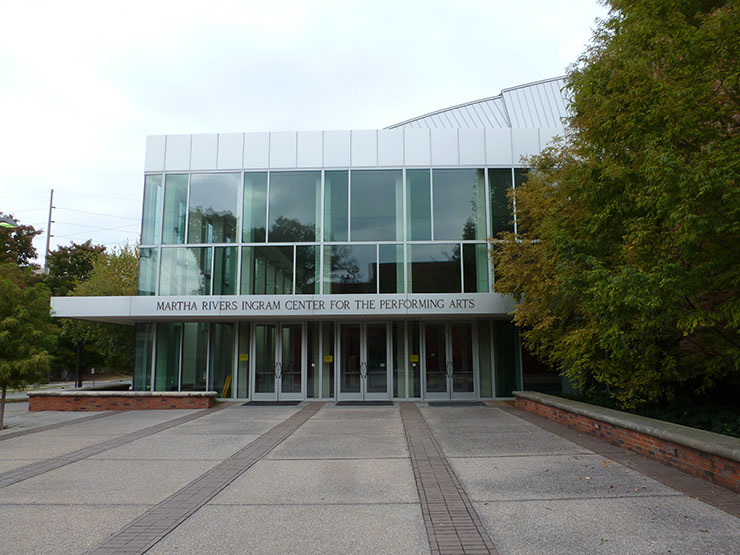 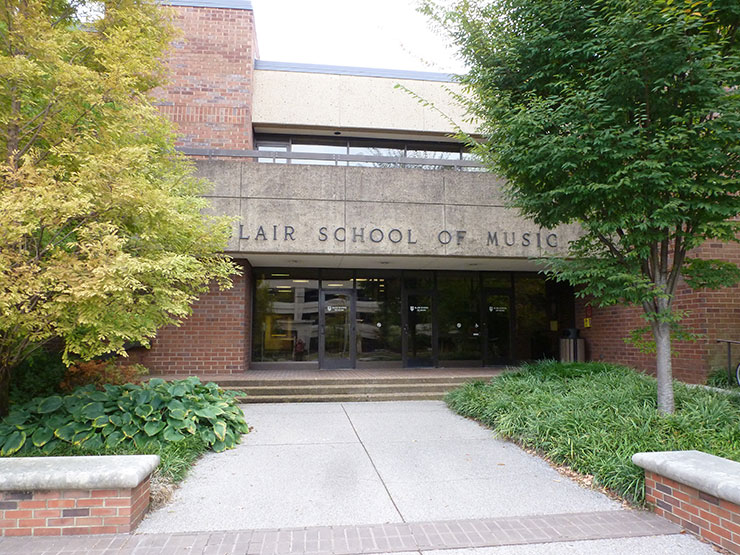 Jeremy invited me inside to listen to the lesson, and I spent that time totally immersed in the moment, truly enjoying watching the 2 of them work together. It was a joyous, intense time for me, seeing Liam be himself and really showing who he was as a musician to this dynamic teacher who really, truly was enjoying the process of working with him. Everything Jeremy was saying to Liam totally jibed with what I was thinking, and have been trying to communicate with Liam, about the music. And the technical stuff re: the trombone playing sounded straightforward, with no “hocus pocus” as my hubby calls certain types of music teaching. At the end of the lesson, we all talked about what it’s like to be a music student at Blair/Vanderbilt, the trombone studio, etc… and it was apparent that Liam would be welcome in the studio. My friends, we’ve all been working towards moments like this for years, and it was truly wonderful to see the two of them work so well together.

You know how so much of your days seem to be the same old thing? Folding laundry, driving to work, etc…., it can all blur together, can’t it? But then there are minutes, hours, or days of something wonderful (a first date, a wedding, when your kids are born) that can really come alive in the moment, and remain clear many years later. This lesson was one of those times for me, and I am thankful that I was there. (I am also extremely thankful that Jeremy recorded the whole lesson and shared the file with Hubby and myself so that he could hear it too!)

But wait! There’s more! We got 2 chances to hear Jeremy play! That night he played with the Nashville symphony, and I was quite impressed with the performance! (I don’t usually think of classical music when I think of Nashville – do you??) The hall is beautiful: 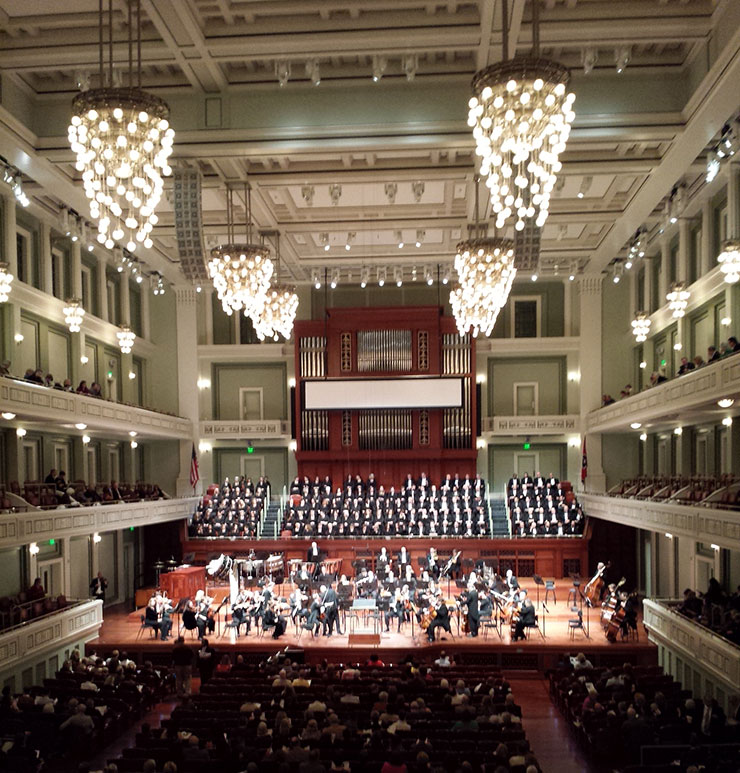 But more importantly, Jeremy was giving a recital the next night. (Shhh, don’t tell any NAfME kids, Liam was excused from the excursion they had planned for the kids after rehearsal so he could go to the recital instead). The recital was an incredible experience, he is an amazing player, with not only incredible techical control of his instrument, but awesome musicality spanning a wide style of compositions. It was truly an exciting concert, and i spent the whole time thinking “If he can teach Liam to develop musicianship like this, Liam will be able to do anything he wants to musically”. Oh, it’s so exciting!!!!!!!!!!

Of course, this was really just the first day (with the recital coming after the first day of orchestra rehearsal for Liam). Sunday Liam was in a room with a HUGE amount of string players (look how far away the conductor is! They had to get her a microphone so the kids in the back could hear her!): 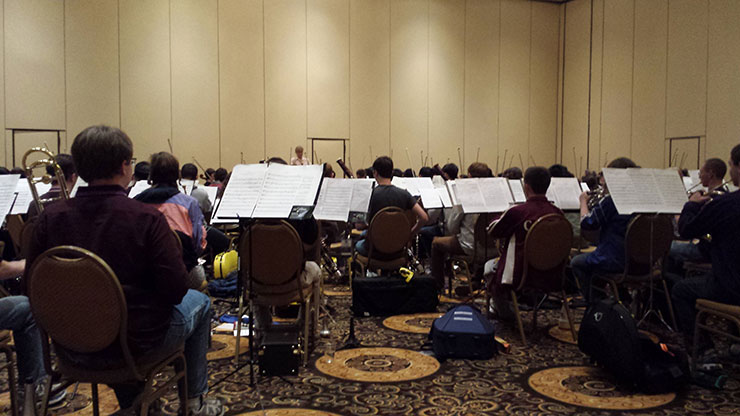 Because I had to check in with the manager about Liam’s release for the recital, I got to spend some time in the first rehearsal, and just wallow in the awesome sound of all these kids just attacking the Mahler with all the gusto and excitement they had! There are some really exciting parts where Liam and the first Trumpet have some important lines an octave apart, they sounded good the first day, but by the concert they were perfectly matched! 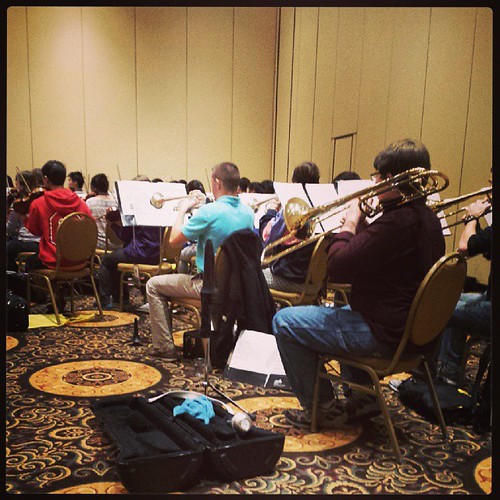 One of the days when the groups were rehearsing, Teddy’s mom and I took a bus tour of Nashville. There was a LOT of random trivia about Country Music Recording Stars that we, or frankly the whole bus full of NAfME parents, did not really care about. But we did see some Nashville history, it is a beautiful city! 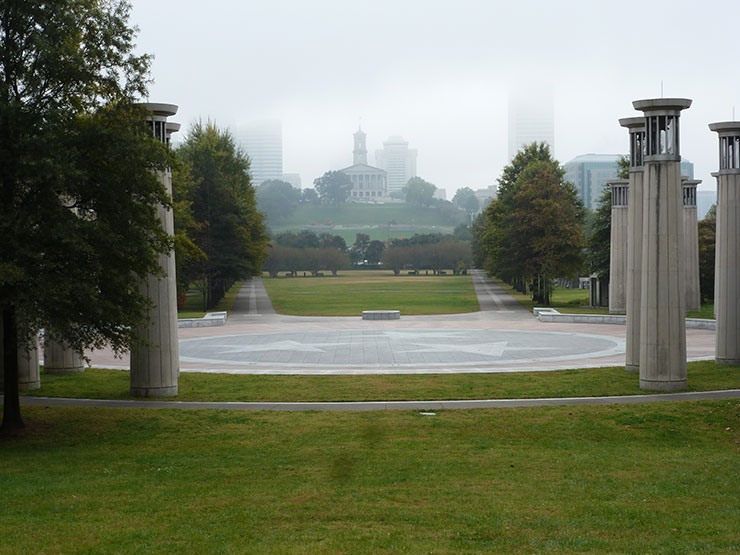 Did you know there was a model of the Parthenon in Nashville? I didn’t! 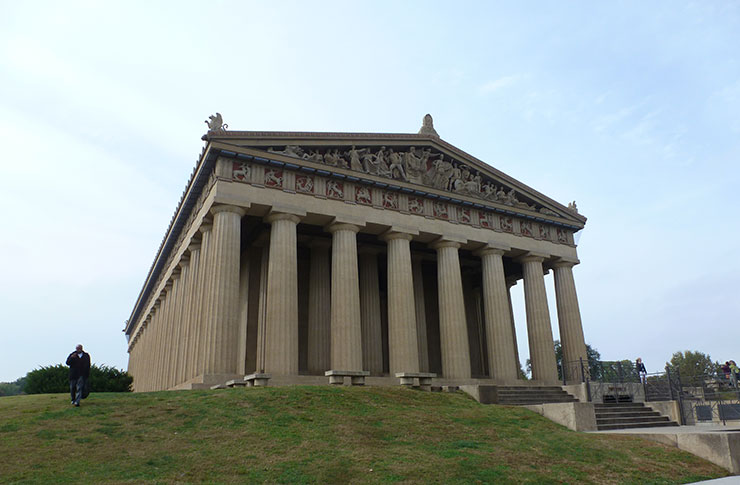 We also got our fill of Southern Plantation History with a tour of Bellemeade: 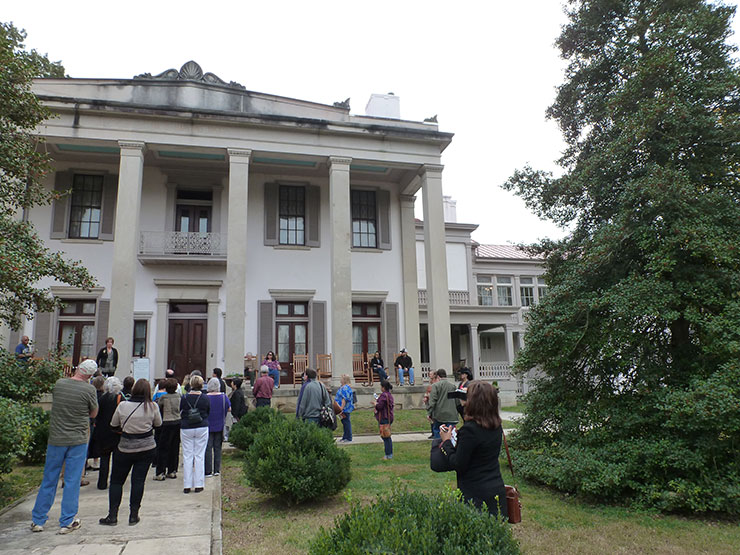 But really, I was just marking time until the concert! The group was huge, there were lots of people in the audience: 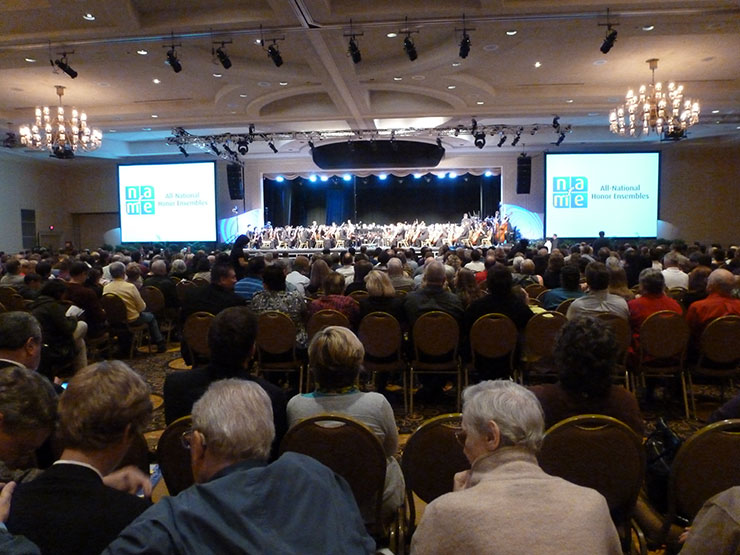 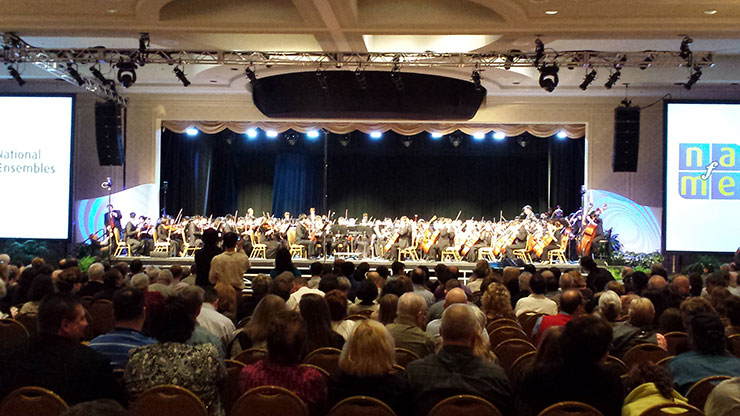 Here he is as the concert ends: 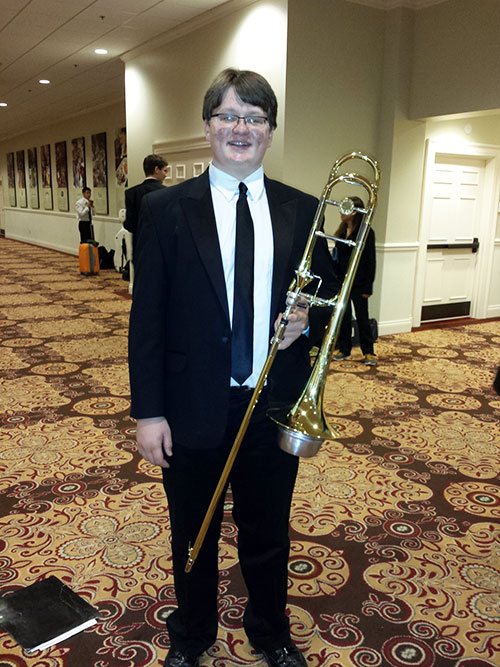 And here he is clowning around with Mr. B., his band director who came along to act as a chaperone, and ended up moving a lot of chairs (they need more stage hands!). Mr. B. is, ahem, vertically challenged, so here he’s on his tip toes, trying to get as tall as Liam: 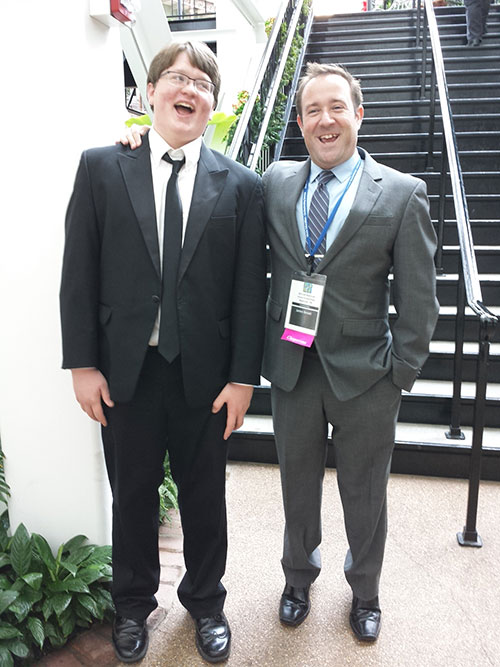 It was a fantastic time, and I am exhausted! It is so rewarding to hear my young man play his best, be a part of an awesome group of talented musicians, and connect with a promising teacher. Really, such an exciting time!

2 Responses to One Moment | Liam is Growing as a Musician