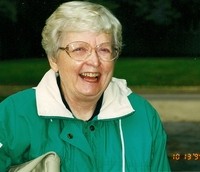 We are very lucky to have such an incredible family. Andrew’s mom passed away yesterday, after suffering from Alzheimer’s for several years. Her husband Dick passed away almost 2 years ago, and I know that his face was a joy to her until the day he died. I do believe that she never really understood that he was gone. 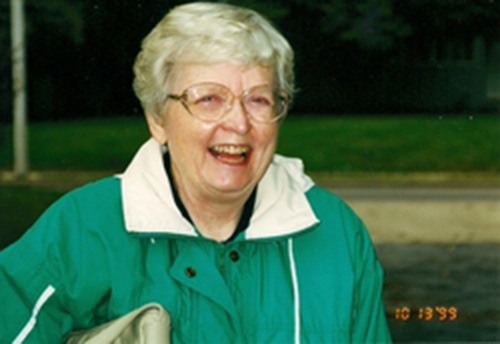 She & Dick had 5 children over a span of many years – Andrew is the youngest and his oldest (and only) sister Ann is 15 years older than he. When he was quite young, Ellen took central Indiana by storm in becoming the first woman elected to the Logansport City Council. She was reelected in 1975 and again in 1979 and also served as council president. Andrew has many MANY memories of going along with her to campaign visits all over the county, eating lots of church dinners and basically soaking up local issues as a politician’s kid. She went on to join the Logansport Utility Services Board and, in the 1980s, ran as a Democratic candidate for the state legislature – it was a tough row to hoe in that very Republican state, and she didn’t make it to the legislature, but she remained active in politics and public service for the rest of her life. She was Precinct 11’s Democratic committeewoman for more than 20 years, registering voters and organizing volunteers to staff the precinct’s polling place.

By the time I knew her, she was finishing up her years and years of service on Utilities Services Board, but even after she retired from that position, she remained very interested in politics, both local and national, until her lucidity was dimmed by the Alzheimer’s. Andrew regales the boys with tales of how things were when he was young, with only 4 TV stations, and Ellen (and Dick when he was home from the hospital) would watch ALL the news broadcasts to make sure she had the clearest picture of what was going on.

Politics were such a big part of her life that they could elicit a response from her when she was hardly here. Andrew has several incredible cousins, his cousin Justine lives about an hour from his hometown and has spent a looooot of time visiting Ellen in the past 2 years. Last Fall, she was in Ellen’s room when volunteers who go around to nursing homes to help those folks vote by absentee ballot. In Justine’s words:

“As the volunteers were explaining the process to her roommate, Aunt Ellen awakened and appeared frustrated. The gentleman of the group asked her roomie if she wanted to vote a straight ticket which meant either all democrat or all republican ticket. At the word democrat, Aunt Ellen’s eyes flew open and she started looking around. Her roomie asked a question about who was on the republican ticket locally…Aunt Ellen literally raised her head off the bed 4″!!! As the conversation returned to who was running for what, Aunt Ellen gave my hand a big squeeze, laid her head down and gave me a tug. I kissed that sweet forehead, tucked her back in and held her hand as she went back to sleep. I now understand a term I have read in not so fine literature; a watery smile. Aunt Ellen reminds us of who she is and her values at the most surprising times and in surprising ways. Not only was I touched by the kindness of others to ensure the right to vote by those who can, but I was overwhelmed by the reaction of a long-time civil servant awakening at a conversation about voting, smiled at her strong tie to the democrat party and teared up at her need to be loved and held. God bless those who make it their life mission to care for others…whether to assist in voting, or taking care of their needs, you are so appreciated and respected for all you do. Thank you from the bottom of my heart.”

We thank Justine from the bottom of our hearts, for the visits and her compassion. I was so happy to hear she was there to witness that small moment.

Ellen was also an avid gardener, with a keen interest in local flowers. For the first 12 years of we were married, Andrew and I lived in the Midwest and we got to visit with Dick & Ellen several times each year. Every one of those visits would involve a tramp around the garden, whether it was their house or ours, to see what was growing and to talk about what needed to be done. She and Andrew would spend many minutes discussing how a tree needed to be pruned – oh, how she hated to see trees poorly pruned, and she always wanted the trees in her yard to look natural.

She was very sensitive to the feelings of the folks around her. Andrew’s Dad was of the type to speak first and think about the effect of his words after, so sometimes he would say something that would hurt my feelings. She always noticed this, would pull him aside, point out the error of his tongue, and smooth things out – this made visits much happier! 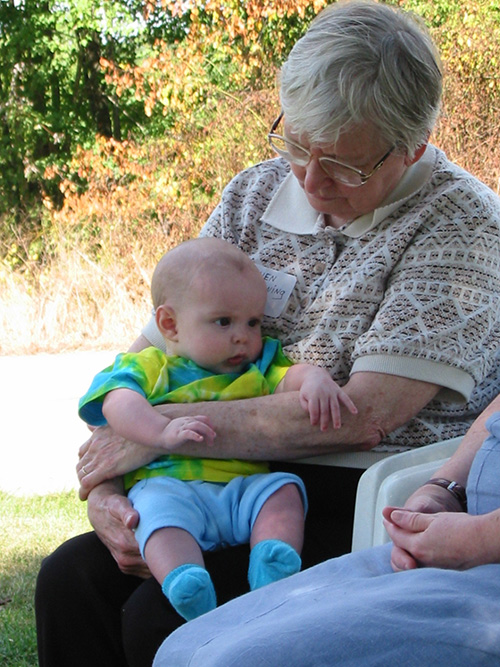 By the time we moved to California, 9 years ago, it was apparent that she could no longer safely travel long distances (for fear of her becoming disoriented in an airport bathroom or something like that), so she never got to visit us in California. I wish she had, as she was born in Berkely and grew up in Pullman, WA and really appreciated West Coast fresh vegetables, something that she would often talk about with Andrew when they were grocery shopping in Indiana in the 70’s, when fresh fruits and vegetables were very hard to come by in the winter! My boys don’t know her very well, but will continue to tell them stories about both their grandparents. And when Logan pulled the very first onion from his very own garden: 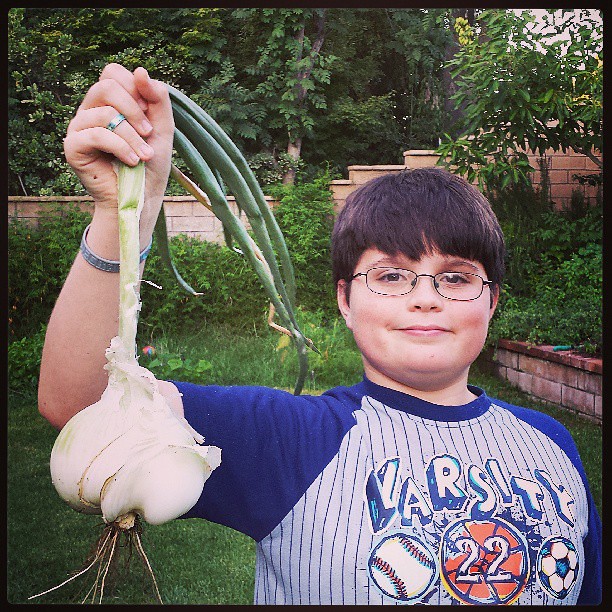 it’s apparent that her love for gardening has been shared with him.

Her niece Justine was at her side often this last week, and was there for her at the very end, for which I am eternally grateful. Although she is sorely missed, I’m glad she’s no longer suffering from this horrible disease.

← Our Kitchen Reno | The Colors!
Another Fun Patio Class →