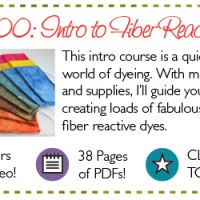 Hooray! Today is the day – Dyeing 100: an Intro to Fiber Reactive Dyes has launched! I have really enjoyed sharing my love of color with lots of folks in Dyeing 101: Controlling Color and Dyeing 102: Controlling Texture. But I felt like I needed a smaller, simpler class for people who wanted to dip their toes into dyeing, so this class was created! 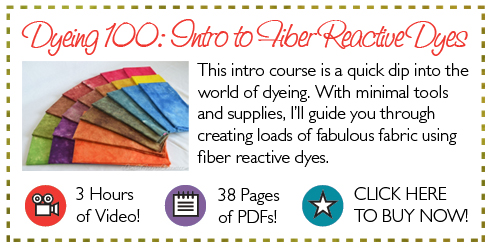 It was a massive amount of work, because it involved a LOT of behind the site shuffling! I have learned a LOT in the past year and a half, and some of that has to do with web design and plugins used to make online classes. Long story short; I had to move the first class I built to a new URL and I now have a central location for information on all my classes. Because not only have I just launched my 3rd class, but I have plans for at least 2 more. And as my classes are self paced and don’t expire, folks who are registered in more than one class needed to have a central place to come (well I don’t know if they needed it, but I sure did! 😉 )

All this rejiggering required some brain power and the ability to keep a lot of things straight all at the same time and I KNEW that I needed help, so I called in the big guns: my Web Guru Mary Weise! And not only did she move one class, re-vamp all navigation, and install the backbone for two more classes, she did some web design tweaking and best of all came up with some super rollover badges! Go take a look at how cool these are! Now, maybe you don’t think this is awesome, but I sure do! Not only the look of them but the function as well, to have that little badge that tells all the important details, and to have them all side by side so you can see what the difference is between the classes is an awesome function, and something that I didn’t think on my own, so yes, Mary is THE BOMB! 🙂

I also (finally) put together a sample class, so folks can have an idea of what it’s like to take an online class from me before they plunk down their hard earned money! If you’re curious, go take a look: Sample session of a Candied Fabrics Online Class

To celebrate the launch of Dyeing 100, I’m having a sale on ALL of my classes: 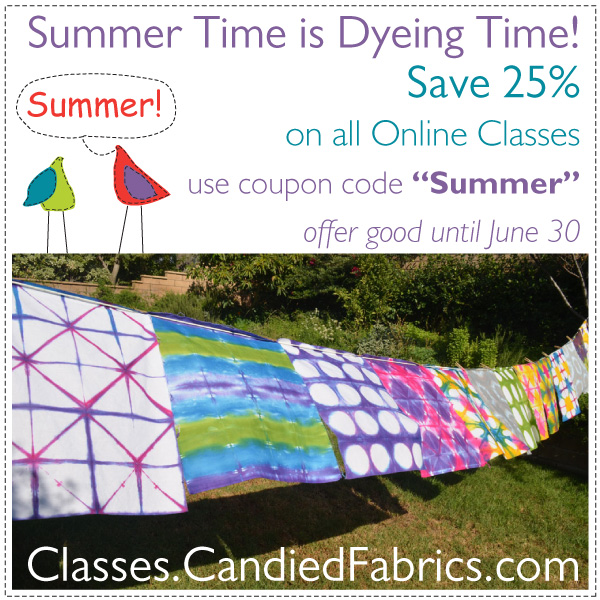 If you’ve though about dyeing, why not give it a whirl?

← June Goals Check-in
One Moment | Liam’s on Another Continent →