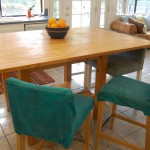 OK, so on top of everything else I’ve been doing this Spring…I’ve also been spending many hours each week consumed with…KITCHEN! When we bought this house in So Cal 9 years ago (right before the real estate bubble burst…), it was pretty darn dated. We’ve been updating it slowly, doing all the work ourselves, when we have the money and hubby has the energy. We’ve now replaced all the yucky brown carpet that went up the stairs and into all the bedrooms (here’s the finished Brazilian Cherry stairs and master bedroom which we just did last summer, bamboo in the boys bedroom and playroom in the Summer of 2010 and bamboo in my studio Christmas of 2008). The last big dated thing to deal with is our kitchen.

To put in perspective how much we’ve done so far vs. how far there is yet to go, here are pictures I took way back when we were house shopping back in 2004. Way back when houses came on the market and sold in a week, and prices were always going up, up, up. Please note – this is NOT my stuff, but it’s the best place to start!

The kitchen is certainly big enough: 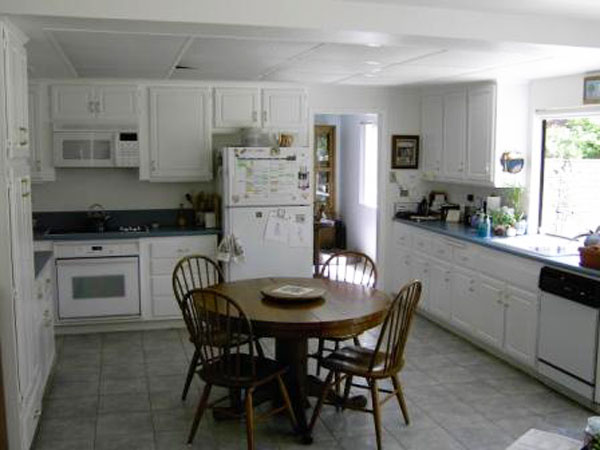 But oh, those BLUE LAMINATE COUNTERS! I’ve hated them since the moment I set eyes on them!!! They are the most hideous shade of 1980’s “Colonial Blue”! ACK! The cupboards are site built, with thermafoil doors from a different era, that although white do not match the white that the cupboards are painted. Oh, and the ceiling lights, aren’t they awesome?? 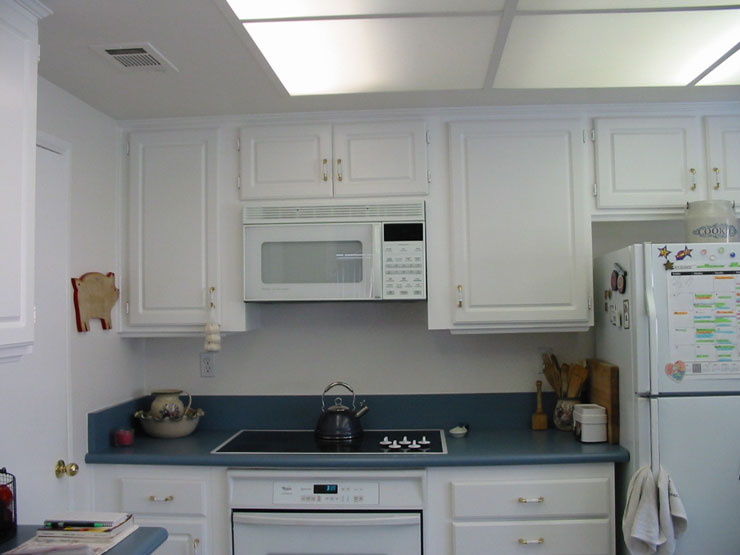 A huge plus is all the windows looking onto the backyard: 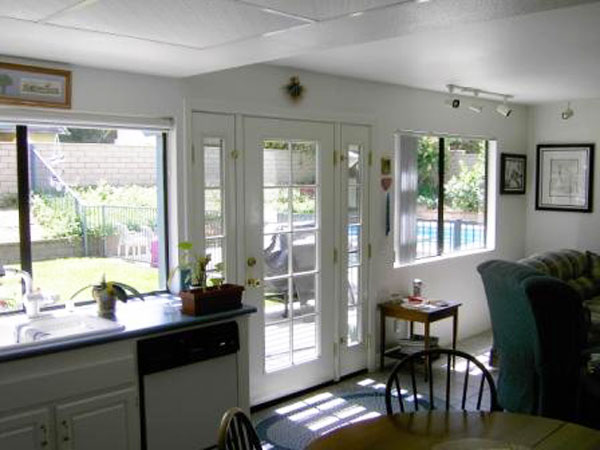 and that it opens up into the family room: 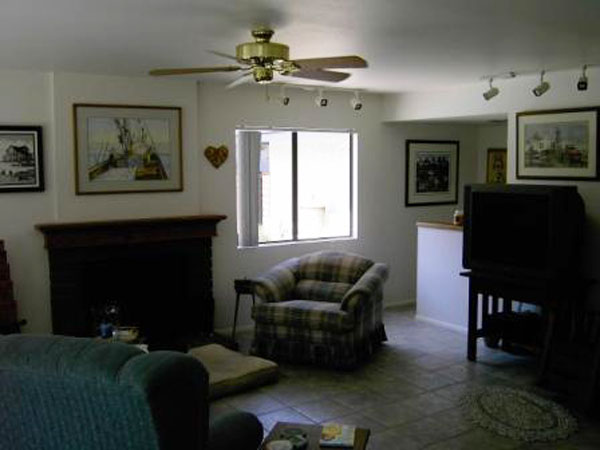 Look past those plaid sofas, you can see all the aging track lighting that was half broken when we moved in and headed downhill in a hurry, plus the “lovely” brass/oak fan. 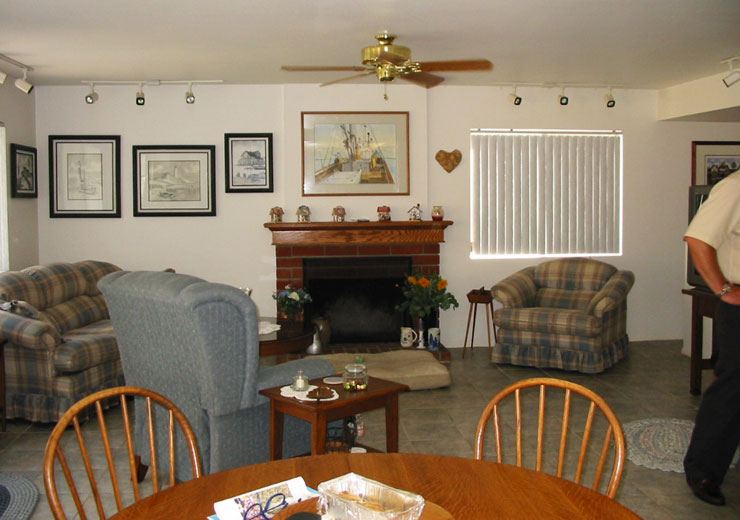 But this house was in a great school district, had a pool and a laundry room – so there you have it, it’s home!

Right after we moved in, we bought the fridge and replaced the leaking weird white faucet, and my old cutting table from my studio in Ohio made a good island: 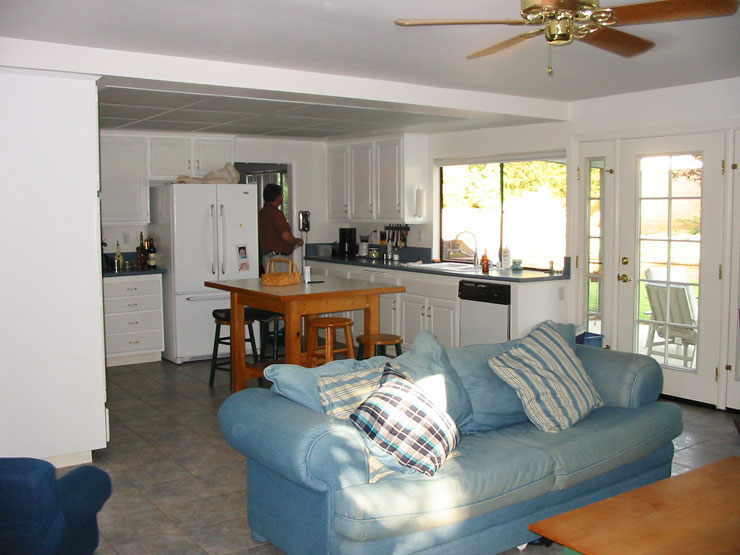 Oh, look at my little Logan! He was so small and cute then, he’s about 2.25 years old here. I remember wanting to take pix to send my Mom after we’d unpacked most of the boxes…he followed me around the house and posed in about every shot! Don’t you love the cowboy boots and pjs? Oh, and notice the missing piece of plastic in the ceiling – there was a leak that kept dripping down into those panels… 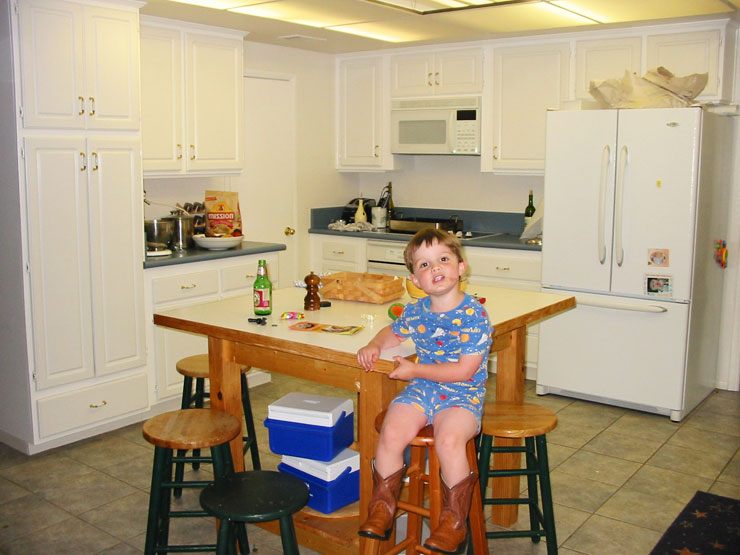 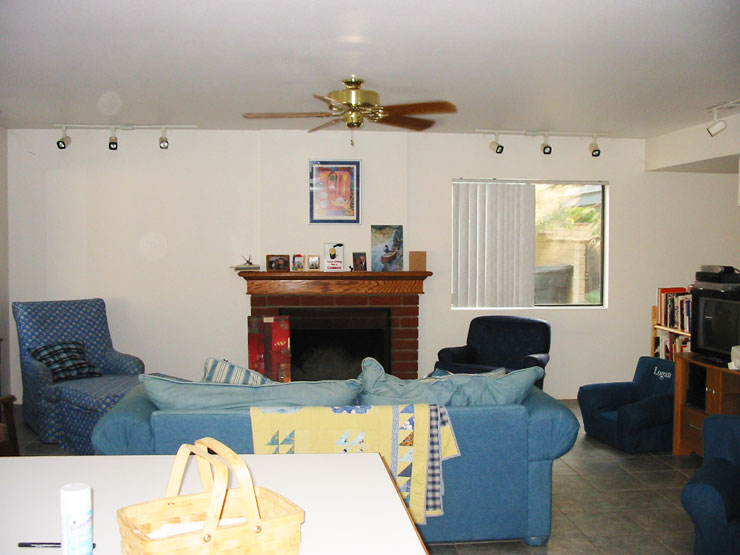 Now…fast forward a few years. I’m sure I have other pictures hidden in the archives, but these were easiest to find. The dishwasher broke (hooray!) and we replaced it with a white Bosch we got a great deal on as a floor sample – no pix of that! I had slipcovered that denim couch up above sometime after we moved in, but in this photos I had just made new pillows for the couch. We’d put a flat screen up above the fireplace, and Andrew had built a bookcase that also stores the stereo and TV boxes to the left of the fireplace. The aging track lighting had been replaced with newer fixtures plugged into some of the old track, and some surface mounted multi-light track-type lights. 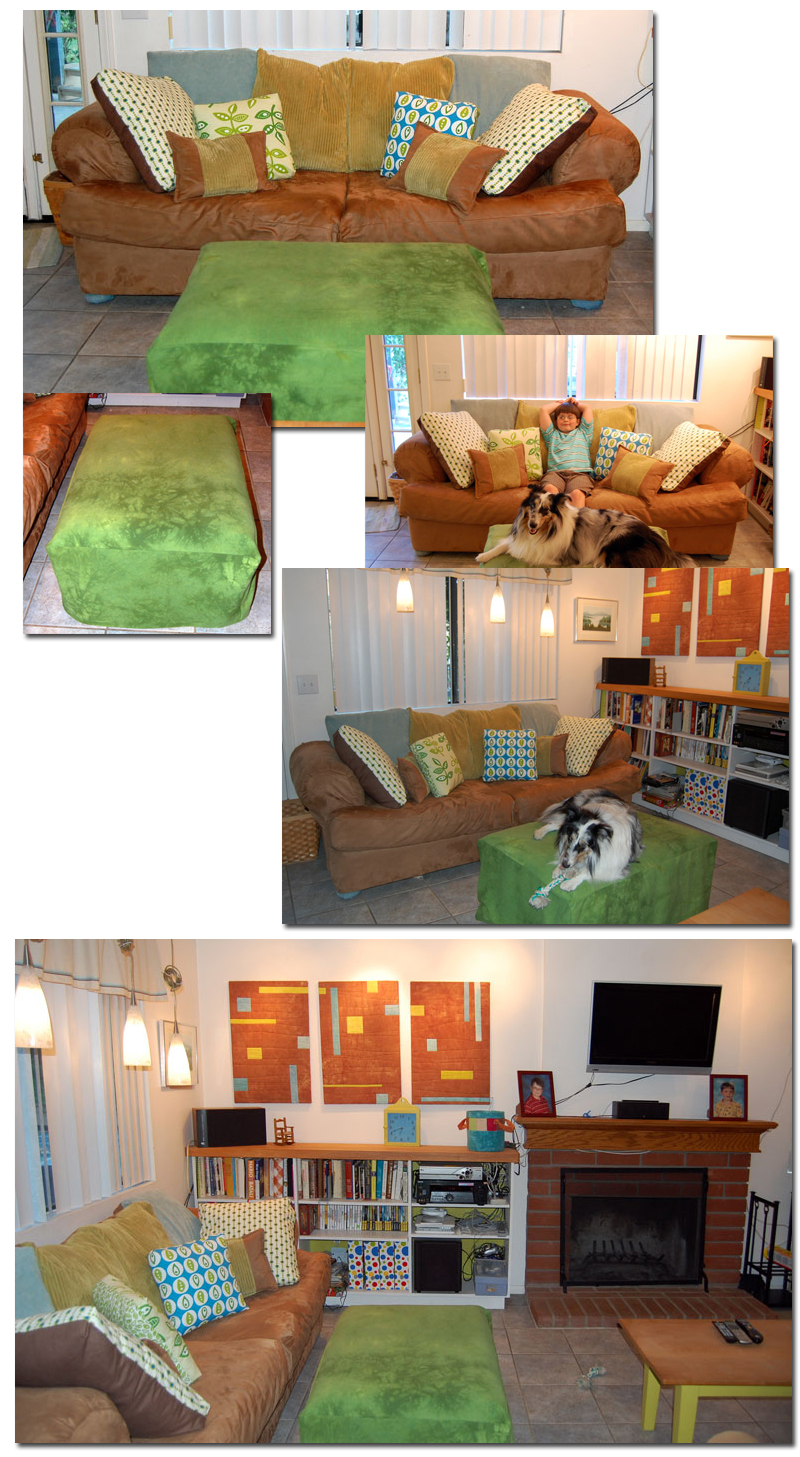 Andrew had also built a desk for the boys to work at (they still use this every day! It helps me keep an eye on them!) Oh my gosh, look how cute and LITTLE they still are!

The island gained a new top way back in the first year we moved in, but here’s a later picture of it. The top is 2 lengths of Ikea beech wood countertop cut down and joined together. I also replaced those dated 80’s pulls with some modern stainless steel pulls, that thanks to the internet I purchased quite reasonably. 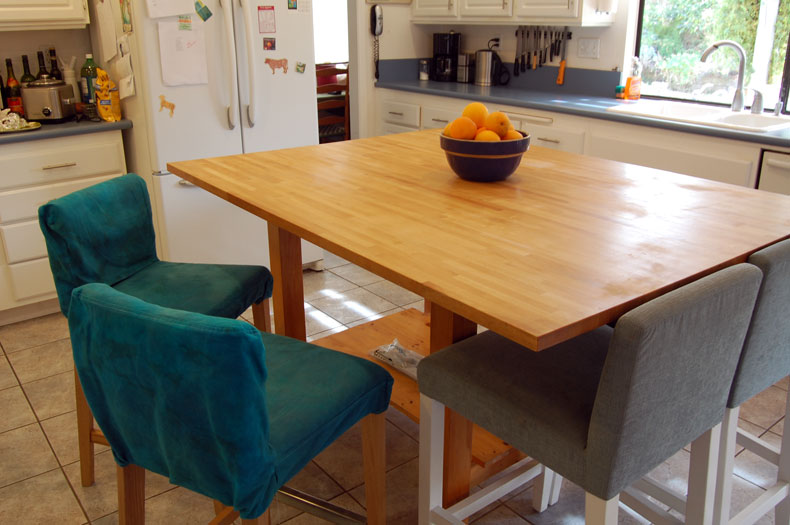 Yup – the slipcovers on those lefthand stools are too big – Ikea changed the size of their stools before I’d purchased a new set of white slipcovers to dye. 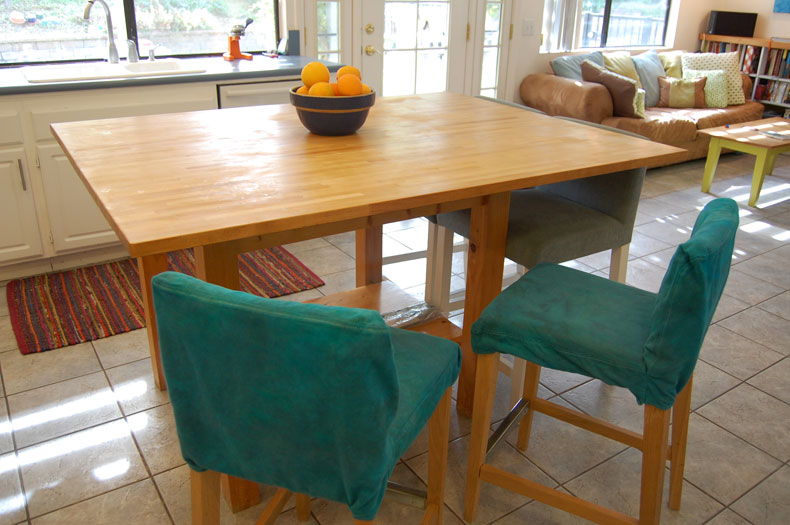 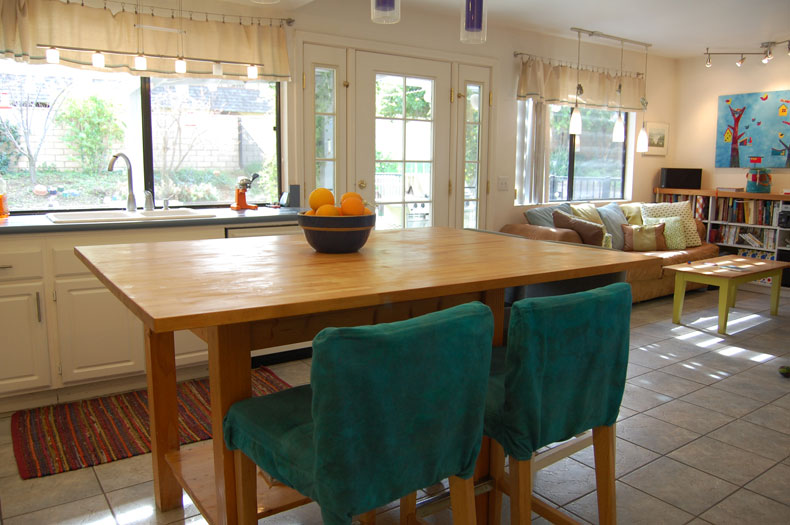 What’s not showing here is that those hideous plastic light panels are gone. The dropped ceiling remains because there’s steel beam holding up the 2nd floor that runs between the kitchen and family room, but now there’s a series of can lights. Getting rid of that dated ceiling really made a huge difference, and if the cabinets weren’t in such bad state, replacing that hideous blue laminate with wooden countertops would have made all the difference in the world. But I want those cabinets gone, so the laminate stays until they go.

Fast forward to April 2013…Hubby and I are in Ikea getting a new storage cupboard for thread, and of course we have to walk through the kitchen section of Ikea. They have a cool stainless steel island with wooden top, and hubby stops to take a look. “What if we did something like this?” he says. “To add more storage…”. We start talking, and talking some more, I start batting my eyes and smiling a lot, and a day later, he tells me to draw up a new kitchen plan with the Ikea kitchen planner so we can see how much it would cost! WooHoo!!!!!

Ok, so that’s enough for now, but I’ll continue blogging about this whole process. Not only do I love the record I have for myself through blogging, but I’ve found so many helpful tips on other folks blogs that I hope that these posts may be helpful to someone else!

3 Responses to The State of our Kitchen/Family Room