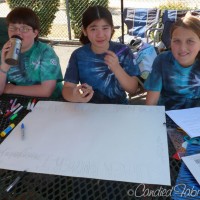 Another busy weekend is over! Saturday was the regional Destination Imagination (DI) regional tournament. If you’re not familiar with this organization (I wasn’t until last Fall), it’s an educational program where student teams solve open-ended Challenges and present their solutions at tournaments. In working to solve the Challenges, the teams learn important life skills like time management, collaboration, conflict resolution, and creative and critical thinking. The teams are groups of up to 7 kids led by one or two adults who are explicitly directed to NOT assist the kids as the research and create the solution to their challenge. The team meets throughout the year and there are 3 levels of tournaments, ending up on a Global level. (Lots more info about the program is here.)

Locally, we’ve got a couple of fantastic parents who’ve been part of this program for several years, and their team has won the Global level in their category for the past two years. Last Fall they came to our middle school to introduce kids and parents to DI and it seemed like the perfect thing for my 11 year old Logan. I ended up being a co-coach with another Mom, and we started with a team of 5. At some point one of the kids dropped out, but the 4 remaining kids really started to gel, but 2 weeks before the tournament we discovered that one of the members of the team was actually going to be in DC on a school trip, so the 3 “Super Duper Imagininjas” re-grouped and were ready to present their challenge solution come tournament time.

Here they are making the team sign at the beginning of the day: 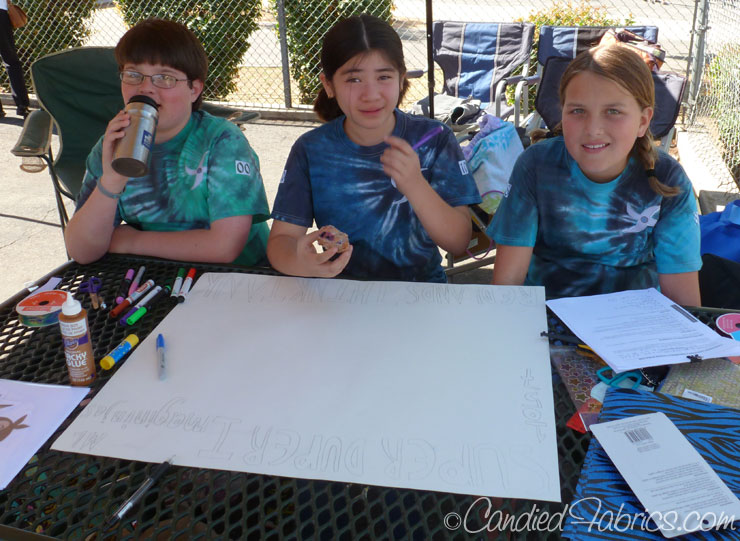 I wish wish wish I’d taken more pictures, and that I’d had someone take a picture of Melissa (the other coach) and I with the kids. They designed and made the shirts themselves: everybody has an offcenter spiral of black + their favorite color. Logan designed a ninja star logo for the front and a big logo for the back that we printed on iron on fabric sheets and ironed on.

And here they being introduced for their main Challenge presentation: 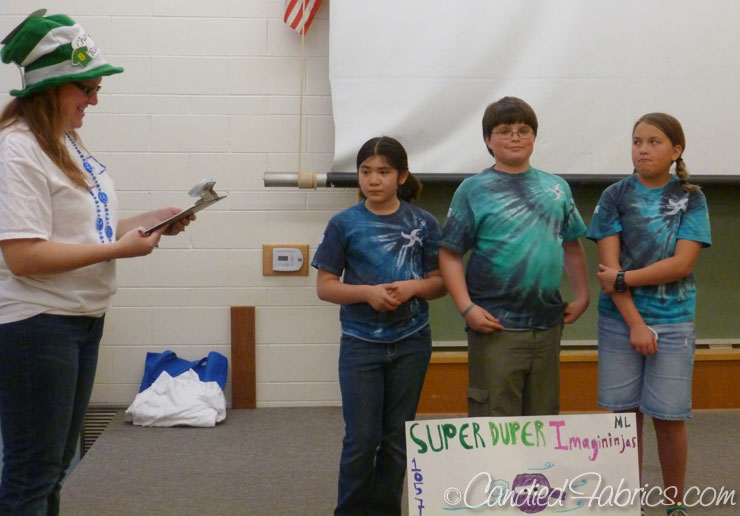 There are several different challenges, each team chooses one and works on solving it for weeks to months. Our team ended up doing an improvisational challenge called “Change in RealiTee”. They enter the room with 8 white tee-shirts, 16 washable markers and a covering for the floor (so they don’t end up with marker on the floor). They are given 5 minutes to come up with a skit (that will be 5 minutes in length) that shows what would happen after a change in reality they are given right then and there (ours was “there are no snow shovels”). They have to design and make costumes and props with the tees and markers to use in the skit, and they must incorporate one of 6 different modes of communication they researched beforehand, that mode being chosen at random right at the start of the challenge (their chosen mode on Saturday: CB radios). And if that isn’t enough to incorporate, at the end of the 5 minutes, one of the appraisers then gives them 3 nouns which they then must come up with a sentence that ties the nouns into the skit, tell the appraisers the sentence at the end of 1 minute and use it in the skit. PHEW! If you think this is confusing…imagine how hard it would be to do if you were 1 of 3 sixth graders! 🙂

Here they are with their costumes on, and their rides – each of them drew an animal to “ride” on so they could have a reason to be using a CB radio (Logan rode a squid!) 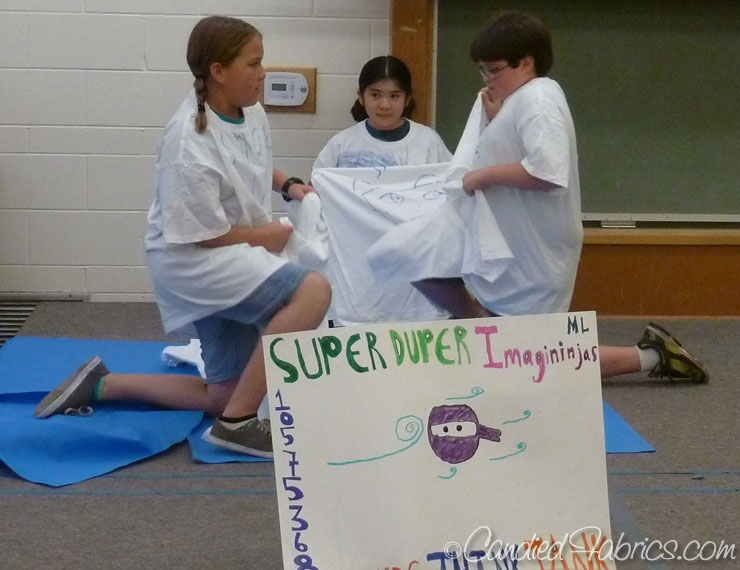 And here’s one of several pictures I have of the three of them riding their mounts and talking about how hard it was because the roads were covered with snow and there were no snow shovels: 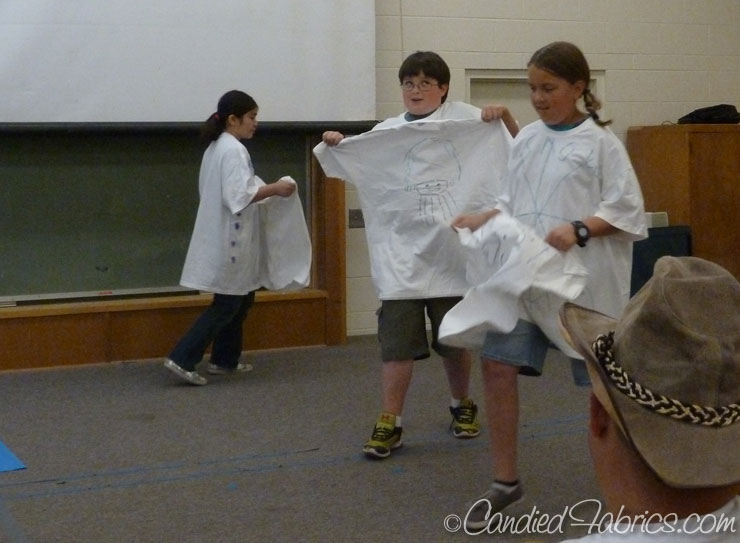 The kids also do an “Instant Challenge”, where you walk into a room and are read your instructions, and then must work together to solve that challenge. I can’t say anything about what they did for this as I believe every group in their age level throughout the whole DI organization has the same Instant Challenge to work on. I was the only one allowed in the room when they solved it, and they did absolutely fantastically at this. At the end, the judges commented on how impressed with how the kids communicated with one another (funny – the kids were too busy talking about their solution to one another to really notice the compliment!) and I have to agree wholeheartedly. There were 2 places in their short planning period where they could have totally gone off the rails, but both times they got back on track.

Melissa and I are so happy and proud at how well our guys did. With several strong personalities and one really shy person, the kids had a real hard time figuring out how to work with one another. They had started gelling as a group of four, and when they lost the boy whose strength was being “Old Man Johnson” in skits (he was hilarious), well, it was a huge blow. Logan has a really hard time being a functional member of a group when he doesn’t get his way, and although I think DI has helped him a bit in this area, he still stormed out of the room at one point in tears the night before the tournament, so he’s got a long way to go in this area. But the day of the tournament each kid did their absolute best. The jitters and nerves were all for Melissa and myself, we had plenty to go around.

The kids scored well, especially in the instant challenge, but didn’t earn enough to advance to the State levels. Melissa and I are frankly relieved, but the kids were disappointed.   Logan had a few tearful moments, but he was able to hold it together. And somehow, by the time we made it home at the end of a long day, with a looooong LOUD awards ceremony, we had cheered Logan up enough for him to spend the rest of the night being extremely happy and telling both Andrew and I we were the best parents in the world several times.  🙂

This day was full of moments to remember, but I think that moment at the end of their Instant Challenge was my favorite…they really did an incredible job of communicating with each other and presenting an entertaining solution, they did their absolute best when they needed to the most, hooray!

2 Responses to One Moment | Destination Imagination