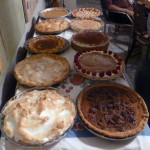 Well, the Festival of Pie (what we call Thanksgiving, because we have so much PIE!) was a rousing success! Actually, this was quite possible our best Thanksgiving EVER! We had lots of friends on hand, and my cousin Jessica, whom I haven’t seen since she was a flower girl at our wedding like 20 years ago, and her hubby Jim were in attendance as well! They moved to LA this summer – she’s just got a job in English Composition at USC (she’s just finished her doctorate) and her hubby Jim is in entertainment – he’s a host of the pre-show for “The X-factor” (he used to something similar for MTV on the East Coast. We finally connected and had a great time catching up and getting to know Jim. Of course, I barely took any pictures, there in the bottom right of this shot: 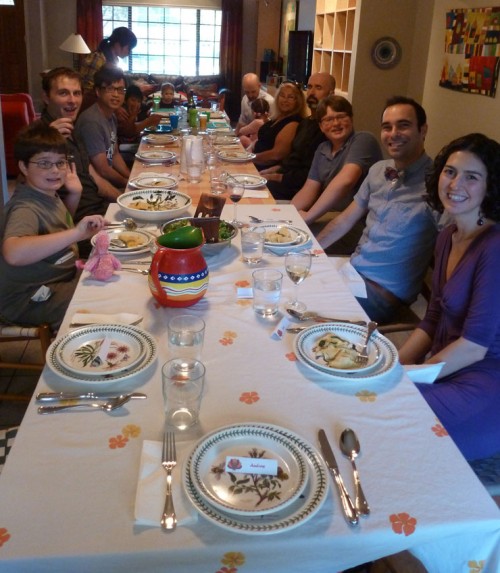 Wow, I didn’t see it while visiting, but in that picture I can see a lot of my Uncle Tom in her! 🙂 We had to add 2 conference tables to have a place for everyone to sit!

The turkey was the BEST ever (Andrew made a “corduroy road” of veggies and herbs for the turkey to sit on while roasting), and he made a gazillion different veggie side dishes, all of which were delicious…except for the roasted brussel sprouts…they got incinerated, because he was roasting them on the outside grill and he needed to come in and help with a squash ravioli disaster. (Note to self, make them just before cooking, and DON’T stack them! Single layer only on lots of floured wax paper.) ( Note to self – need bigger kitchen.) They started out looking awesome… 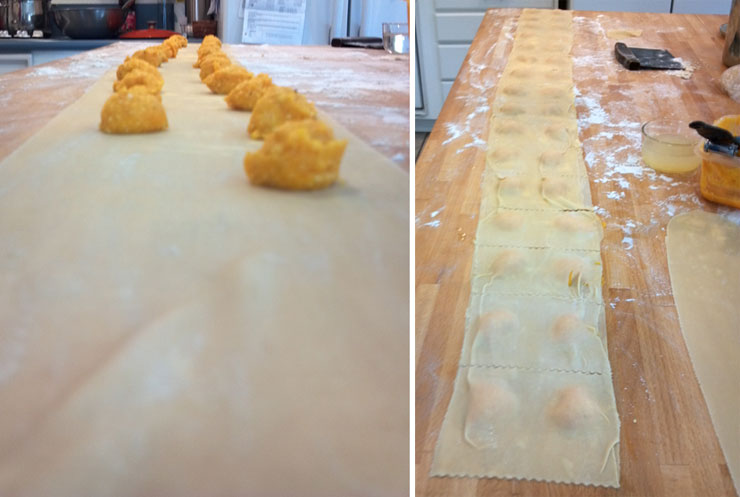 Anyway, it was an awesome meal…And the pies…oh the pies: 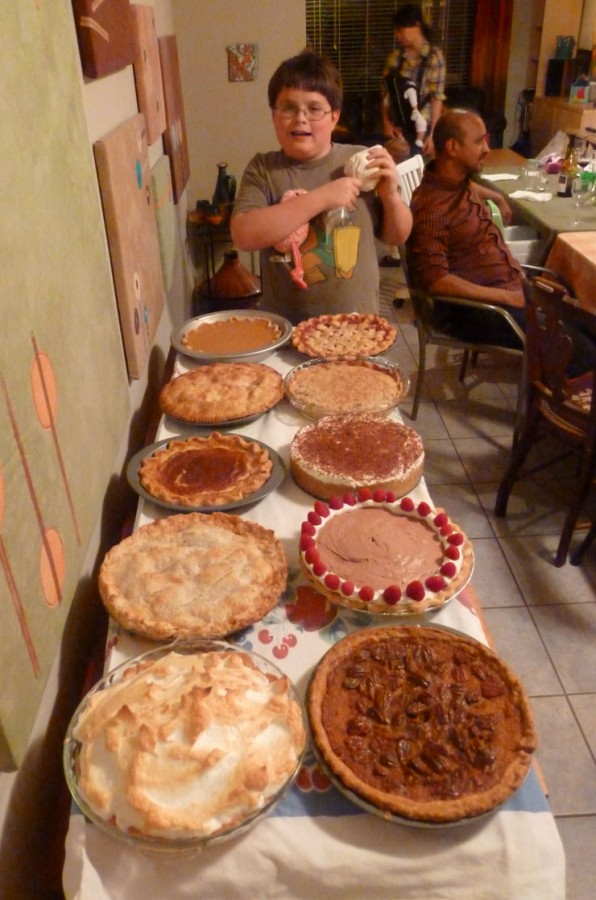 They were tremendous! My family made 7 (well, 9, but 2 were duplicates…) and the guests brought another four, for a total of 11! Jim was overjoyed with the plethora of pies and Instagrammed them all, one at a time…his followers were quite hungry! Here’s the breakdown of what we had: 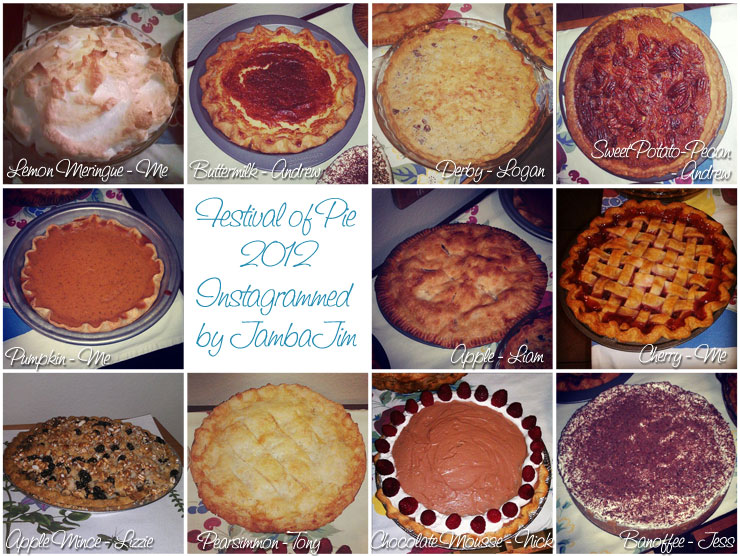 Were there leftoevers? You betcha! Everybody went home with a pie tin that looked like this: 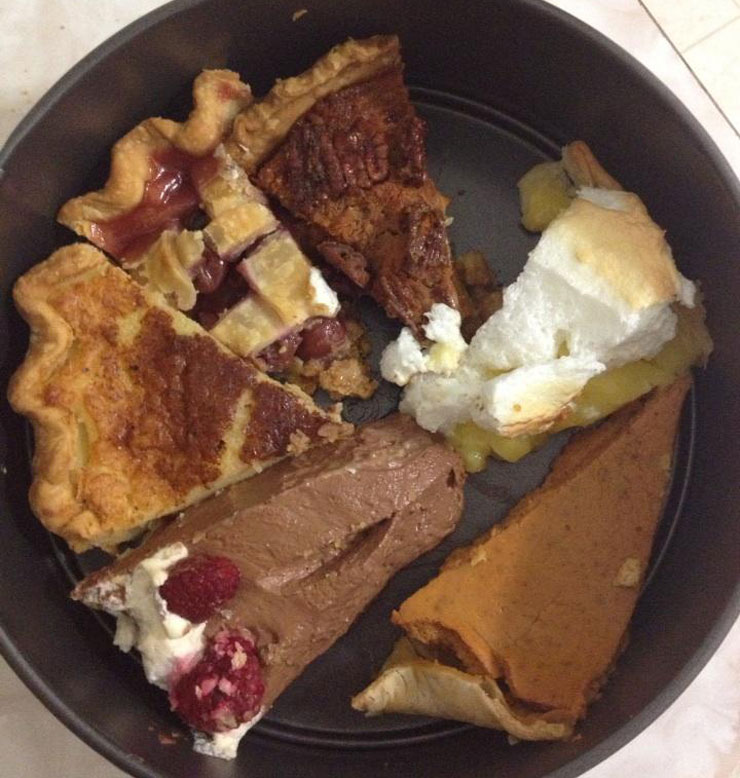 And my boys still had plenty to eat for breakfast, etc…the next few days! I believe we’re down to about a half an apple…

Anyway, I hope that if you celebrated Thanksgiving, that your meal was as festive as ours!

I’ve spent the last couple of days working on some pillows – look at this luscious pile of it here: 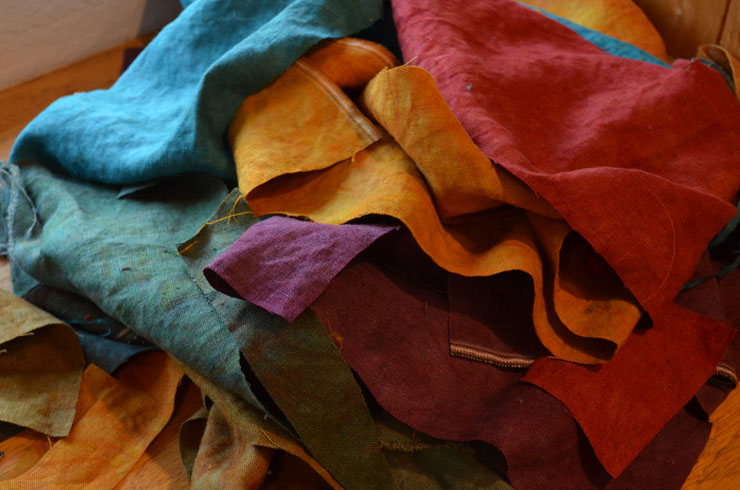 ← Let the Cooking and Baking Commence!
Shopping Handmade for the Holidays! →