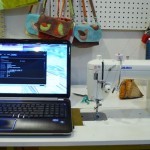 I’ve referred to my computer woes a few times in the past month, and now that my tale of woe has come to a sad end, I thought I’d share it with folks. It’s part cautionary tale, and partly I’m hoping to encourage other folks who end up having the same issue with this laptop persevere with the absolutely horrendous first level of HP customer support system until the issue gets logged with quality control, because if enough people report this, then HP may address the the situation.

First off, this laptop is awesome. It’s an HP Pavilion dv7, and I searched for awhile to find this, trying to get the most up to date computer I could, without breaking the bank. It’s got a huge 17.3″ screen, awesome speakers, a fast processor (2nd gen i7 @2.00 GHz), 750 GB hard drive and 6 MB of RAM. Is it big? Heck yeah! Here it is next to my Juki: 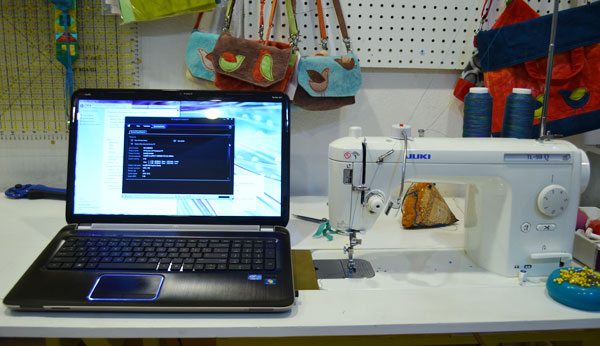 Does it run better than my desktop? Yup! It’s who I depend upon for rendering videos for my online classes (this process is a huge memory hog!) But most important, I bought this so I could do real work sitting on my chaise next my hubby at night, rather than be chained to my desktop in the sewing room.

See why I’d rather be downstairs? I love this room!

Here’s the lowdown on the sadness around this awesome laptop:

So, here’s what I have to say to people looking for a new laptop:

If there’s an issue with it, you will get someone like Meka on the phone and she will piss you off, not give you any way to do anything except pay their God-awful high repair cost. It’s sad, because I really like the look and feel of their products…until a part falls off and I get scratched.

To the people who say I should just buy a Mac:

I have a lot of money invested in high-performance software for a PC and can’t afford to replace it. Yeah, I know, I can run a Mac as a PC – tried that, it’s not all peaches and cream. But most importantly, I like things the way I like them. A PC lets me customize file locations and all sorts of other things that I can’t do easily on a Mac. So, I am not buying a Mac.

To people who may end up here because they had this same issue:

Follow and Tweet to @HPSupport for help. Hopefully they will get in contact with you and you can end up reporting this to someone who can actually get your issue reported to quality control. If enough of us do this, maybe they’ll do something about the issue (besides giving you the offer of 25% off a $270 repair bill).