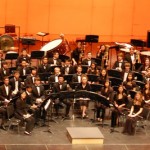 Our son Liam has been growing as a trombone player, and really beginning to blossom as a musician. He auditioned for the California All State Band last December (by sending in a CD) and found out in early January that he’d made it! But which band?

California, being such a big state, has enough really talented kids for 3 wind bands, a full orchestra, a couple of choirs, some jazz bands, the full Monty! For the wind bands, there is definitely a hierarchy, with the “wind symphony” at the top, where there are only a couple of players for each part, and they usually get the “top bill” conductor. Each group below gets a bit larger and tackles slightly less challenging music. To keep the students practicing hard they have “behind the screen” auditions at the beginning of the conference. So I’ve been hounding him to practice his scales (they had to be ready to play all 12 major and melodic minors) for two months now! I wanted him at the top of his game so he could be placed in the group that was the right fit for him, and I really REALLY hoped that this group was not the largest band.

So last Thursday I got to be a nervous wreck, waiting, waiting, waiting to hear how he had done. (Andrew had of course the luckier job of driving him the 4.5 hours to Fresno, getting him registered, and then turning around and driving home again). Well, I was happy happy happy to get a call from Liam late Thursday night: He has placed 3rd chair in the very top group! As a freshman trombone player, this is a big deal!  HUGE! WAHOOOOOOOOOOOO!!!!!

Logan, Andrew and I piled in the truck last Saturday and drove up to exciting Fresno. (Um, not! The best thing about that area is that Selma is the raisin capital) The concert was Sunday morning, and I’m happy to report that they sounded GREAT!

There he is! All the other trombones were either Juniors or Seniors. The trip back was quite eventful…Liam’s band director hitched a ride back with us and got to sit next to our little chatterbox Logan. But a fun time was had by all!

2 Responses to One Moment | One Proud Mama!