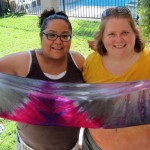 Well, I had such a fun day on Sunday! I gave a private dyeing lesson to Laine, a quilter who’s done some indigo dyeing before, and her friend Nina who is new to the world of fabric in general, and had never given any thought to fabric dyeing before. They arrived at my house Sunday morning, and they wanted to dye some silk scarves for themselves. I had them look at examples of my scarves; Laine fell in love with the black orchid and kelp color palettes, while Nina really like aspects of both moonlit moth and black orchid and so we decided to combine them!

I also had Laine dye some cotton fabric with the same colors so that she could see the similarities and differences with dyeing silk and cotton:

We had some lunch, and then I had them create color wheels while the fabric was batching, and then we washed the fabric out. Their glee was such a reward! They were so excited with what that had created – ah, the magic of dyeing!