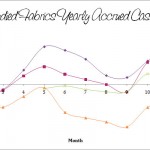 Well, I spent the weekend sniffling, sneezing, coughing and…doing my taxes! The first year that I actually ran Candied Fabrics as a real business, I had a real tax guy do my taxes, but when he moved out of town, I thought I’d try to do it myself, and By George, with the help of Turbo Tax Online it really isn’t that tough!

Many folks I know swear by Outright, and if I had things to do over, I’d maybe use them myself. But by the time I realized that Candied Fabrics as a business was something for the long haul, I had a system in place that was working for me, and the time it would take to do over was overwhelming, and as I’ve been trying to simplify and focus, I didn’t feel like moving to a different way of bookkeeping was a useful way to spend my time!

What I do throughout the year is I keep a spreadsheet that is basically a running total of all money coming in and going out – what’s known as cash flow! I record:

If it’s money coming in, it’s positive…and if it’s going out, it’s negative! I try to enter expenses as they happen, because I really like to know how I’m doing money wise. I know that somewtimes I’m going to go in the negative, usually when I’m buying lots and lots of scarf blanks, but then I’ll have a show, make a bunch of money and get it back in the positive again!

The categories began as my own, trying to make sense of what I was buying. But after working through Turbo Tax and figuring out where all my expenses belong in my Schedule C, I use those categories (I know, genius, right?) When I’m entering a new type of expense and I don’t know how to categorize it, I just put a ? next to it and figure it out when doing my taxes!

The new way I’ve started looking at my data is comparing where I am year to year: 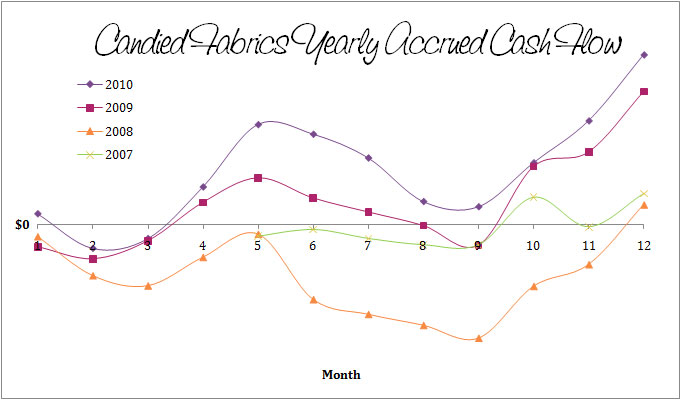 This graph tracks where I am month to month, with each year a differnt color. You can see that I spent most of 2008 in the red – this was the year that I invested in my Juki. The other neat thing is to see that I get 2 peaks, one in May, and then another at the end of the year, after the big fall shows and all the Christmas orders.

Although I’d rather not share the actual numbers here, I thought you may be interested in seeing my gradual progression, and what I’m excited about, that each year I’m doing a bit better!

← One Moment | Listening to Myself
A Commission for 96 Scarves! →