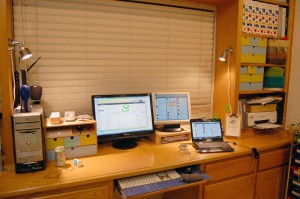 I love twitter! While I’m up in my sewing room working away, it keeps me company! I even have an old, little, monitor where I keep track of facebook and twitter (using Seesmic to organize them). Please note, I don’t usually have my wee notebook on the desk too, it’s just my desk is not very clean today, so why not recycle a picture from a previous post?

Anyway…Hubby & I lived in Kentucky for 6 years, and always love a reason to try new recipes. This past Saturday was Derby Day, so we thought we’d have some folks over to celebrate. (Please note: we actually didn’t watch the race – its was on way too early out here in CA…) Andrew has made mint juleps before (the official Derby drink) but we never have tackled 2 other unique Louisville dishes: hot brown sandwiches and Derby Pie. So I tweeted about this a couple of times on Saturday, and Lindy, from Crafted by Lindy, thought I had written “dirty pie” and was confused (we’ll forgive her, she’s a new Mom and probably a bit bleary eyed) and alamode stuff Linda had never heard of Derby pie and requested I blog about it….so here it is!

Derby Pie is actually a trademarked, super secret recipe, made by the Kern Family at an inn just outside of Louisville, KY in the 1950’s. But a bit of googling took me to several recipes that were very similar, but I chose to go to the Pioneer Woman’s blog to look for a recipe (cause I love her photos so much). Although Ree herself hasn’t yet blogged about Derby pie (which SHE would have to call Kentucky Chocolate Nut pie or some such thing, or the Kern folks would sue her!) there was a recipe in her Tasty Kitchen section. I followed this recipe to the letter, except I added a dash of bourbon…cause what’s a KY pie without bourbon? I made two, and it’s a darn good thing…they both totally disappeared – everybody LOVED it! It tastes kinda like a chocolate chip cookie, except it’s pie…moist and deelicious.

So here’s the only picture I was able to get of one of them before they both disappeared: 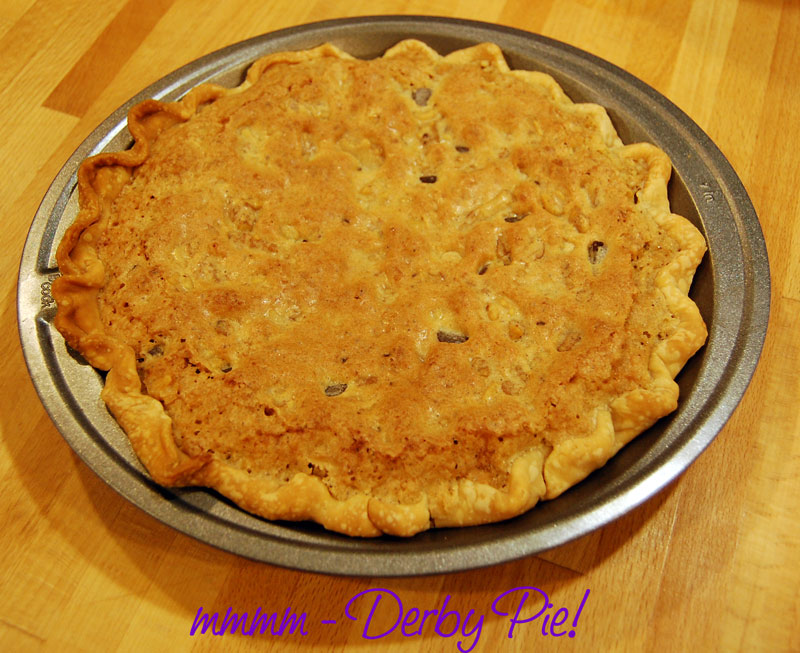 ← May Goals Meetup
Maker’s Must: Cyn from River Dog Prints →