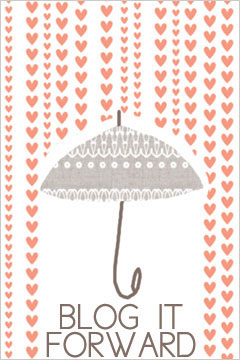 I wanted to share with y’all a cool sounding “mash-up” San Francisco Girl by the Bay is putting together, called Blog it Forward.

The idea is to share a connected stream of blogger posts on “what inspires us the most” on our individual blogs, but link back & forward to the other blogs participating, a bit like a chain letter (but, as Victoria says, hopefully a lot less annoying!).  Click on the image or the link above to learn more about it.

As you may know, I find inspiration endlessly fascinating, so I’m in! She’s had 300 bloggers sign up and had to close it there. I can’t wait to see how this progresses. There are so many blogs out there, I’ll never have time to see them all, but this is a great way to take a look at some new blogs! I’ll keep you updated as it goes live next Wednesday.

Interesting note: Twitter is forever! I had a little glitch on my website this week (resulting in this post on Blog it Forward being deleted very soon after I published it, so you RSS readers may wonder why I’m re-publishing this – it’s because it was gone). ANYWAY, I was having a private “direct message” conversation on Twitter about said problem, and she said something that so surprised me that I typed a phrase containing an expletive I try not to use in public, FORGETTING to add the “d” that makes it a private message. Within 10 seconds I’d had a reply from someone else about said phrase, and I’d deleted the tweet 10 seconds later. “Phew” I thought, that was close! hah! Not so much! There are little bots that troll twitter just waiting to retweet certain phrases (there’s a cute one that tweets you back whenever you tweet “note to self”). This other bot I do NOT think is cute, but what’re you gonna do? Twittter is a stream, the expletive soon disappeared, and I’m pretty sure that everyone on twitter has heard said expletive before (it was the dreaded F-dash-dash-dash) 😉

← What does art mean in your life?
Another Commission Messenger Bag Complete! →

2 Responses to Blog it Forward Mashup