The actual quote, attributed to Edison is:

This weekend I was working on a commission art quilt with a firm deadline (it’s an anniversary gift, and the anniversary is tomorrow). I had a very firm idea in my mind of what the piece would look like. The commissioner (Steve) and I had discussed all this before Christmas: it was to be an arrangement of several botanical sketches to suggest a window…his wife (Lillian) has a windowless office, and he wanted to give her a window.

Lillian works at my University, and she and Steve came by my booth at my very 1st Art for Heaven’s sake show, back in 2007. A quilt hanging in the center of the booth had a really neat backing fabric on it that they were very taken by. Way back in 2007 they had talked about someday having me make a quilt for her office, and as I had another large piece of the backing fabric (a dark forest green with awesome blue & white veins running through it), in my mind it became “Lillian’s Fabric”.

Lillian and Steve like to give gifts, and it turns out that they love to give my hand dyed scarves as gifts, and the gift receivers like getting the scarves, a win win win situation! Several times now Lillian has joyfully played with selected several different scarves, enjoying finding JUST the right color combination for the right person. Of course, she looks fabulous herself in scarves, and can easily twine them around her neck with a certain flair.

So, when Steve approached me about this commission, these were my thoughts:

I shared my idea of a larger background piece with several botanical sketches attached to it in a grid, to suggest a window, the changes outside the window, (and in my mind, Lillian’s joy in considering all sorts of color combinations) with Steve, and he like the idea, so it was a go. He also chose several of the my sketches and let me know Lillian’s favorite flower was a daisy, and left me to the creation! I played around a bit more with the colors, and realized that I wanted to make a total of 8 sketches. The budget and size of her office dictated a 2 x 3 grid only, but I was quickly in love with the idea that she would have two extra sketches to play with, swapping them out and rearranging them whenever she felt like it.

So, Christmas came and went, and then I had to work through the other commission quilt. And then get ready for the Spring semester. And then…figure out how I was going make these sketches movable on a larger background. Velcro – right? I sew through it all the time to attach it to my bags: my thought was to  sew the loop (softer) side to the back of the peltex/ batting sandwich, THEN add the front fabric, and create the botanical sketch, stitching through the Velcro when it happened that a part of the flower I was stitching would be over the top of the Velcro. I would then stitch the hook portion to a large piece of fabric and wrap that around some stretcher bars. Problem solved – so I thought! The week flew by (1st week of classes is always exhausting) so I didn’t get to try this out until Friday night.

You probably know by now with all my blah blah blahing about this that it didn’t work! Whenever I stitched over the Velcro several stitches would skip! ARGH! Much Gnashing of teeth! I used self adhesive velcro several years ago to mount these quilts onto a large stretched canvas, painted black:

I spent a long time thinking through other construction methods, but at some point I finally went to JoAnns to see what else there was in the world of Velcro. Lo and behold – there is a new type of velcro that is FUSIBLE! So I took some home and gave them and try – worked like a charm! Now, I wouldn’t use this velcro on a bag that got opened and closed several times a day – but it certainly held up to my tests on the prototype.

Another construction issue to tackle was placing the velcro on the fabric of the background BEFORE the fabric was wrapped and stapled around the stretched canvas and allowing for some wiggle room for placement of the botanicals if the fabric wasn’t stapled exactly in the center. I decided to place the velcro in a bit from each corner – in order to make this placement consistent, so each botanical could be placed in any spot – I quickly made some templates  and used them to place the fusible velcro. 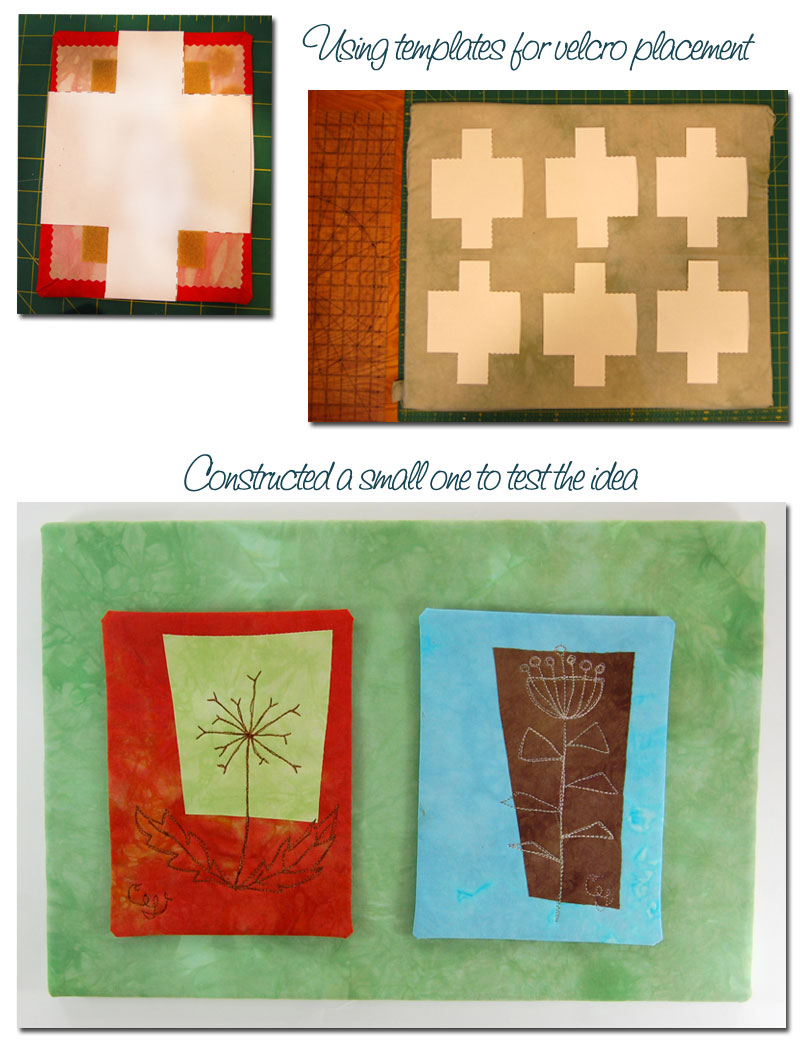 The point of this post – so much of what I do is trouble shooting construction details! The creation of the art itself (which you’ll see tomorrow) was a very small portion of the time spent working on this piece. Thus:

P.S. This weeks assignment on Blogging my Passion is to discuss an obstacle I overcame – how did Tara know I’d have an obstacle to overcome this week?  😉

p.p.s. I very often have obstacles so I’m sure something else would have presented itself if this assignment were in week 12 !

← Haiti: How can we help?
Construction on the Botanical Quilt Continues →