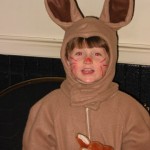 Hooray – Halloween is on a Saturday…we’ve got all of tomorrow for pumpkin carving, costume making…no Halloween decorating for me though, I’m just not that into it. In fact, I’m not much into decorating for any specific holiday, except Christmas. I love making my house look good, and I like changing it…but now for a holiday. One big reason: storage! Where does all the stuff go when it’s not out and around the house? Another reason: time. Big surprise, I like to do things myself, and I usually run out of time.

Case in point – my kids Halloween costumes. I abhore store bought costumes, always have, I used to make some pretty crazy contraptions in my youth. (I remember making myself into a Hershey’s kiss with oaktag, a stapler, masking tap and tinfoil. Where are the old pictures when you need them???) Any old who, I’ve made costumes for my boys since Liam was an 8 month old Piglet. As they’ve grown older, I’ve tried to include them more and more in process. But I do encourage them to re-wear the better ones from year to year.  SO I had a fun digging out photos from my hard drive, so here’s a look at the Glendening family through their digital years. If you need to see more, I’ve but a whole load here, but for most of you, I’m sure these will suffice!

Liam is 4.5, Logan is 6 months. After 3 years a “Blue” from Blue’s Clues (no digital pix, but you’ll see the costume in a couple of years!) Liam really wanted to be a red Kangaroo, so of course Logan had to be a Joey! We went trick or treating at the Columbus Zoo and the boys got Lots of smiles! 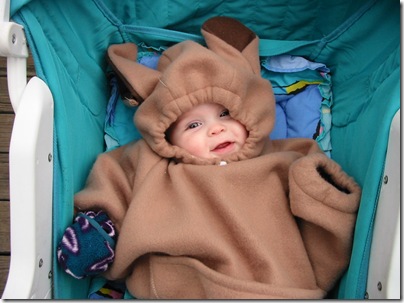 Dear God, is he the cutest baby ever, or what? 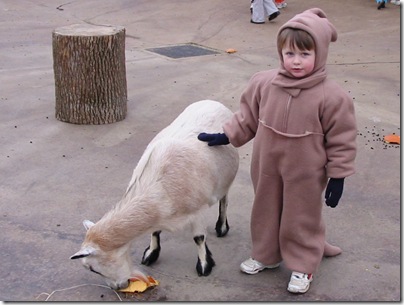 Instant replay! WooHoo, THAT was an easy year!

Here’s Liam’s Blues Clues Costume, back on Logan! Liam was a mad scientist – easy peasy, borrowed a lab coat and geeky looking science plastic stuff & driy ice from my work. Phew! They were both happy! 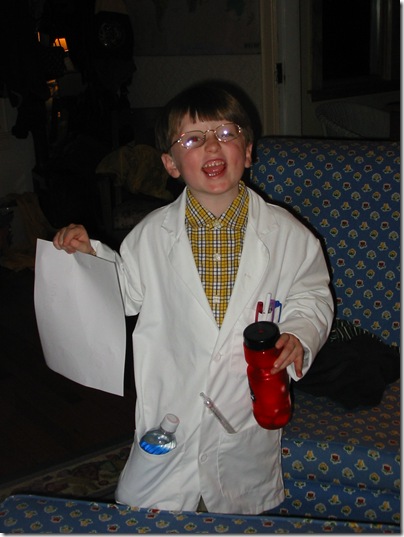 Our 1st year in CA, Liam was a werewolf, Logan wanted to be Blue AGAIN, and I’d left the costume behind in OH, so had to make ANOTHER one! Oh and…it’s  still hot in CA on Oct 31! 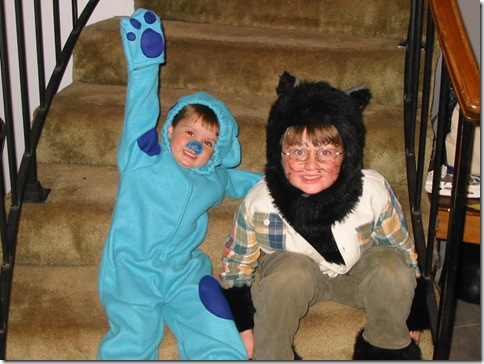 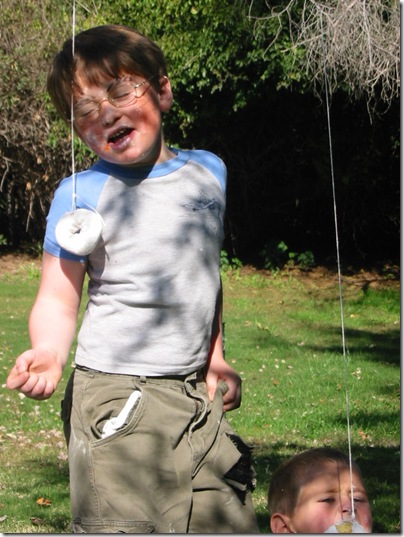 Gotta love a good thing! Logan was Blue AGAIN! Liam wanted to be a vampire…so I made a nice cape in hopes it would be used for dress up as well as Halloween. They haven’t used it for dress up (they were never that into that) but it’ll be seen again! 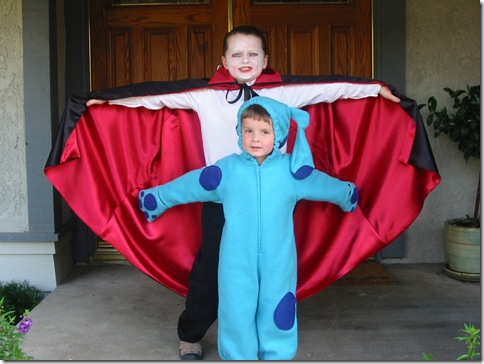 No more Blue from Blue’s Clues! But LOOK, the kangaroo costume is back, and it’s year # 2 for the vampire – this year Liam allowed more makeup and wore the fangs. And if you look closely, you’ll see that Logan’s beloved corduroy has his OWN little kangaroo costume! Can I hear a big AAAWWW! 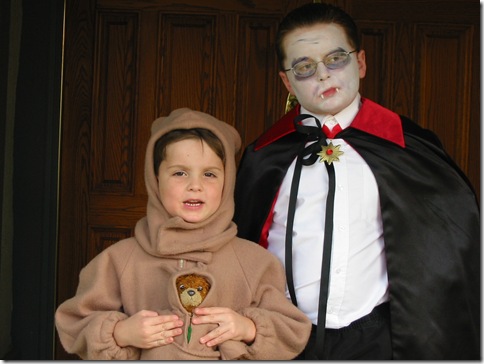 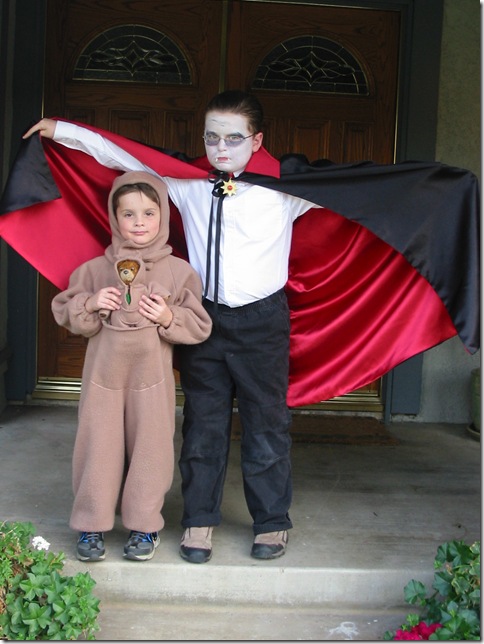 As the boys get older, their ideas get more elaborate! This year needed a LOT of help from Daddy as they made the “Spooky Express”. I was not very present for this year, having just finished doing my 2nd ever show, the big one I just finished 2 weeks ago. And, I totally caved on the no buying things this year. I bought the hats for both boys as well as the watch on a chain for Logan. We were very lucky to have the navy suit jacket as a hand me down in the closet. 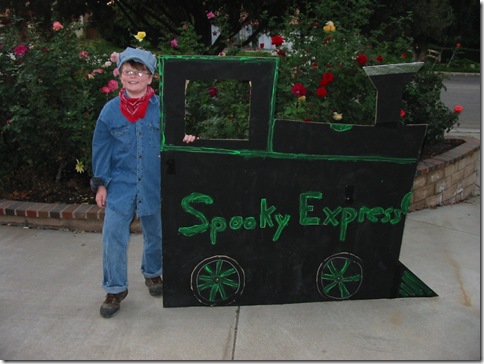 This was the year of way too much stress. My hubby was playing a concerto the very next night, I’d just finished Art for Heaven’s Sake, the costumes really got the short shrift this year. All I got was one picture, with only Logan in his costume, a “caveman” costume that was just a piece of fleece, cut and pinned to stay on. Liam was a vampire again, but had a “gig”, playing with his jazz band in the middle of the center of town trick or treat extravaganza. 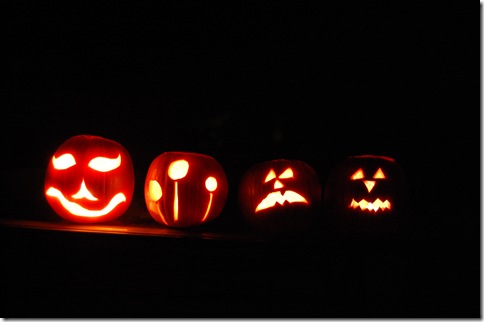 Let’s hope I get more pictures this year! If I do, you know you’ll see them here!

P.S. I just re-read the entry I referred to just the paragraph above, and it seems that a year ago, I didn’t feel like putting too much family stuff on the blog, and I didn’t want to blog if I weren’t blogging about making things. 1 year later I say HAH! to that! I’m now delighted when I have time to share some of the things & people I find are inspirational, and now am limited by time, not intent. What has changed in that year? I think that last year my blog felt like a diary, and now it feels like a conversation. I LOVE THIS CHANGE and am so HAPPY that it’s happened. Don’t look now, folks, Candy just had a big  “a-Hah!” moment!

8 Responses to Getting in the Spirit!