I’ve been MIA the last few days – our house was tented for termites, so we had to evacuate from Monday thru Wednesday morning.This involves taking anything edible and double bagging it in special bags. Now, even though they said that as long as the food was protected, everything was safe from fumes, I really could NOT move back into the kitchen without cleaning everything we cook with…as well as cleaning all the cupboards, etc… Now, this even was long overdue, but I’d rather have done it a cupboard at a time, rather than all at once. It gave me an excuse to do some serious unclutttering, which was awesome. But the only thing creative I’ve done this week is reorganize kitchen cupboards, so that’s all I’ve got to show you: 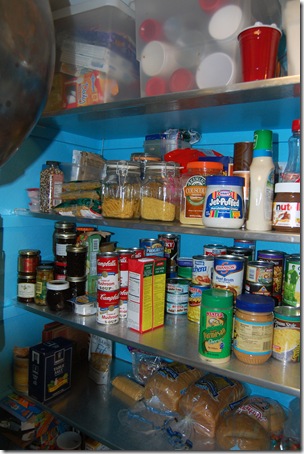 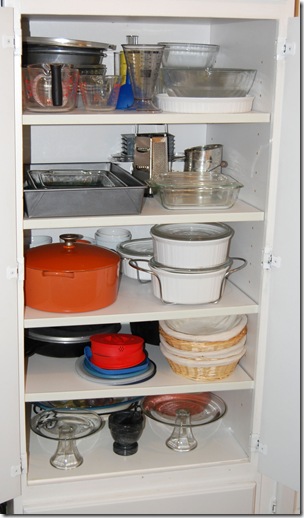 I also generated a number from the giveaway that ran until Tuesday… 1st of all, the comments really made for a swelled head – thanks y’all, I’m glad to see that you can find so much to like in my blog. Thus…# 16 come on down, you’re the next winner! It’s Mary W. who commented:

…So I went back and read every post on your blog, and I think that my favorite thing is that you are doing something you love! It’s so inspirational to me, a person who has yet to figure that out…

WooHoo! What an awesome comment. Yes, I AM doing something that I LOVE! Actually, I try to do as much of that which I LOVE and as little of what I DON’T. I could really expand on this point, because it goes a long way to explaining how I can do the things that I do every day…but simply said, I try to not spend lots of time doing things that i hate…it could be little things like I don’t watch commercials (thank God for Tivo!) or it could be big things like NOT being involved in unproductive relationships.

But right now, I wanna go downstairs and watch some commercial free TV with the Hubby, who was an awesome help today – he’s also great at decluttering stuff…when I get him focused in that direction!